While ‘baroque’ is one of the words most commonly used to describe Valletta, the revival that the city is undergoing has led to talk of the city’s renaissance era.

“Ever since Malta joined the EU, one of the main priorities of successive governments has been the restoration of Valletta to its former glory. However, the country set to hold the EU presidency in 2017 and the city named European Capital of Culture in 2018 really set the wheels in motion – to say nothing of other honours conferred on it, including hosting the Valletta Summit on Migration and the Commonwealth Heads of Government Meeting. In fact, more money has been spent on Valletta in the past eight years than in the 20 years before that,” says Valletta mayor Alexiei Dingli.

“The focus on Valletta isn’t surprising – not only is the city an architectural gem, visited by millions every year – it is also a living symbol of what we were, what we are, and what we would like to be.”

‘What we were, what we are and what we would like to be’ neatly sums up the culmination of Renzo Piano’s master plan for the renovation of City Gate, which came to full term this year with the opening of the much-talked about parliament building’s doors.

The mayor has noticed a seismic shift in the way the newest Valletta landmark is regarded by the Maltese. “The negative comments about it have all but vanished – the Maltese are proud of this project and they recognise the importance of having such an entrance to the city. It has been hailed by various people from all walks of life and featured in the most prestigious architectural and design magazines in the world. The latest feature will be in Monocle where they sent a crew just for it, a few weeks ago. Ten years ago, people came to see our Caravaggio. Today, they’re eager to see the Renzo Piano project as well. It fits perfectly with our idea of a city which respects its past while also looking forward towards its future as a modern European capital city.”

“The rejuvenation of Valletta is thanks to the hard work of many different entities, such as the Valletta Regeneration Project and the Valletta 2018 Foundation,” says MTA CEO Paul Bugeja. “Some of the projects these foundations were involved in include the Renzo Piano Parliament and City Gate project as well as the works carried out in Strait Street, which go hand-in-hand with the planned regeneration of the covered market and the old civil abattoir. The MTA endeavours to promote various events in Valletta all year round, so we are very pleased to be able to support events as the Malta Fashion Week, the Malta Arts Festival, the Malta Jazz Festival and Notte Bianca, many of which are taking place in Valletta’s refurbished spaces.

The focus on Valletta isn’t surprising – not only is the city an architectural gem, visited by millions every year – it is also a living symbol of what we were, what we are and what we would like to be

“The city’s increased popularity has led to the number of boutique hotels increasing exponentially, which, in turn, has led to more tourists choosing Valletta as their ideal destination for a short city break.”

Valletta’s restoration is also having a ripple effect on the areas and facilities which surround it. “The regeneration of Valletta is certainly augmenting the cruise passenger experience, as well as serving as the gateway to the Valletta Waterfront through the Barrakka Lift,” says Valletta Cruise Port CEO Stephen Xuereb.

“The port of Valletta is the gateway to Malta’s rich historical and cultural experience. It offers a warm welcome – the old buildings have been restored with sensitivity to their former grandeur and they now house a number of lively restaurants and bars, shops, office space and other amenities.

“To cruise into Malta’s Grand Harbour is to arrive in one of the world’s most breathtaking and historic ports. Research which we regularly conduct shows that passengers are pleasantly surprised by their stay in Valletta, would like to return for a longer stay and will recommend a visit to Malta to their family and friends.”

For many years, before it was eclipsed by Sliema’s more modern and high-end establishments, Valletta was one of the hottest destinations for Maltese shoppers. Has the regeneration of the city managed to breathe new life into the local retail community?

“The current retail environment is picking up but we definitely need more branded retail outlets to generate business,” says Gordon Schembri, the managing director of 113-year-old Ascot House, one of the oldest Valletta shops still in operation. 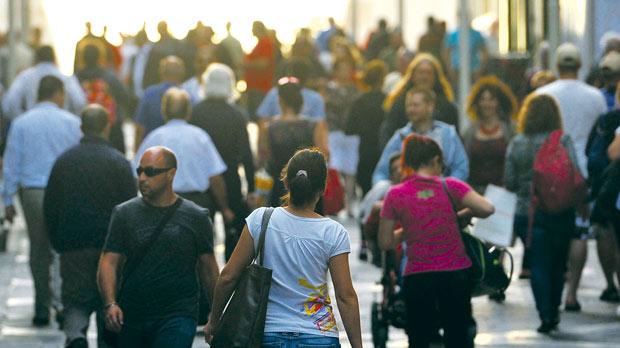 “My clients look for quality goods, an excellent after-sales service and, above all, exclusivity – over the past years they have become more demanding and more fashion conscious.” Claire Abela, general manager of Franks, agrees. “Most of our customers in Valletta are people who come into the city for work. While we have seen increased footfall in other localities, the bulk of retail business has moved away from Valletta. We believe there is more work to be done to make Valletta a shopping mecca. Big retail brands and outlets cannot be found in Valletta – a more concentrated effort is needed to attract business owners and retail brands to set up shop in Valletta as this will surely entice more people to shop in the city. As it stands, the high price of rent cannot justify the comparatively slim footfall of the location.”

Both Schembri and Abela point out that the lack of parking within the city remains a major problem for shoppers and could be a discouraging factor. While it may have lost the retail crown to more accessible and contemporary locations, the explosion of hip new pubs, wine bars and eateries in the capital city has made it a hugely appealing destination for lunching with friends or a lively night out.

Michael and Daniel Cauchi, a father-and-son team who run Michael’s restaurant in the building known as L’Hostel De Verdelin – the premises of the former Civil Service Sports Club – cater to a variety of patrons.

“The gastronomic world has changed completely from when my father had his first restaurant, so we try to incorporate traditional with modern cuisine by improving the presentation but without losing quality. We see different types of diners in Valletta, varying from lunch to dinner. For lunch, we usually get people coming in from different offices for a quick bite or a comfortable place to host visiting guests. We also get several requests from destination management companies for hosting tourist groups that opt for set menus. When it comes to dinner, our clients are generally looking for a fuller meal and a dining experience – especially tourists. This has been quite consistent for the past three years,” says Daniel, the younger half of the team.

While we have seen increased footfall in other localities, the bulk of retail business has moved away from Valletta. We believe there is more work to be done to make the capital city a shopping mecca

“From our point of view, dining in Valletta is more appreciated by foreigners than Maltese clients. However, in recent times, the events held in the capital and the renovation of Strait Street have started to make it more of a destination for the locals as well.

Dean Falzon runs StrEat in Strait Street, a whisky bar and bistro where patrons enjoy a selection of more than 180 whiskies from all over the world. “In the past few years, Valletta has seen a complete turnaround when it comes to nightlife. There are many more places to go for entertainment; be it theatre or movie, fine dining, or meeting friends for drinks. We cater to the customer who is looking for a relaxed and pleasant dining experience. Our bistro is both cosy and inviting, with original architecture and a beautiful ambience to dine in.”

Like Daniel Cauchi, Falzon believes that the cultural and social regeneration of Valletta will not only bestow upon the city a more permanent appeal beyond the novelty factor which draws in tourists but also fuel the food and beverage industry. “Valletta has beautiful squares and open areas scattered around the city, most notably Pjazza San Ġorġ in front of the Grandmaster’s Palace. These areas are ideal for performance events, art exhibitions and festivals. These kinds of events would bring new life and increased interest to our beautiful capital city.”

One such organisation contributing to the city’s cultural pulse is the Malta Philharmonic Orchestra, whose recent ventures include the launch of the Cosmos Wind Ensemble’s CD entitled Premieres, in collaboration with V18. Cosmos – which consists of five Malta-based musicians in a dynamic chamber music ensemble – recently performed in Australia as part of the CHOGM Culture Outreach Programme and will be performing in Frankfurt next, as part of the ECB European Culture Days.

At the launch of the CD, Sigmund Mifsud, the executive chairman of Malta Philharmonic Orchestra, said that Maltese businesses and the cultural sector thrived off each other’s success.

The MPO will also be participating in the prestigious and highly-anticipated Valletta International Baroque Festival, which runs from January 16 to 30 and places the city’s baroque identity at centre stage through a celebration of music from the period when it was built, produced and managed by the Manoel Theatre.

“The annual Valletta International Baroque Festival has now taken its place among the major baroque festivals on the global cultural map, attracting a new type of visitor to our city and reviving activity during the leanest of months,” says Michael Mangion, the Manoel Theatre’s PR and marketing manager. “ Manoel Theatre’s response to the growth of Valletta as an entertainment location, as opposed to it just being a daytime working city, is to continue to provide and develop its eclectic programme of performances covering most genres of music, dance and drama.”

Last year, Remax Malta’s chief operating officer Jeffrey Buttigieg commented that the continuing embellishment of Valletta would allow it to develop into an ideal real estate investment opportunity, with a huge boom to take place over the next 18 months and beyond. Twelve months later, with Valletta properties selling like hot cakes, time has proved him right.

“I would say that there is a larger increase in demand for Valletta than there has been for a while. Valletta is seeing a natural surge in popularity which can be attributable to the increase in commercial activity in the capital over the last three to five years,” he says. “There is still a limited supply of property, thus keeping the properties in high demand, which will only increase as new properties are renovated. It’s a solid investment with no hint or risk of a bubble. We suspect that 2018 will be the year for Valletta, when it will officially hold the title of EU Capital of Culture.”