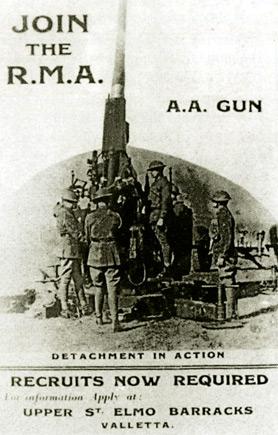 On April 3, 1942, at the peak of the Battle for Malta, King George VI sent a message to the Governor and Commander-in-Chief of Malta to inform him that he had been watching with admiration the stout-hearted resistance of all in Malta, service personnel and civilians alike, to the fierce and constant attacks of the enemy. He went on to say that it gave him great pleasure to assume the Colonelcy-in-Chief of the Royal Malta Artillery, in recognition of their skill and resolution – a high honour indeed, especially as the regiment was singled out when Malta was literally on its knees.

Boosting the troops’ morale was, no doubt, a consideration, but the royal gesture was also very richly deserved. The King was already the Colonel-in-Chief of the Royal Artillery. A few days later, on April 15, the King awarded the George Cross to the Island Fortress of Malta so as “to honour her brave people and to bear witness to a heroism and devotion that will long be famous in history”.

In April 1942, the Royal Air Force in Malta was going through its biggest crisis ever. Between the 8th and the 20th of the month there were hardly any serviceable Hurricanes left; there were four serviceable on four of the days, two on two days, one on five days and none on the other two remaining days.

A batch of Spitfires was flown in on April 21, but 16 of them were immediately destroyed on the ground by enemy action and about 30 others were damaged and required repairs before becoming fit for operations. For the rest of the month, the number of serviceable RAF fighter aircraft averaged four, and when any of them were airborne, they could only operate safely if they flew at around 4,000 feet.

During April, the Luftwaffe carried out 4,002 sorties, dropping an estimated 6,700 tons of bombs; the RAF lost over 200 aircraft.

In April, both heavy anti-aircraft and light ant-aircraft guns were almost continuously in action, firing 70,238 and 90,591 rounds respectively, and this in spite of an imposed restriction of 16 rounds per gun per day because of the heavy expenditure of ammunition.

Bombers were only to be engaged before dropping their bombs and fighters were not to be engaged at all. During the first four months of 1942, 48 gunners were killed by enemy action and 93 were wounded.

By the end of April, the gunners had become national heroes. The Times of Malta reported in large letters on its front page that AA Gunners had shot down 101 enemy aircraft during April.

The AOC (Air Officer Commanding) Malta, Air Vice-Marshal Hugh Lloyd, wrote to the MGRA (Major General Royal Artillery) CT (Joe) Beckett, “to express my admiration of your officers and men for the excellent way in which they are defending this Island”; and after he had personally watched gun sites firing during heavy raids, regardless of their safety, “for sheer guts, determination and hard work, your men can never be beaten”.

He ended after even many more plaudits: “Well done – all of you. Magnificent.” On a later occasion he remarked: “If it was not for the soldiers we should be out of business.”

The Governor, Major General Sir William Dobbie, had this to say on March 23, 1942, probably after watching the raids from the roof of San Anton Palace: “I have been much impressed by the work of the AA gunners lately and have admired the way they have risen to the occasion in dealing with the many heavy attacks on Ta’ Qali...”

This is of interest also because at the time, 2nd HAA Regiment RMA was deployed with the defence of Ta’ Qali airfield as its main objective; RHQ was at St Paul’s Bay and its 48 guns were deployed at Wardija, Salina, Nadur (Binġemma Heights); il-Beżbiżija (Tarġa Gap facing Ta’ Qali); Birguma and Ta’ Ġiorni. Even Joseph Stalin sent his good wishes.

But perhaps the best appreciation of the situation was made in 1943 by General Ian Hay in his book The Unconquered Isle – Malta: “If it was the Royal Air Force which finally deprived the Luftwaffe of the command of the air over Malta, it was the Royal Artillery which saved the island during those hectic and critical months in early 1942.”

And the word ‘saved’ was correctly used, as all plans by the Axis for the invasion of Malta in April had been completed and approved. With no anti-aircraft guns to harass the planes dropping troops by parachute, and gliders landing with more troops and heavier equipment, it would have been practically a walkover.

Lance-Corporal Ron Jones of the Welsh Regiment described, among many more hardships, how he and his mates were treated after being captured in Benghazi in January 1942: “In a camp outside Rome, we were herded on to cattle trucks – 40 men to a truck – with no food or water for the four days it took to transport us to Poland, where we worked in a local chemical works… It was so cold that many died of frostbite… There were 250 of us; only 150 survived.

This is how our troops would have fared had Malta been conquered; the civilians would not have fared much better either. In countries overrun by the Germans, civilians had a very bad time indeed – summary punishment and even summary execution was the norm. At the time, most of mainland Europe was under Nazi domination.

Malta stood alone; the nearest friendly ports were Gibraltar to the west and Alexandria to the east – both close to a thousand miles away.

In February, Adolf Hitler had told his generals that he was in complete agreement with the Italian Command for an invasion of Malta in April. The Germans were to contribute a parachute division, a number of heavy tanks and some 666 aircraft, including 300 transport aircraft, mainly Ju52s (troop carriers).

A certain Italian general, Giacomo Carboni, in command of the Friuli Division training for the assault of the cliffs of Malta, may have influenced the decision on the date of the invasion. He was convinced that the invasion would result in heavy casualties and nothing would come out of it; he tried to persuade every important person he met, including Count Galeazzo Ciano – Benito Mussolini’s son-in-law.

The invasion was to coincide with Erwin Rommel’s thrust in April to dislodge the British forces from Benghazi. It was first postponed because the Folgore parachute division required more training, and then for various other reasons. Eventually it was cancelled altogether, after Rommel’s successful push of the British 8th Army to Egypt’s border – to the relief of many Italian generals.

Maybe Carboni’s pessimism, and the fact that he had an American mother and that he had been dismissed from the Secret Military Intelligence because of his anti-German attitude, may have had something to do with it.

The invasion would have also involved the rest of the Royal Malta Artillery in Malta – 1st Coast Regiment and 5th Coast Regiment.

The two regiments shared with 4th Coast Regiment RA the responsibility of providing the artillery defence of Malta’s coast. Fort St Elmo, occupied by a battery of 1st Coast Regiment, had been attacked by Italian bombers in the early hours of June 11, 1940, just hours after Mussolini had declared war on Britain and France. It was hit by four bombs, killing six soldiers and wounding five others as they ran to their posts.

The same regiment, however, paid back the enemy with interest on July 26, 1941, when the Italian Navy tried to enter Grand Harbour to destroy the ships in port. They used torpedoes, steered by two men until the very last moment, and explosive motor boats, powered by a 200-horsepower Alfa Romeo engine capable of 30 knots.

The Light Flotilla had attacked Gibraltar and Crete with some success. The attack on Malta, however, was a complete disaster; none entered the Grand Harbour and the only damage was to bring down one of the two spans of the breakwater bridge, which was recently replaced.

The RMA battery had taken the lead in this engagement by raising the alarm and scoring a number of direct hits; they were joined by LAA guns within range – also RMA – by a machine gun post of the Cheshire Regiment, and finally, at first light, by a couple of RAF Hurricanes that finished off the remaining few trying to get away, and so completed the rout. Civilians in Tower Road, Sliema, had a grandstand view of the engagement and cheered every time there was a direct hit.

This is what the chief of the Imperial General Staff had to say: “Please convey my congratulations to all ranks of the RMA manning fixed defences on their great success in breaking up the determined enemy seaborne attack on Grand Harbour.

“The action of these gunners has excited universal admiration here in the United Kingdom. The skill and determination shown by them will act as a strong deterrent to future enemy attacks by sea.”

Perhaps General Carboni had this attack in mind when he had expected heavy casualties in an invasion.