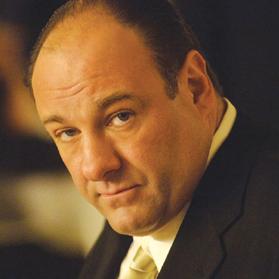 The Sopranos stars James Gandolfini as mobster Tony Soprano who struggles with domestic life as he orders mob hits and confides in his psychiatrist.

The New Jersey mob saga The Sopranos was listed as the best-written US TV series above comedy show Seinfeld in a list compiled by the Writers Guild of America.

The guild, which represents writers in the motion picture, broadcast, cable and new media industries, released its ranking of the 101 best-written TV shows based on a poll of its members, with comedies and dramatic series evenly represented in the top 10.

The guild favoured recently-produced shows. Only one top 10 entry, third-placed The Twilight Zone, predated the 1970s and nearly half the entire list aired in the past decade. In releasing the list, the guild’s Paul Brownfield said: “No show has been more responsible for TV’s storytelling renaissance.”

In the HBO hit, mobster Tony Soprano, played by James Gandolfini, struggles with domestic life even as he orders mob hits and confides in his psychiatrist.

No show has been more responsible for TV’s storytelling renaissance

Comedies joining Seinfeld high in the poll included 1970s-era hits as All in the Family, The Mary Tyler Moore Show and M*A*S*H, along with bar-room comedy Cheers.

The West Wing, The Wire and Mad Men, the only currently airing show, rounded out the top 10.

Long-running animated show The Simpsons was ranked 11th, followed by the 1950s hit I Love Lucy. The Daily Show With Jon Stewart at 17th placed highest among series outside the scripted comedy or drama format.

Coming in 43rd, PBS’s Downton Abbey was the highest-ranked non-US series, followed by the BBC’s The Office in 50th place.

While most of the series on the list were hits in their day or at least enjoyed a steady run, the short-lived Twin Peaks (35), Friday Night Lights (22) and the cult series Arrested Development (16) also fared well.

And while NBC, CBS and HBO were all represented in the top 10 with multiple entries, the list’s highest-ranked ABC series was the comedy Taxi in 19th, followed by Lost in 27th place.