This was the first air disaster in Malta of the post-war period. Four crew members and 16 residents died in the incident, a high peacetime death toll, and others were injured. Eighteen houses were destroyed or damaged and had to be evacuated, leaving 72 families homeless.

The naval aircraft took off from the Ħal Far Royal Air Force airfield, and although it was said that smoke was seen billowing from the plane before the crash, the magistrate’s inquiry report said otherwise. It was also said that the pilot had tried to make a forced landing in the fields below Tal-Virtù to avoid hitting the church and the school, just 150 metres away from the air crash area.

Friends and relatives rushed to the scene hoping to find their loved ones alive, and when more people arrived, the police cordoned off the area. Several hundred naval ratings, some British troops, RAF personnel, demolition and clearance rescue squads, medical officers, paramedics, police and civilians rushed to the spot and set to work in a frantic endeavour to save life and limb. A policeman and a member of the demolition crew were injured when masonry fell on them.

Fire engines from the Dockyard and more fire-fighting equipment from the neighbouring Ta’ Qali aerodrome were used, and the naval authorities provided generators so that the rescue operation could continue during the night.

The salvage operation was delayed by the spreading fire and the lack of water for fire-fighters. Another obstacle facing the rescuers was the pile of debris of the destroyed buildings.

A naval father and several priests performed last rites besides giving a helping hand in the rescue operation. The clergymen helped to remove the mutilated and charred remains of the victims from the debris and put them in small white sacks. 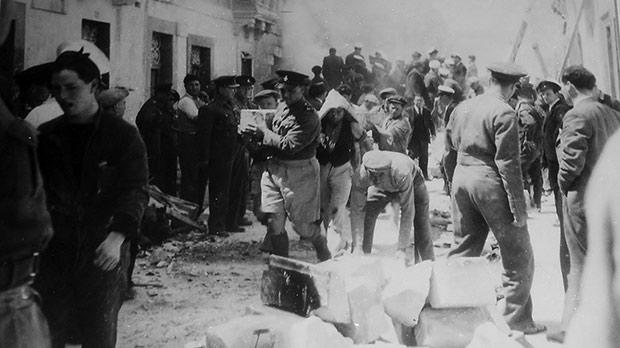 Ġuża Dimech, Marija Bugeja, Salvu Xerri, Anġela Galea, Tereża Dimech, Ġanna Tarpen, Marija Muscat, Karmenu Dimech, Dolor Debono and Ċikku Muscat were among those found alive amid the rubble of collapsed houses. They were rushed to Bugeja Hospital in Ħamrun. Among the first victims found were a mother and her baby.

Four crew members and 16 residents died in the incident, and others were injured. Eighteen houses were destroyed or damaged, leaving 72 families homeless

Governor Sir David Campbell, Archbishop Mikiel Gonzi, Vice-Admiral Sir Frederick Dalrymple-Hamilton and the Commissioner of Police visited the scene of the crash. Earlier that day the vice-admiral had sent a message to the Governor and the officer administering the government, offering heartfelt condolences and sympathy to the victims, their families and all those whose lives had been affected by this tragedy. 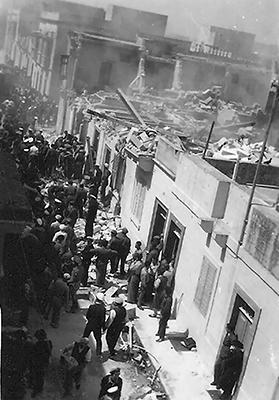 Some of the damaged houses.

Alternative accommodation was provided to the 72 families whose homes had been destroyed or damaged. Clothes, food and other necessities were provided to those affected by this air disaster. It was said that the total amount of damage caused by the disaster amounted to about £11,000, a considerable sum for those days.

The morning after the crash, two representatives of the Surveyor of the Lands Department (H.M. Dockyard) inspected the zone of the disaster. Meanwhile, Magistrate Albert Camilleri conducted an inquiry into the crash. In his report, he said that the aircraft took off at 10.50am after it had been declared airworthy by one of the crew, Reginald K.W. Hathorn. 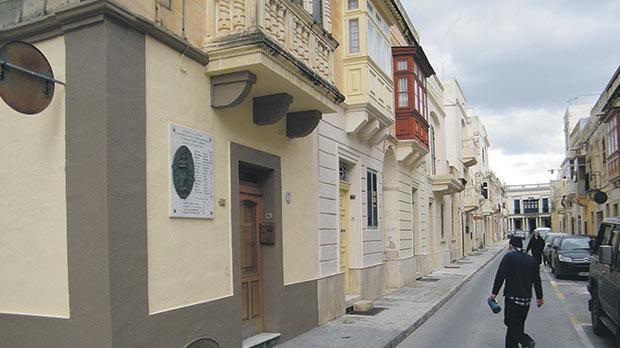 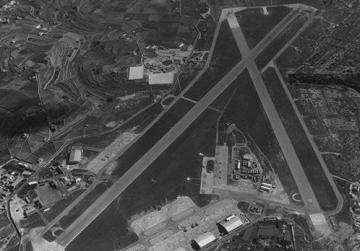 Ħal Far RAF airfield from where the bomber took off.

The Spitfire attacked three times from above and at the same level as the Wellington, and after these attacks, the Spitfire dived down low so as to attack it from below. By this time the two planes arrived west of Rabat and the Wellington seemed to be at a height of between 4,000 and 5,000 feet when the Spitfire started the manoeuvre. It was then that the Wellington turned to port and started to dive, pointing towards east and diving at an angle of 20 degrees.

The Spitfire followed, but when it reached a certain height it broke off the dummy attack and kept watching the Wellington in its dive, until it was seen skidding along the roofs in St Mary Street, between Count Roger Street and St Publius Street, to then explode.

Although there was no positive proof, there was a possibility that a leakage of hydraulic fluid, which might have released some fumes, had rendered the Wellington’s crew unconscious

No sign of fire was seen before the explosion. Nor did it appear that the Wellington was in difficulty: in fact, no SOS was received by the operation room at Ħal Far.

The magistrate report concluded that it was difficult to establish the exact reason of the crash, but although there was no positive proof, there was a possibility that a leakage of hydraulic fluid, which might have released some fumes, had rendered the Wellington’s crew unconscious. 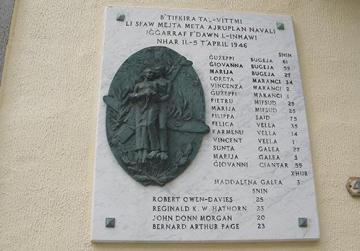 The memorial plaque with the names of the victims.

In an interview on January 20, 1989, 68-yerar-old Emmanuel Camilleri recalled the horrific incident. Camilleri had a tailor’s shop at 54, St Publius Street, and he lived at number 51. A few minutes before the plane crashed, he went home to have a cup of coffee, and when he returned to his shop he heard a loud explosion and felt a tremor when the plane crashed.

Together with his employees, Camilleri rushed outside the shop and saw the area filled with debris. His residence, however, was not destroyed. The wrecked and demolished houses started from number 52 till the end of the street.

Camilleri’s father, who was sick at home, was buried under the debris. Felicia Vella, Camilleri’s sister, aged 35, together with her baby and 14-year-old son also lost their lives. According to the interview, the baby was found under the wreckage of the plane. The bodies of Vella and her two children were found in the basement of her residence. 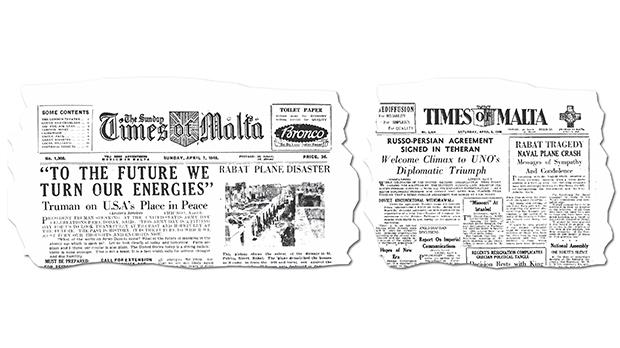 In his interview Camilleri des­cribed the dreadful moments when he was asked to identify the bodies of his relatives at the hospital. Vella’s body had been was burnt but was not beyond recognition.

Among the survivors and relatives of the deceased there were some who lost as many as four relatives, but perhaps the saddest and most touching plight was that of two surviving children – a four-and-a-half-year-old girl and a 20-month-old boy, who lost their parents.