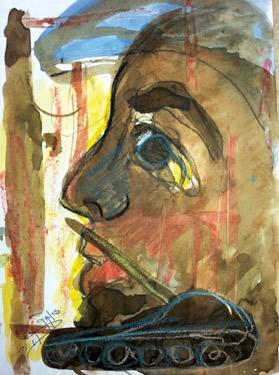 Two women whose families fled Gaddafi’s regime have landed in Malta to spread a message of new hope, reflected in the work of Libyan artists who are exploiting their newfound freedom of expression.

When Najlaa El-Ageli and Nessrin Gebreel held an exhibition in London, fellow Libyans travelled from all over to look at art suppressed for more than 40 years.

“Libyan families came all the way down from Manchester.

“Finally they had something good to talk about, something they could feel proud of,” said Ms Gebreel.

Ms Gebreel, 41, was talking at the St James Cavalier Centre for Creativity, in Valletta, with her co-founder of Noon Arts, Ms El-Ageli.

The women have set up an exhibition by Libyans, most of whom were underground artists or even imprisoned during Muammar Gaddafi’s dictatorship.

Finally they had something they could feel proud of

Following exhibitions in Libya, the US and the UK, they came to Malta as they believe the island played an important part in the citizens’ fight for freedom.

The two have been friends for two decades and founded Noon Arts after the Libyan revolution to nurture established and emerging artists.

An architect by profession, Ms El-Ageli, 42, has participated in NGO projects involving sustainable solutions for small, poor communities in Egypt and Japan. At the moment she is setting up a project in Ubari, Libya.

While Ms El-Ageli’s family left Libya for the children’s education, Ms Gebreel was involved in the anti-Gaddafi movement.

They could not start something like Noon Arts before 2011 as the regime would have targeted their extended family.

“We want to give Libya a bit of confidence and help Libyans feel proud of our heritage and culture,” Ms Gebreel said.

Following the revolution that overthrew the dictator, Libyans were given a sense of freedom they lacked for 42 years.

“Everything had to be scrutinised and given the go-ahead by the government. Some went through identity crises because of the oppression of freedom,” Ms El-Ageli added.

Before his dictatorship, they were united, as could be seen in numerous marriages between different communities.

Through Noon Arts the pair also hope to bring out women’s issues and their role in Libya.

The exhibition, A Libyan Lamma, is at St James until February 16. More information at www.noon-arts.co.uk.