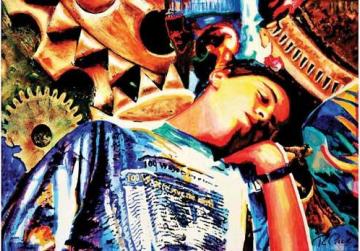 Whoever follows the artistic journey of Ray Piscopo will eventually notice that, under the new forms apparently defying any classification and beyond the appearance of figures of diverse nature, there is always the artist in search of something.

There emerge glimpses of a discovery still waiting to be completed. The artist is felt to be someone craving to transcend the outer layer of things. Every image he is presenting, whichever its specific subject, assumes the character of that object. A person resembles an object and an object evokes a photograph. 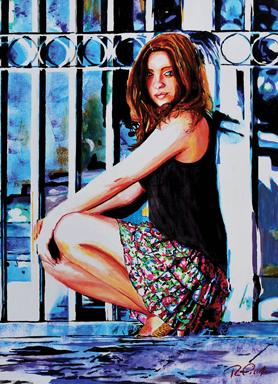 Here lies the artistic success of Piscopo, equally creative and morally-oriented. He departs from the observation of a common, average object and goes on delving until he reaches the level beyond which there is nothing. Or, at least, there is presumably no alternative entrance lead-ing to it. Here is his key theme and, through it, each paint-ing that seems to be locked can be opened.

Seen in this light, Piscopo is a realist painter, but his works are not faithful depictions of the outer world of objects. They are no reproductions of visual experience. They somehow look like X-rays, the ultimate layer underneath the skin, the subtle document of a condition meant to be the final one, the edge, the impenetrable wall beyond which the traveller finds him-self at the cross roads... the all or nothingness.

In other words, he seeks to penetrate the outer shell, hopefully to discover meaningfulness. For Piscopo, art demands moral justification and is not in any way an end in itself. His art disproves the idea of art pour l’art. The purpose of art is not art, but the discovery of meaning, ultimate, final, obtained through the depiction of objects with a ‘pen’ which records and interprets.

For Piscopo, art demands moral justification and is not in any way an end in itself

It is an intellectual sort of art which, however, does not sacrifice beauty to truth. Without this ‘intellectual’ outlook it remains what it is, free from any rational rigidity.

In this respect, Piscopo’s paintings do not simply evolve, as happens to any human thing set in time and space, but somehow resist evolution. In such a confrontation, presented visually, the inner conflict undergone by the artist can be detected. He does not merely create figures. He also interrogates them in terms of their why and what for.

These are challenges he deals with through the various modes in which he employs and mixes up colours, which are never a futile end in themselves, or technical, stylistic experiments.

Formal ambiguity, as frequently evinced in Piscopo’s works, is an expression of an ambiguity residing somewhere else, deeper than the outer layer, permanently stored under the poor surface. 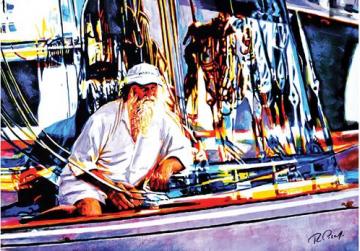 The Old Man and the Sea

Here are the confines of the meaning acquired by whoever merely looks at Piscopo’s works. Beneath the figures – human, animate and inanimate – there always stands the same artist, who paints in order to ask questions and experiments with technique in order to unearth whatever is constant and permanent.

These traits, typical of Piscopo’s most recent phase, at least deserve a twofold interpretation.

They are indicative of an experimental attitude in search of whatever is new and different and they also illustrate the joy of an artist who has succeeded in identifying his own consistent, habitual medium.

Here stands an artist who is simultaneously searching and finding.

The search and the discovery; the form which is both searched for and acquired; and the experience of yesterday and the prospects of tomorrow. Within these limits the real essence of Piscopo, the man and the artist, the person who thinks and the artist who reflects, can be identified.

The process of thoughts translated into imagery shows that the itinerary from thought to the creative act is an expression of the ­relationship between the man who simply goes through life and the man who feels the need to visually documenting inner experience.

Seen within such a context, this is intellectual art, a visual event, but one which is directed towards a layer transcending whatever is visual. It constitutes an invitation for all to reflect in virtue of a set of objects which Piscopo has come across along his way and which he is now able to transform into an art which is as mature in technique as it is clear in the message it conveys.

The Reasoning of Imagination runs at the Cavalieri Arts Hotel between December 12 and January 15.