A landmark discovery has shed new light on the origins of life in Britain – with archaeologists confident they finally know the identity of the country’s oldest town.

It had long been believed that Thatcham in Berkshire was the oldest continuous settlement in the UK.

But researchers at the University of Buckingham believe Amesbury, which is 64 kilometres west and home to Stonehenge, in fact holds the distinction of being the birthplace of history in Britain.

They say the new findings dismiss previous theories that the Wiltshire town was conceived by European immigrants – instead, relics uncovered during a painstaking search point to British settlers being behind the settlement, which dates back to more than 10 millennia.

David Jacques, research fellow in archaeology at the University of Buckingham, who led the dig, said: “The site blows the lid off the Neolithic Revolution (deemed the first agricultural revolution in Middle Eastern history) in a number of ways. It provides evidence for people staying put, clearing land, building and presumably worshipping monuments.

For years people have been asking: ‘Why is Stonehenge where it is?’ Now, at last, we have found the answers

“The area was clearly a hub point for people to come to from many miles away, and in many ways was a forerunner for what later went on at Stonehenge itself. The first monuments at Stonehenge were built by these people.

“For years people have been asking: ‘Why is Stonehenge where it is?’ Now, at last, we have found the answers.”

Carbon dating from an archaeological dig by the university shows that the parish of Amesbury has been continually occupied for every millennia since 8,820BC. 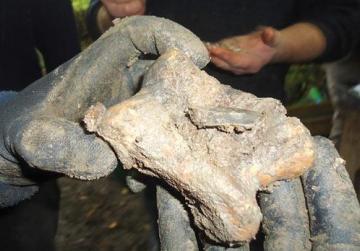 A bone and tool found at Vespasian’s Camp.

The origins of Amesbury have been discovered as a result of carbon dating bones of aurochs – twice the size of bulls, wild boar and red deer – following a dig at Vespasian’s Camp, Blick Mead, 2.5km from Stonehenge.

It dates the activities of the people who were responsible for building the first monuments at Stonehenge, made of massive pine posts, and show their communities continuing to work and live in the area for a further 3,000 years, close to the dawn of the Neolithic when Stonehenge was first built. 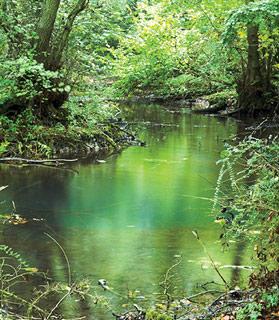 Archaeologists say the results provide the missing link between the erection of the posts between 8,820BC and 6,590BC, and of Stonehenge in 3,000BC.

The findings provide evidence which suggests that Stonehenge, rather than being seen as a neolithic new build in an empty landscape, should be viewed as a response to long-term use of the area by indigenous hunters and home-makers.

Further findings appear to shed light on the persistent use of domestic farming techniques at Blick Mead, now believed to be used by settled communities rather than nomadic peoples.

The dig, which took place in October and was funded by the University of Buckingham, also unearthed the largest haul of work­ed flints from the Mesolithic period.

During a six-week dig, 31,000 flints were discovered in a 16-square-metre area and more than 2,000 were found in a one-square-metre – the largest concentration of such finds in Europe.

Bill Dunn, from the Amesbury History Centre, said: “We are naturally delighted at the confirmation of Amesbury’s long­evity as the oldest continuous inhab­ited place in England. We have always known Amesbury as somewhere special and this confirms it.”

Things to know about Amesbury

• The Guinness Book of Records has confirmed Amesbury is now the oldest place in Britain dating back to 8820BC. Thatcham, which had previously held the record, is aged at 7700BC.

• Amesbury is home to a royal burial site, with Queen Eleanor of Provence (consort to Henry III) being buried at the abbey – now a residential home. The exact location of her burial was never marked.

• Stonehenge, the iconic landmark and tourist attraction, was once owned by the town council.

• Every year, Amesbury’s residents are handed a free visitor’s pass, providing they can prove residence of the town.

• In 1965, The Beatles checked into the Antrobus Arms Hotel in Amesbury, their home for the next three days whilst on location filming for their film, Help!

• Amesbury is served by the A303 – a 92-mile road linking the M3 west of London with southwest England. The road, which runs parallel with Stonehenge is notoriously busy at the start and end to school and public holidays.