The euphoria created by the extension to Mtarfa did not last long. A tramway operator with a global track record, Macartney, McElroy & Co., was awarded the concession in 1903. They were the only tenderers; the government could either accept or refuse it.

The operator would offer additional connectivity with the Grand Harbour through the granting of a second concession to construct a lift from the Marina to the Upper Barrakka Gardens. Subsequently a big board was erected outside the Customs House reading: ‘Barracca Lifts The Quickest Way to the City’.

By awarding the concession the government scored the first of two own goals. The tramway was given a monopoly of electric traction; no other tramway or light railway could use electric traction within half a mile of its route without its consent. This effectively denied the railway the opportunity to convert to electric traction. The tramway drew electromotive power from its own coal fired power station adjacent to the depot at Jetties Wharf, Marsa. 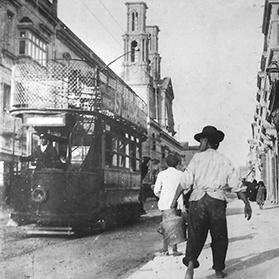 A government own goal: trams were allowed to run in parallel with the railway up to Birkirkara.

The second own goal came the following year when the tramway was allowed to extend its service up to Birkirkara Railway Station. The secondary concession was signed by General Kelly, the Officer Administering the Government, during the absence from the island of the Governor, Sir Charles Mansfield Clarke, and the Lieutenant Governor, Sir Edward Merewether.

It was to be a long-drawn-out battle. Both transport companies reduced fares to win over passengers, effectively killing any hope of the railway ever turning a profit.

During the first years of the new century, the Maltese economy flourished as a result of increased military spending, mainly on new breakwaters and graving docks. Such a phenomenon was cyclical and, true to form, was followed by a recession.

Under government ownership, some £44,715 had been spent, including £700 for the old rolling stock. Of this sum, £20,000 was spent prior to the reopening, an equal sum for the Mtarfa extension and the remainder on rolling stock and repairs.

The railway paid interest on capital to the government: 2¾ per cent on £29,700 and three per cent on £15,000. After 1906 the government waived further interest payments as a result of the tramway competition and the economic depression. The railway continued to pay working expenses without government aid and hoped to balance revenue and expenditure for 1910-11. 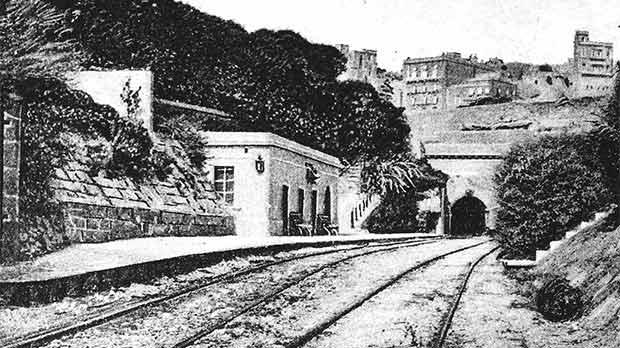 The decline was attributed to: “attractive amusements, like cinematographs, opera house, and be­cause people, instead of going to Notabile by train, remain in town. So I [Nicola Buhagiar, the manager who took over from L. Gatt after the government takeover] consider that everything has been against the railway. When we have any festivals in the country, or we have to convey the mili­tary, long trains are put on, which would be heavy trains, consisting of 13, 15 and 16 carriages”.

The tramway did not follow up its proposal to take over the railway if allowed to extend to Sliema and Pembroke. By the time Gerald Strickland returned to Malta in 1917, the railway was in dire straits; there was no money for repairs and renewals, and the rolling stock was worse for the wear.

The tramway was not faring any better; there were rumours that it was going to suspend operations. Strickland, bold as ever, suggested selling the obsolete steam locos to the French for service on the Western Front, seize the opportunity to nationalise the tramway and convert urban transport to electrical operation.

In 1920, J.H.Rider, consulting engineer with Preece, Cardew and Rider, drew up a report on the conversion of the railway to electric traction and the purchase of engines and trailer coaches for an estimated £55,800. The exercise was contingent on the nationalisation of the tramway.

Malta was awarded self-government the following year and the railway now fell under the direct responsibility of Maltese elected deputies. They all agreed that the railway was a poisoned chalice, a damned inheritance, but no political party dared to bell the cat and risk losing votes.

Whenever the railway budget came under debate, it was “la solita nota dolente” – the usual sorry story. Strickland admitted it was convenient for him to step out of his home at Villa Bologna and board the train, but the public good deserved consideration.

In 1927, Strickland became Head of Ministry, as the prime minister was then called. Ever the pragmatist, he saw that the future of transport lay in motor cars and buses, and it was useless, expensive and unfair to the public to keep the railway running, perennially, at a loss.

That same year the railway was offered for sale by tender. The two tenders received were considered derisory. Strickland then tabled a motion in the House to convert the line into a speedway for automobiles. 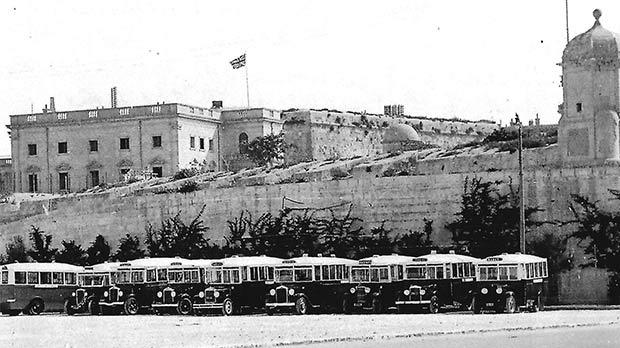 Motor buses hastened the demise of the loss-making railway.

In the following year the government tabled yet another motion offering to lease the railway for 20 years; if no acceptable tenders were received the line would be suspended on August 1, 1929.

Strickland rebutted Opposition criticism on the impending closure of the railway by reminding members of the House that the future of transport lay in motor buses, and the £8,000 annual deficit being run by the railway could be better used on education and roads. The agony of the railway was prolonged thanks to the closure of its arch enemy, the tramway, on December 16, 1929, leaving 200 tramway employees without a job.

In June 1930, the island was thrown into political turmoil and the constitution was suspended. Strickland, who was elevated to the peerage in 1928, was retained in a consultative capacity as Head of Ministry.

Meanwhile, the fledgling bus service was running, literally, out of control, and government stepped in by setting up the appropriately named Traffic Control Board. The best organised and equipped company was the British Motor Co., a subsidiary of Overseas Motor Co (OMC). 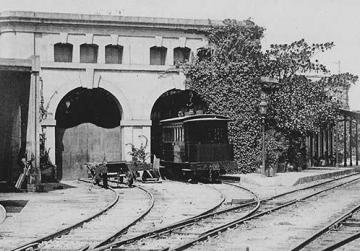 The Railway Workshop at Ħamrun Station. The station platform is at right.

The parent company offered to take over the railway if granted a monopoly of transport on the island. For the politicians, this was even worse than having the tramway men on the streets. There were hundreds of individual bus owners and their families; taking away their livelihood would be tantamount to political suicide. In the event, OMC decided not to continue its business on the island; the assets of BMC, its local subsidiary, were disposed of locally.

The route from Valletta to Museum Station was but a small, albeit important part of the reorganisation of the local transport network. With a tentative date for the implementation of nationwide bus routes set for April 1, 1931, the railway was wound down with a much reduced service by a handful of serviceable engines.

Finally, on March 16, 1931, Notice No. 98 in the Malta Government Gazette decreed that: “His Excellency the Governor has been pleased to direct that the Malta Railway shall close down at the end of the present financial year, namely on the 31st instant. The railway has for some time past been running at an increasing financial loss owing to the use of other and more convenient means of transport by the public. His Excellency trusts that the organised motor bus services will be able to meet the demands of the travelling public. Those railway employees who will not be given employment in other government departments will be retired on pension or gratuity.”

In the meantime the Treasury Department was working on the disposal and/or eventual utilisation of the railway assets, principally consisting of rolling stock, rails and properties. There were 10 engines and 23 carriages. What a pity that there was no enlightened politician at the time who saw beyond the value of a few hundred pounds worth of iron and steel scrap and failed to preserve at least one engine and one carriage for posterity to be displayed in static mode as one finds in countless European cities. 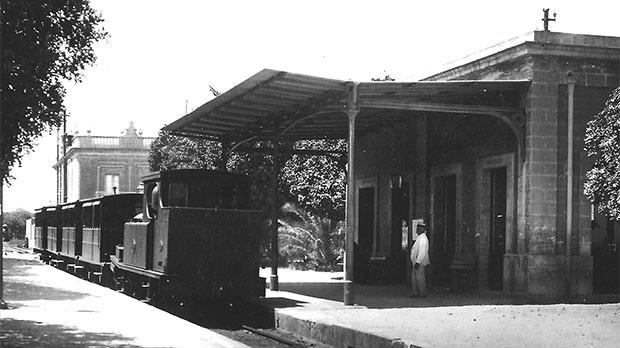 The railway was a poisoned chalice, a damned inheritance, but no political party dared to bell the cat and risk losing votes

Sadly, we only have the stations to remind us of the railway, no engine or rolling stock (save for a dilapidated carriage) to remind our children of the railway heritage. In Malta, much attention is deser­vedly given to architectural and military heritage but the preservation of industrial artefacts has been noticeably lacking, then as now.

In the 1960s, before urban sprawl obliterated its last vestiges, the railway became a mecca for British trainspotters who wrote about the remains and lamented: One regrets that the railway did not pay, and that nemesis in the shape of motor buses overcame it, and that no Maltese crystal-gazer in later years foresaw the tourist and promoted a scheme for presenting a companion to the English Bluebell Line (F.M.Judd, A Forgotten Railway, The Sunday Times of Malta, December 10, 1972).

As usual, hindsight is a great teacher. Even without the tramway and subsequent competition from motor buses, losses were inevitable; the trains were underutilised during off-peak hours and were uneconomic during rush hours due to the low fares charged. 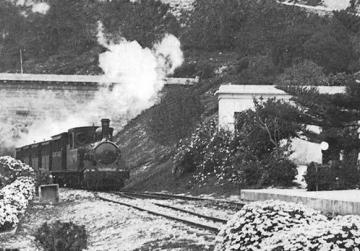 To railway buffs, a 7½-mile steam railway running on steep gradients was laughable. It has been described as: “a first-class example of a railway being employed for the wrong purpose in the wrong place, and in any case being wrongly equipped for the task it was supposed to perform”.

Unfortunately, the government takeover preceded massive developments in electric traction by a mere decade. One likes to think that, with electrification, the story would have been different and the tramway would not have made such a convincing case for running in parallel with the railway.

Epitaph of the railway

On March 31, 1931, the Malta Chronicle and Imperial Services Gazette published the following epitaph for the railway:

The passing of the Malta Railway

“Today many people are making a last pilgrimage to Notabile; the day upon which the railway ceases to be. Tomorrow the platforms will be deserted; no longer will the comic little trains ply to and fro the line; the Malta Railway will have passed into limbo. But not yet shall we forget our railway. Soon we shall be pointing out the stations to newcomers and saying pridefully: ‘Oh, yes, we had quite a decent little railway. Closed down a few months ago. What a pity! But of course it didn’t pay; couldn’t with all this bus traffic’.

“We shall generously forget the railway’s shortcomings and remember only its merits. We shall look back indulgently upon its fussy meanderings along the few miles of its length and forget all the minor discomforts attached to the journey.

“Numbers of recent arrivals who have not yet made a trip on the railway are doing so today. One party is starting just before lunch from Valletta, halting at San Antonio for lunch and an hour in the garden among the flowers, thence to Notabile and back by the last – the very last train. A whole day dedicated to the passing of the Malta Railway.

“It is safe also to assume that many residents of the old city will regret the passing of the railway which has served them faithfully for many years, and has maintained faith: that has made a trip to the city an enjoyable if slow excursion and not, as to-morrow will make imperative, a hair-raising and perilous descent.”

Michael Cassar co-authored several books with the late Joseph Bonnici until 2009. He continues to publish books with a social, maritime and transport theme. Past subjects have included the Malta Drydocks, the Malta Buses, HMS Hibernia, Royal Navy tugs and Malta Tugs (in collaboration with Tug Malta). His latest book The Gozo-Malta Connection celebrates the 130th anniversary since the start of the first regular mail service between the islands and the 35th anniversary of Gozo Channel Line. For further information e-mail info@bdlbooks.com or mikscas@gmail.com.