From 1815 to 1864, the islands west and south of the Greek mainland, in­cluding Corfu, formed an independent State called the United States of the Ionian Islands, under the protectorate of the UK. The British brought Maltese people to work as stonemasons in Corfu – initially because they were skilled in working with Maltese stone that had been imported for the new British Lord High Commissioner’s residence, known as the Palace, and for other planned representative buildings. After the Italians, these Maltese became the second largest group of Catholics living in Corfu.

­The British Order of St Michael and St George had its seat at this palace. This order, nowadays ranked as the sixth highest of the UK, was specially founded to honour inhabitants of the Ionian Islands and of Malta who had earned merit in the service for Great Britain. It was only later opened to men from the Commonwealth.

The emigration of Maltese people to Corfu ended when the island was transferred to Greece in 1864. By the 20th century the Maltese were  socialised in the Greek language, but remained distinctive mainly because of their religion, their surnames (numerous of which can still be found to this day) as well as their British citizenship.

Corfu used to be a highly contested island. In the 19th century, Italy in particular sparked a cultural battle through its settlements and various educational, cultural and charitable activities. By the time of the Risorgimento there was a clearly felt drive towards the east.

Half a century later, Italian dictator Benito Mussolini sought to realise this militarily as from the first year of his reign. For several weeks in August-September 1923, Italian fascist troops occupied the island.

On the first day of the occupation they ordered foreigners, among them more than 2,000 predominantly Maltese-British citizens, to present themselves in their consulates immediately. Thus, Maltese Corfiots were treated differently than their fellow islanders; they were regarded as ‘inner foreigners’.

Since this incident, especially because Archbishop of Corfu Leonardo Brindisi had then welcomed the Italian military forces, the Catholics were generally considered as agents of Italy. Not all Catholics were Italians though. Until World War II, the Maltese formed the majority of the British citizens in Corfu. 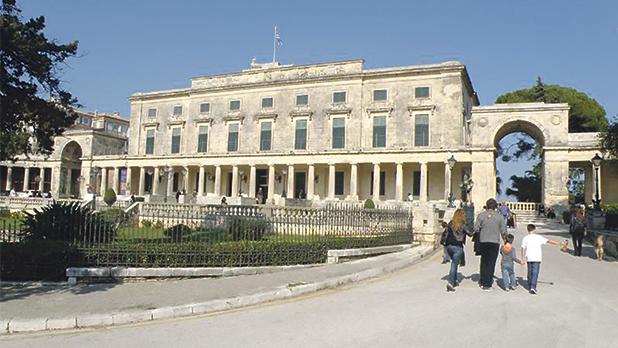 The former British Lord High Commissioner’s residence, also known as the Palace, in Corfu town, built by skilled Maltese stonemasons using stone imported from Malta. Several Maltese individuals are honoured for their merits at the Palace.

In October 1940, Italy tried to invade Greece from recently annexed Albania, and at the end of 1940, the Italians started to bomb Corfu again. In April 1941, they finally occupied the island. Rome dealt with the Ionian Islands and the Greek mainland separately: they created a particular poli­tical entity for the Ionian Islands, introducing a new currency and separate press agencies – the aim of which was to annex the islands to the Italian mother country.

After the ceasefire between Italy and the Western allies in September 1943, the Germans occupied Corfu after heavy bombardments.

In Greece, there was a variety of linguistic, ethnic and religious communities of which the Germans hardly had any knowledge. This is partly due to the fact that modern Greece – since its foundation (1821-1833) and well into the 21st century – was conceived as a mono-ethnical state: Following the extended population exchange of the Greek-Orthodox and the Muslim people between Greece and Turkey in the 1920s, it was undesirable to even mention the suspiciously viewed Slavic, Albanian and other minorities. 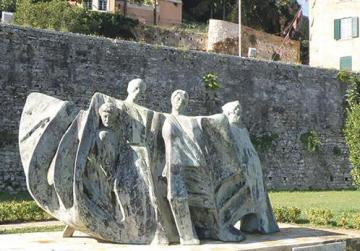 Thus, it is not surprising that, at first, the German military administration was not aware of the linguistically integrated Maltese in Corfu. If the Maltese had been the only Catholics on the island, the Germans might have spotted their distinctive surnames somewhat earlier.

But only few months later, beside the Jews, the Maltese, too, attracted the attention of the German occupiers, who, after heavy bombardments by the Western allies, felt irritated by the presence of British citizens in Corfu. In a letter from the German headquarters in Ioánnina, Greece, to Corfu, dated April 10, 1944, it was stated: “All English citizens who are still on the island are to be confined promptly, everywhere and on the spot, and to be deported here. All English citizens need to be seized.” 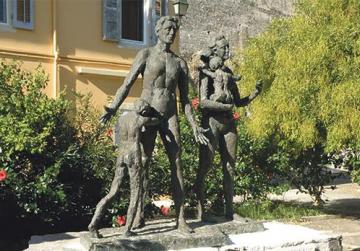 The Holocaust monument was erected in 2001 in Corfu town.

The occupiers needed a few months to find out that there were “nearly 1800 people with British citizenship” in Corfu – among them quite a few Greek-speaking Maltese.

The Germans were suspicious about the fact that the Maltese had inherited the British citizenship from their ancestors – something that had been normally an advantage rather than a disadvantage for them.

On April 14, 1944, the Corfu military intelligence branch of the infamous 104th Jägerdivision (hunter division) reported to the superior corps group in Ioánnina that there were “around 562 Maltese” in Corfu.

This usually well-informed unit did not know much about the presence of the Maltese, so it asked “for guidance how to treat the Maltese and whether confinement is an option”.

One week later, on April 20, Corfu reported more in detail to Ioánnina, referring to only one source – “the former English Consul Papadaki Perikles still resident in Corfu”.

The letter stated: “Apart from few exceptions, these people [with British citizenship] belong, in terms of their national traditions, mainly to the Maltese and to the Greek people. Only a minor part is in command of the English language. […] The vast majority of these British citizens were born in Corfu and inherited their British citizenship from their parents or grandparents, who had been born in Malta […]. This part of the population is found everywhere on the island. All its members live on farming.”

An additional list of names included only a few British citizens who did not have any connections with Malta.

While some Maltese authors claim that the Maltese in Corfu mainly lived in the city – and mostly in the quarters of Sarocco (San Rocco), near the Catholic graveyard and around Mandouki, during the war many city dwellers fled to the countryside in order to escape Italian, German, British and US bombs as well as to have better access to foodstuffs.

Afterward, Ioánnina was contacted not just from ‘below’ but also from ‘above’ – in this case by the Heeresgruppe E (Army Group E) of the high command of the Nazi German Wehrmacht. Apparently, by now, the German troops had found themselves in a somewhat difficult situation, for the letter dated April 21 received an entry stamp six days later, on April 27. A photo of the letter and its translation are featured here. 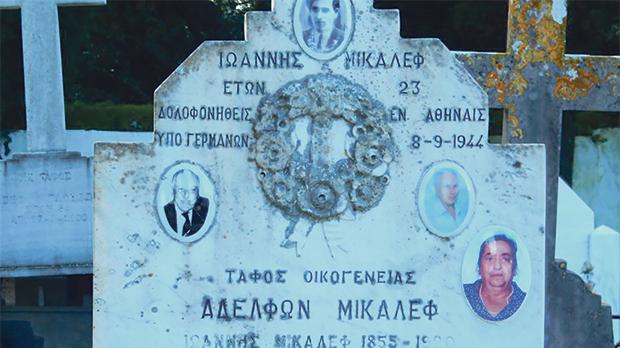 A grave in a Catholic cemetery in Corfu. The inscription reads: “Ioannis Mikalef, 23, murdered in Athens under the Germans”.

On April 27, the corps group in Ioánnina reported to the High Command (Army Group E) about the queries until then.

On May 2, Ioánnina finally passed on the following “suggestion” of Army Group E to the Commander of the island in Corfu – namely, to deport the integrated Maltese to labour camps into Germany: “Army Group E suggests to deport the Maltese fit for military service from Corfu to labour camps into the Reich and at the same time keep some influential Maltese as hostages in or­der to secure a reliable attitude to­wards the German occupation. Corps Group requests instant response.”

Luckily this “suggestion” could not be put into action. A few months later, the Germans had to leave the island in order not to be geographically separated from their headquarters.

The German SS and Wehrmacht proceeded to exterminate Corfu’s Jewish population. Jews had lived in the city for centuries; yet they were less assimilated than the Maltese. 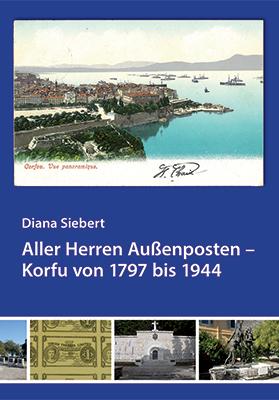 Most of the approximately 2,000 Jews were deported to Auschwitz. This was not an easy task due to a lack of ship capacity – and the German Navy even took into account that its fighting capacity would be thereby weakened.

Later the German occupiers were  busy securing their retreat in October 1944. The German army conducted the Shoah in Corfu at a time when other armies would rather have focus­ed on avoiding their own military doom. Instead of saving their skin, they regarded the systematic extermination of the Jews more important.

The difficult situation the German forces found themselves in might explain why the Maltese escaped this fate. Besides, the Germans in general treated the British better than the peoples of eastern Europe. Thus, the Maltese of Corfu got off lightly.

After the war the Italians were  harshly ushered out of Corfu. The Maltese remained. They form roughly two-thirds of the island’s Catholic popu­lation today. Sotirios Micallef was Corfu’s mayor from 2007 to 2010.

Diana Siebert is a historian at Siegen University, Germany, and wrote a book on Corfu’s history from 1797 to 1944. 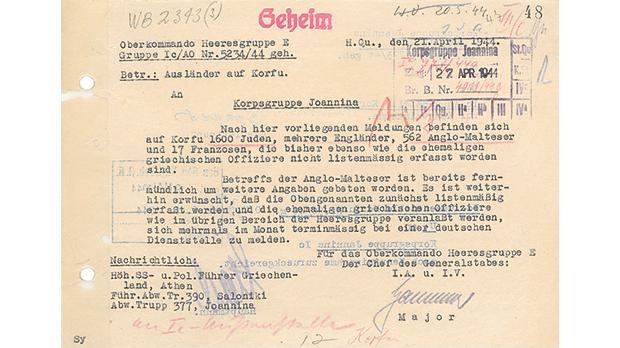 On April 21, 1944, the Heeresgruppe E (Army Group E) of the high command of the Nazi German Wehrmacht sent the following memo to the corps group in Ioánnina:

“Following reports at hand, there are 1,600 Jews, several English, 562 Anglo-Maltese and 17 French citizens in Corfu who, like the former Greek officers, have not yet been registered.

“Referring to the Anglo-Maltese, further details have already been requested via telephone. Furthermore, it is requested that the abovementioned get registered and that the former Greek officers should report by appointment several times monthly to the German office, the way it is carried out just like in the rest of the area under the control of the Army Group. 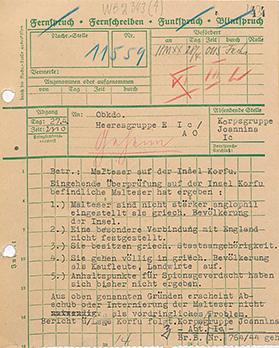 On April 27, the Ioánnina corps group sent the following reply to the High Command:

“Ref: The Maltese in Corfu.

Results of thorough examination of the Maltese in Corfu.

“1) The Maltese are not more Anglophile than the Greek population of the island.

“2) A special connection to England has not been detected.

“4) They are completely integrated into the Greek population – as merchants and farmers.

“5) Indications which confirm espionage suspicions have not been found so far.

“For the reasons stated above, confinement of the Maltese in Corfu or their deportation does not seem to have priority at this point.