Alex Vella traces the life and career of comic strip artist Harry Farrugia, who worked on some of the most popular comics between the 1940s and 1960s. 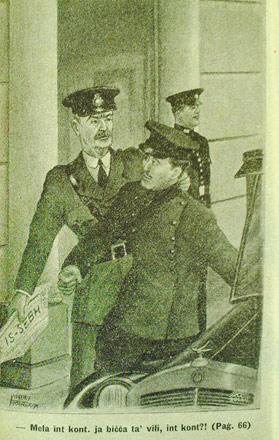 Farrugia, who started working in comics for the Amalgamated Press in the late 1940s, was quite a prolific artist.

However, his very first illustrations known to have appeared in print, were for the Maltese novels featuring the detective Bendu Muscat, written by Ivo Muscat Azzopardi.

The first book, Triq id-Dejqa Nru 313, was printed in 1938 in Alexandria, Egypt. A later edition of this book was published in 1960 by Empire Press.

The second novel, with the title Min Iduq Ilmet in-Nil, appeared in 1947, printed by Giovanni Muscat. This featured the same illustrations as the first novel.

The Bendu Muscat novels were later to gain great popularity in Malta, when transmitted by Rediffusion.

Farrugia left Egypt for the UK in 1946, aged 27. The rest of the family moved to Australia a few years later, and it was here that he seems to have first worked for D. C. Thomson, in 1961, drawing the true-life war strips for Victor and then moving on to strip stories with The Purple Trumpet. He kept up a prolific output right up to the time of his death.

Farrugia worked in pen, brush and ink, sometimes after making pencil sketches,and is not known to have ever worked in colour. He was self-taught and consulted many military books for details of uniforms, arms and equipment.

Marine subjects were his favourite and his specialty. This was, no doubt, due to his having grown up in Port Said at the mouth of the Suez Canal.

He was obsessed with his work on comics and worked for long hours, often falling asleep on his drawings.

The illustrator took his briefs from scripts forwarded to him by the publishers, which specified the images, wording, and bubbles which were to appear in each box. He produced double-sized originals, which he would deliver personally to the publishers in London once a week in large folders, which would later be reduced photographically for printing. He is only known to have worked on comics in the UK, and on a purely freelance basis.

His facial expressions were notable for their intensity, using an economy of pen strokes

Farrugia’s style was unmistakably his own; his characters were very well drawn and full of character. His facial expressions were notable for their intensity, using an economy of pen strokes.

He spared no efforts in his drawings to portray, as accurately as possible, the uniforms and costumes of the periods he was portraying. The backgrounds were also very meticulously done and Farrugia was especially good at portraying action sequences, achieving quite dramatic effects.

I first got to know about Farrugia when I visited www.victorhornetcomics.co.uk and was quite surprised to find the Maltese flag among those featured on the homepage at the time.

I eagerly read on to find out that one of my favourite artists was, as it turned out, of Maltese origin. The discovery spurred me to get in touch with the webmaster, Adrian Banfield, who informed me that he was aware of Farrugia’s Maltese origins and that he would welcome more information about the aritst. However, research yielded nothing new.

Banfield persisted in his searches through British records and finally, among other things, found his arrival entry record in Britain by ship from Port Said, Egypt, in 1946, as well as newspaper reports on his fatal traffic accident in 1970.

In these reports, a Wilfred P. Diacono from London was mentioned as his sole UK relative – although, when I tried to contact him, I discovered that he had passed away. I did manage to get in touch with Arthur Tabone, a cousin who provided much of the information we have on Farrugia in his early years and on his life in the UK, as well as a photo.

We found that Tabone had lived with Farrugia for about nine months, in Chiswick, and that during this time he helped him on his work for the War Picture Library. In 2012, Banfield and mysef were contacted by a nephew of Farrugia’s, Craig Farrugia, who was also able to confirm the signatures on the Bendu Muscat illustrations.

This feature was made possible with the help of Adrian Banfield, Mikiel Galea and Ġużi Gatt.