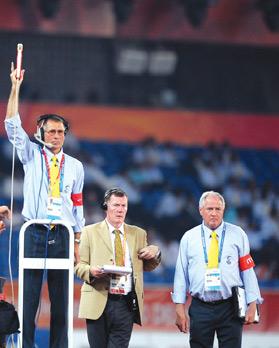 Alan Bell, widely regarded as the best race starter in the world, will deliver two courses in Malta next month.

There are moments during an athletics meet when the crowd falls silent and all their attention is focused on the half dozen or so athletes waiting to start a race.

During that moment, even though no one is looking at him, the most important person in the stadium is the one standing next to the athletes; it is the official (or starter) who is calling out the orders for the race to begin.

Alan Bell is one of these officials. When injury cut short his promising career as a high jumper, his local club asked him to help out in officiating at a youth event.

“‘I don’t know what I have to do’, I told the club secretary who had given me a gun to start a race,” he recalls with a laugh.

“To which the club secretary replied: ‘don’t worry, they won’t know if you get it wrong either!’”

That modest meet instilled in him a passion for officiating that saw him slowly move from local to international events through regional and national championships. The highlight came two years ago when Bell was named chief starter at the London Olympic Games.

“First of all it was an immense privilege,” he affirms.

“It was a huge responsibility to be chief starter, of course, but you can’t put into words the satisfaction.

I like to say that I’m not famous and I don’t want to be famous, but when I speak the world listens- Alan Bell

“There were 80,000 people for every session which was fantastic.

“I’d say it was the experience of a lifetime, probably the greatest in my career.”

Bell also admits that the size of the meet at which he’s officiating does make a difference, but only in the way that he psyches himself up for the event.

“When you perform in a big meet in front of many people then concentration is greater because you have to work a bit more to detach yourself,” he explains.

“I’m quite a sociable person so I’m always talking but in those bigger events I walk away from everybody for two minutes to really focus.

“Concentration is the key. In smaller events there might not be the same pressure but you always have to put in the focus and concentration.

“If you start to worry about how many people are watching then you can’t perform well.

“I like to say that I’m not famous and I don’t want to be famous, but when I speak the world listens.”

It certainly listened in 2011 when Bell disqualified Usain Bolt after the Jamaican star had false started in the final of the 100m at the World Athletics Championships in Daegu.

“There are two things that you have to keep in mind,” he points out.

“The first one is that you immediately realise that there was a false start and announce it. Only then do you see which athlete it was.

“You see something and then identify the lane with the athlete who is to be penalised. In my case, it was very obvious that it was Bolt but you have to be certain.

“It is not something I enjoyed or am proud of. The situation on the track was easy; the difficult part came afterwards as the media went crazy.

“That was not good for me but it was hellish for the seven guys who were thinking that they were now in with a shot to become world champion.”

Bolt’s elimination came after a change in the rules where anyone setting off before the starter’s orders is immediately disqualified (previously, athletes were allowed one error).

While admitting that the rule changes have helped athletics improve as a televised sport, Bell does not have views for or against them.

“It is fair to say that a good official doesn’t have an opinion on the rules. In my role as a starter the athletes have to understand the rules especially the young ones,” he says.

What he will admit is that “it has made my job easier. Statistically there are fewer false starts than there have ever been.

“One of the things that has happened is that the gamesmanship has been removed, and personal discipline has improved at all levels. You can see that now the concentration is immense.”

Athletes certainly seem aware of the implication of a slip-up but, even so, Bell likes to explain his actions.

“I don’t talk before a race but quite often, if there is an incident at the start, I will explain why I made a decision,” Bell adds.

“In truth, I talk a lot more with junior athletes. We have a responsibility to guide athletes when they are maturing. Coaches are more interested in technique but part of their preparation should include an explanation of the rules because if they understand they will be in a position to observe them.”

Bell will be in Malta to talk about those rules on October 25 and 26.

“On the first day, we’ll be running the UK Athletics Level 1 which is essentially for the beginner – for the person who might have an interest in athletics,” he explains.

“We’ll take them through the rules in a practical manner so that at the end of the day they should have a good understanding of the basis of the official rules of athletics.

“Hopefully it will strengthen the base of the pyramid and for one or two it might be the start of something more serious.

“On the second day, for a group who may want specific instruction we’ll be running a UK Athletics Level 2 Starters’ course.

“That will be aimed specifically at starters and starters’ assistants.

“It will be a smaller group but my wish is that on the first day we will have 30 to 40 people in the hope that it will interest a number of them to go further.”

Application forms can be downloaded from the Athletics Malta website, www.athleticsmalta.com.