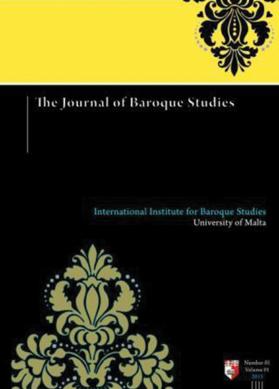 The publication contains contributions that discuss some of the most topical manifestations of the Baroque Age in Malta, Europe and beyond.

The first paper, authored by Elizabeth Tingle from the University of Plymouth, explores the development of the cult of St Vincent Ferrer in Brittany, culminating in its 17th-century revival.

Tingle places the renewed interest in this Catalan saint, who had preached extensively in Brittany and was buried in Vannes Cathedral, within the context of a wider post-Tridentine revitalisation of devotion to saints.

Ferrer’s doctrinally orthodox life and his role as witness to the faith being consonant with the saintly virtues, promoted by the counter-reformation, gave his cult overwhelming predominance on local saints, who conformed less to the baroque model of sainthood.

Most interestingly, Tingle links the resurgence of interest in Ferrer with Brittany’s quest to assert and maintain its privileges in France, to which it had only been formally united in 1532.

The work that follows is an analysis of the terms ‘counter-reformation’ and ‘baroque’. Patrick Preston from the University of Chichester endeavours to elucidate whether the former as a style owes its genesis to the latter. Preston first discusses three different understandings of the counter-reformation, as postulated by Henry Outram Evennett, Hubert Jedin and Massimo Firpo. In so doing, he places particular emphasis on links with the Council of Trent, the Holy Inquisition, the Jesuits and related historical events, such as the Peace of Westphalia.

While noting that the views of these scholars may not be brought together, Preston moves to discuss the relationship between art and post-Tridentine religion and politics.

His conclusion, namely that the convergence of baroque and the counter-reformation was coincidental, may help shed more light on understanding the shift from the restraint and severity advocated by the Council of Trent to the exuberance of the baroque style.

In contrast to the analytical nature of Preston’s contribution, Paola Vismara from the University of Milan approaches her subject matter, namely miracles in missionary lands occurring predominantly during the 17th century, from the perspective of historical anthropology.

Written in French, her paper describes a series of supernatural interventions across India, Asia, Indochina and South America. Thus, we learn of the Mogol monkey which venerated the name of Christ written on a piece of paper; of the inexplicable lights appearing in the sky following the martyrdom of a number of children in Nagasaki; of incorruptible corpses, resurrections and numerous miraculous healings, all testimony to God’s omnipotence.

Despite the parallel presence of the diabolic, briefly touched upon by Vismara, it appears that in the eyes of the missionaries, the miracle within the miracle was the frequent conversion of those who had witnessed it, if not of the actual beneficiary.

On a different note, Professor Denis De Lucca from the University of Malta discusses the eminent contribution of the Jesuits to the teaching of mathematics in Italy in the 17th and 18th centuries. Initially, the subject of academic ridicule in view of its alleged links with alchemy and astrology, the Jesuits elevated the status of the subject among students, intellectuals and the nobility through various publications and, most notably, through the engagement of renowned scholars with a special interest in the field at their college in Rome.

The civil and military applications of the subject struck a chord with the nobility of the Romans, who felt ever more threatened by new military devices such as cannon and the introduction of the bastion. This possibly accounts for the widespread success enjoyed by Jesuit-run seminaries for nobles instituted in the region.

The sacred was also the catalyst of the secular in the baroque age, since religious institutions, most notably the Jesuits, were prime educators

Welcoming thousands of students from all over Italy and beyond, the Jesuits imparted instructions to the crème de la crème of society also on mathematical disciplines, which included geometry, arithmetic, optics, statics, hydrostatics, nautical science, astronomy, logic, chronology, military architecture and war machines.

The publication’s penultimate paper by the University of Virginia’s Anne Jacobson Schutte elucidates a theme that surely warrants further exploration by historians.

In a world where travelling was precarious and, at times, prohibitive, a number of guide books were published mostly throughout the 17th and 18th centuries to make spiritual, if not physical, pilgrimages possible.

A small number of them dealt with such journeys to Loreto, where, tradition holds, the house of the Virgin Mary was transported by angels. The paper tackles known publications that were marginally or fully concerned with this type of voyage.

Some of them take the form of a quarantena, that is, a 40-day prayer exercise conducted in parallel with events in the life of Mary and Jesus, beginning with the Immaculate Conception and ending with the Assumption.

The most interesting and exhaustive is undoubtedly the work of Giovanni Bellarino, who addresses the reader as “my son” and who proposes a good number of spiritual exercises, considerations and advice (including calculating the mileage to Loreto from the point of departure) to accompany a pilgrim’s soul to the Holy House.

The contribution made by Franco Bruni of the École Française de Rome is the only one in the publication that deals with Malta.

Written in Italian, it provides an overture, as it were, to the musical treasures housed at the Mdina Cathedral archives and is a definite must-read for Melitensia afficionados.

From his studies of surviving musical manuscripts and printed works dating from the foundation of the Cathedral’s cappella in the 1620s, it appears that the collection is mostly made up of music from Rome, Venice, Bologna, Naples and Sicily (mainly Palermo).

Setting aside the previously preferred Gregorian style, it contains polychoral pieces, musica concertata for small and large ensembles, scores for a solo voice with basso continuo and pieces composed for the a cappella style.

Including the works of composers like Claudio Monteverdi, Francesco Foggia, Giovanni Battista Vitali and Isabella Leonarda – whose sounds still reach us through the centuries – the collection is evidence in itself of Malta’s profuse cultural connections with major cities of the Baroque Age. This is substantiated by the remarkable mobility of musicians and maestri di cappella in the 17th century, some of whom went on to take positions in Sicily and beyond.

In conclusion, the papers contained in this volume all highlight, in one way or another, the pervasive influence of religion on all aspects of life during time, and provide an acute insight into what is often referred to as Baroque Catholicism.

Set against the background of the counter-reformation, Baroque Catholicism was characterised by an exuberant practice of piety that included the propagation of saints’ cults, proselytising missions and pilgrimages to holy places, together with exuberant ritual, accompanied by sophisticated musical arrangements, religious festivals and civic processions.

Yet, the sacred was also the catalyst of the secular in the Baroque Age, since religious institutions, most notably the Jesuits, were prime educators, promoting learning and the arts in all their forms.

It is these multifaceted aspects of religion and life at the time that the different contributors to this publication have examined in their respective works, hence providing a clear looking glass onto an age characterised by its ephemeral magnificence.