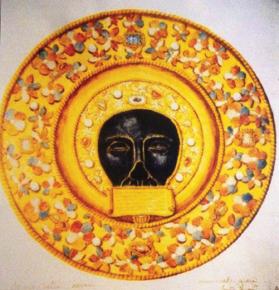 The solid gold basin encrusted with gems, containing part of the skull of St John the Baptist, stolen by Fra Vincenzo Pesaro in 1580.

Eddie Attard’s article on thefts from churches in Malta (November 23, 2014) is an important overview of the subject from 1663 onwards.

I had dedicated some research to ‘thefts with sacrilege’ in the 16th century, reaching the conclusion that these were anything but a rare occurrence. According to my findings, professed members of the Order of Malta figured high in the list of culprits.

The frequent recurrence of thefts by knights – from churches and from varied other places, has to be seen in context. It links closely with the family status of knights and with the moral set-up of the Order.

The majority of knights were not rich: they generally came from the cadet ranks of noble wealthy families, who concentrated all their riches on the first-born (the system of primogeniture) and often left the younger sons to fend for themselves. Many saw the Order of Malta as an opportunity of gainful employment and financial security for young men of the aristocratic classes. But, before they rose in its ranks, their income would be very meagre, unless supplemented by handouts from home.

The ‘poorer’ knights lived surrounded by the opulence of the richer ones, oppressed by peer pressure of being unable to keep up with the competition, and by the imperative that they had to maintain the highest social standards, which many could ill afford. Most strove to rise diligently in the hierarchy and in the favour of the Grand Master, each promotion translating into a better source of income.

The minority, compelled to keep up with the Joneses, resorted to criminal expedients, like robbery, counterfeiting currency, underhand commerce, dubious corsairing or illegal piracy. Of course, some entered the Order with a pre-existing criminal streak, as evidenced by the fact that many knights convicted of thefts already had an important police record in other misdemeanours to show.

The vow of poverty taken by all knights on joining the Order had over time acquired a hollow meaning coated in sophistry. In practice it had come to mean that nothing belonged to the individual knight, that he held his wealth in trust from the Order, and that, on his death, all his earthly goods reverted to the Order. But, while they were alive, knights could still revel in the most opulent extravagance – if they could afford it.

A theft from a church in 1556 created a major scandal and turned into an ideal cautionary tale. Fra Stamati Condo, a chaplain of the Order of Greek parentage, succumbed to the temptation of stealing jewels which adorned the icon most venerated by the knights, Our Lady of Philermos.

Reliable sources state that when Condo took the gems, “his arm withered and went rigid, whereupon he remained crippled for life”. Struck by paralysis and remorse, the penitent Condo owned up to the robbery and returned the jewels. Being a priest, he was severely reprimanded and exiled from Malta as punishment. The Philermos Madonna had already suffered a previous theft in 1537.

The savage severity of the penalties reflected the priorities of the ancien régime, based on the sanctity of private property and the pre-eminence of religion. Thefts from churches violated both these fundamental precepts

This story, rather well documented, is pregnant with inverse symbolism: we have a ‘negative’ miracle, one in which divine intervention serves to punish and maim rather than to heal or reward. It is the vengeful God of the Old Testament, rather than the God of Love of the New.

Justice and retribution were instantaneous, the good Lord apparently not subscribing to the teaching that revenge had best be served cold.

Grand Master Claude de la Sengle proved himself more merciful than the outraged heavens, but Condo’s crippled arm was put to good use and served as a didactic tool for many years after the theft.

The year before the Great Siege saw two sacrilegious robberies by knights of Malta. In May, Fra Filippo Stagno from Messina and the no-good British troublemaker Sir John James Sandilands, broke into the small church of St Anthony in Vittoriosa at night and stole every item of gold and silver they could lay their hands on. They arranged for the precious metals to be melted down, roping in the silversmith Laurencio Ros from Rhodes. 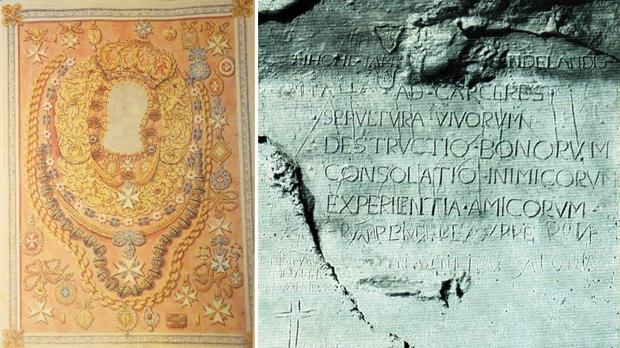 The dress of Our Lady of Philermos, from which Fra Stamati Condo stole jewels in 1556. Right: The desperate graffito incised in the underground guva of Fort St Angelo by Sir John James Sandilands, executed in 1564 for theft from a church.

The knights were eventually caught, expelled from the Order and handed over to the local criminal tribunal for trial. The court ordered that they be strangled in prison and their bodies disposed of in weighted sacks in the middle of Grand Harbour.

Sandiland’s body seems to have been left in a ditch, to be eaten by dogs. The judges spared Ros, but he lived the rest of his life in abject poverty, soliciting handouts.

The savage severity of these penalties reflected the priorities of the ancien régime, based on the sanctity of private property and the pre-eminence of religion. Thefts from churches violated both these fundamental precepts, and the combination of these two abominations in one act, attracted punishments rarely heard of in relation to other crimes. Sacrilege features towards the very top in the pyramid of the gravity of sin.

This exemplary fate of Stagno and Sandilands hardly served as a deterrent. Only two months later, the Council found Fra Pedro Loubbes (Lopez?) guilty of having stolen the silver cruets from the chapel of the Virgin Mary in the church of St Lawrence in Vittoriosa.

Loubbes, a serial burglar, had been convicted of many thefts of precious objects from auberges. The Council publicly expelled him from the Order.

In 1568, another major theft from the tholo, the strongroom/ chapel in which the precious reliquaries of the Order were kept, was never solved, despite the dire instructions to submit all suspects to torture in order to obtain information.

Another ‘church’ theft hit the headlines in 1580, when one of the most valuable relics of the Order went missing. It housed part of the skull of St John, embedded in a solid gold basin encrusted with precious stones.

Suspicion fell on the Italian knight Fra Vincenzo Pesaro. When the authorities searched his lodgings, they found the reliquary, but the delinquent had already broken it up. Expertly restored, it was placed on display for the veneration of the faithful, only to be taken again, this time irreversibly, by Napoleon Bonaparte in 1798. Pesaro was executed, Bonaparte exalted.

These were all thefts committed by knights. But there are others recorded. In July 1596, for example, a robber broke into the church of Porto Salvo in Valletta and stole the pyx and the container of the cruets for holy oils. He eventually repented, confessed his theft and returned the precious objects.

A legal problem arose as to whether evidence obtained in confession could be used in court. To the present day, the absolute confidentiality of the confessional has always been respected by the Maltese courts, though the legal basis of this protection is rather elusive in the codes of law.

An in-depth and detailed study on robberies committed by the knights of St John in the cinquecento can be found in my Histories of Malta, Vol. VIII, pp. 9 – 26.