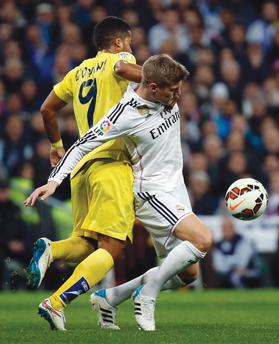 Toni Kroos (right) is in his first season at Real Madrid.

With Real Madrid’s attack losing its potency and the team faltering in crunch games, the tide has started to turn surprisingly rapidly against coach Carlo Ancelotti.

Such is the level of expectation at the Bernabeu that winning a coveted 10th European Cup last season and overseeing their Spanish record 22-match winning streak before Christmas, has done little to bolster the Italian’s position.

They are two points clear at the top of La Liga and well placed to progress to the Champions League quarter-finals with a 2-0 win at Schalke 04 in their last 16 first leg but they are not playing with the same gusto as earlier in the campaign.

Fans and the Madrid media alike have been harsh in their criticism of the side and that puts extra significance on the Clasico against second-placed Barcelona later this month.

During Real’s 22-match winning run they averaged more than three goals a game but now have 24 from the last 13 matches.

Cristiano Ronaldo has been unable to sustain the sensational form with which he began the season and has a modest seven goals in 2015, while Karim Benzema has five and Gareth Bale three. Their combined total is the same as Lionel Messi’s at Barcelona.

Real’s poor return from league matches with their direct rivals has also been highlighted and the board led by president Florentino Perez are said to feel that while Ancelotti is on good terms with the players he lacks authority when necessary.

He lost a lot of credit due to the manner of Real’s 4-0 hammering by local rivals Atletico Madrid last month.

The team again failed to rise to the occasion last weekend when they drew 1-1 at home to a Villarreal side that had rested players ahead of their King’s Cup semi-final with Barcelona.

A failure to rotate the squad sufficiently has also been blamed for players, and in particular Toni Kroos, looking weary.

Kroos, in his first season since moving from Bayern Munich, has been taken aback by the scale of expectation at the club.

“We were in Dubai recently and that’s the kind of place where you think you’re going a long way away. However, once we got there I had the feeling that the people were even crazier than they are in Spain,” he said.

“That says it all, I suppose.

“The club has won an unbelievable number of trophies and still has a top quality team with top-class players. I think that alone is what makes Real Madrid so interesting.”

If Real president Florentino Perez did wield the axe, with rumours he may be paving the way for youth team coach Zinedine Zidane to take over, there would be no shortage of suitors for Ancelotti, with Manchester City likely to head the queue.