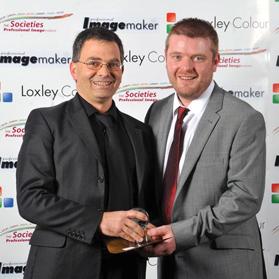 Times of Malta photojournalist Darrin Zammit Lupi won a prestigious award from the UK’s largest photographic organisation with an image of a migrant staring at the camera as he was whisked away in a bus.

Mr Zammit Lupi won the Media Photographer of the Year trophy in The Societies’ annual international convention, to which a group of eight Maltese photographers were invited through the Malta Institute of Professional Photography.

The presentation was held at an awards dinner at the London Metropole Hilton earlier this month.

Praised by the judges as “a very strong storytelling image that engages the viewer”, the young immigrant staring intently at the camera lens is captured by the camera with his right hand gripping the seat of a bus.

Mr Zammit Lupi took the photo after a group of immigrants arrived in Malta last year and were being escorted to the detention centres. “The young man was just another of the hundreds of asylum seekers I’ve photographed arriving in Malta over the years, sometimes disembarking from the boat that rescued them when their rickety vessels ran into trouble while crossing the Mediterranean or sitting on a bus while waiting to be driven away to police headquarters for processing,” Mr Zammit Lupi said.

All that changed with the migrant’s look. His gaze “straight at me, was piercing and haunting, tearing through my camera lens and into my mind’s eye, burrowing itself deeper into the innermost recesses of my psyche”.

Mr Zammit Lupi eventually tracked him down and Mohammed Ilmi Adam, 17, from Mogadishu, told Times of Malta he had fled Somalia to find his parents who, he believed, escaped to Europe when he was a child.

He had no recollection of Mr Zammit Lupi shooting his picture when he arrived but “was glad I did as he thought his parents or someone he knew would recognise him,” the photographer noted. The group of photographers – MIPP president Kevin Casha, Ramon Sammut, Sergio Muscat, Mr Zammit Lupi, Domenic Aquilina, Hilary Spiteri and Alan Carville – were invited to the convention to give master and super classes while being involved in the overall judging of the international final print competition.

The winner of the 2013 SWPP/MIPP photographic competition, Robert Mifsud, was invited to attend the convention.