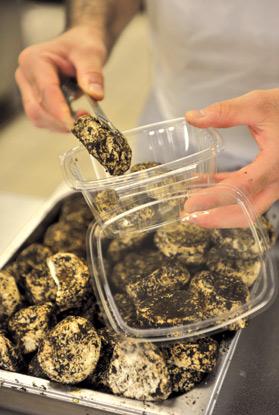 Traceability for agricultural products is mandatory under EU regulations.

Some prefer it soft, others like it hard. Some favour plain while others enjoy it flavoured. Either way it is hard to find someone who does not like the traditional Maltese cheeselet.

Peppered or plain, soft or dried, the ġbejna may be on its way to being acknowledged as a unique delicacy and territorial speciality, officially referred to by the EU as Protected Designation of Origin, through the help of an EU funded project called t-Cheesimal.

Produced from sheep’s milk, the ġbejna was always an important part of the Maltese diet but now is considered to be a treat also highly sought after by foreigners.

In order to valorise the cheeselet, a project under the Italia-Malta Programme 2007-2013 – t-Cheesimal – was created. The partners are University of Malta under the direction of lecturer Everaldo Attard, Consorzio Ricerca Filiera Lattiera Casearia (CoRFiLaC, Ragusa) under Stefania Carpino, and University of Catania with Professor Giuseppe Licitra.

The project studies the production of the ġbejna from the very beginning, including the identification of the animals’ feed – whether it is freshly cut grass or concentrates.

Good hygienic practices have to be followed, starting from the farm

The sheep play a fundamental role in the chain of production and appropriate housing conditions and good quality feed are essential in ensuring a good final product.

Usually a family-run business, with everyone pitching in, the shepherd and sons rear the sheep, starting off early in the morning and finishing late at night, while the wives and daughters are dedicated to the production of ġbejniet.

The consumer is the final member of the chain and, while being aware of health benefits derived from agricultural products, they are also conscious of food safety.

Good hygienic practices have to be followed, starting from the farm where the ġbejna is produced to the way it is kept and stored at home by the consumer.

Therefore, even when, at the farm level, the necessary precautions are taken for the safe production of the cheeselet, contamination may result during handling by the consumer.

Dr Attard said the project, which is expected to come to a close in September, also involved a marketing survey with 1,500 questionnaires. These were distributed to consumers of ġbejniet to analyse their views and expectations of the quality of the local cheese when compared to foreign products.

A set of designed boxes was shown to consumers to choose the most appealing package, and places such as supermarkets and restaurants were also studied to see how they present ġbejniet.

The data collection and analysis of the questionnaires was ongoing and it was too early to indicate any results, Dr Attard said.

Although shepherds usually have direct clients, the consumer does not always know the provenance of ġbejniet. The issue of traceability for agricultural products is today mandatory under EU regulations and the project also aims at improving this.