The table and chart compare the results of the travel survey carried out in March, with the three National Household Travel Surveys (NHTS) carried out since 1989 by the Maltese authorities.

The sustained increase in car use and dependency is very evident in the results. This is further exacerbated by the 10.1 per cent of car users being passengers (8.4 per cent of all respondents), which is significantly lower than previous years. It is also the lowest in all the surveys, meaning that there are more cars being used on the road.

Bus usage has increased from 32 million passenger trips in 2011 to 48 million in 2017. This increase, however, was not a result in a modal shift from private to public car use, as the choice of buses has reduced slightly from 11.3 per cent to 10.8 per cent. It is important to state that the survey reflects the travel behaviour of Maltese residents and therefore does not take into consideration the significant increase of foreign residents living and working in Malta, and the increase in tourism numbers, all of which typically contribute towards increased use of alternative modes of transport.

It is encouraging that 45.2 per cent of respondents who did not use their car actually had access to a car

Trips done on foot have also reduced significantly from 7.6 per cent in 2010 to 1.2 per cent in 2018, while trips done by minibus/coach reduced from 3.7 per cent to 1.2. This may reflect the smaller sample size of the survey, but is definitely indicative of travel choices in Malta.

Motorbike use on the other hand increased slightly from 1.1 per cent to 1.6, which follows the increase in motorcycle registrations and driving licences in recent years.

Project manager Nicoletta Moss explained that it is likely that the Maltese authorities will carry out another National Household Travel Survey in 2020 to keep the approximate 10-year gap between each survey.

“Given the significant changes in travel patterns, mobility and the economic situation in Malta in recent years, we felt the need for a more immediate understanding of people’s travel patterns, which is why we carried out this survey.

It is encouraging that 45.2 per cent of respondents who did not use their car actually had access to a car. This means that they chose an alternative mode of transport. This is also a risk because they can very easily switch back to using their car which would worsen the situation in Malta.”

The survey was coordinated by Prof. Maria Attard, head of geography and director of the Institute for Climate Change and Sustainable Development at the University of Malta, and collaborator within Project Aegle.

“We embarked on this initiative to take stock of the situation and current travel patterns. We also hope to raise awareness with the public to better understand the current situation and inform public debate,” Prof. Attard said.  The survey took place between March 1 and 6. It was carried out over the phone to random households selected from local electoral and telephone registers.

There were 250 valid respondents who answered a number of questions related to theirlast trip. This included the origin and destination, mode of transport, purpose of the trip and duration.

Project Aegle is a foundation set up by many of Malta’s leading experts to help lay out the problem and inform the public about the causes for traffic congestion and parking problems, its symptoms and possible solutions.

The foundation is actively working on new solutions to improve mobility through the greater utilisation of vehicles, public transport and an intelligent approach to work and travel. Project Aegle is also a platform where people are encouraged to share their ideas, collaborate and receive support in implementing solutions to the mobility problem. 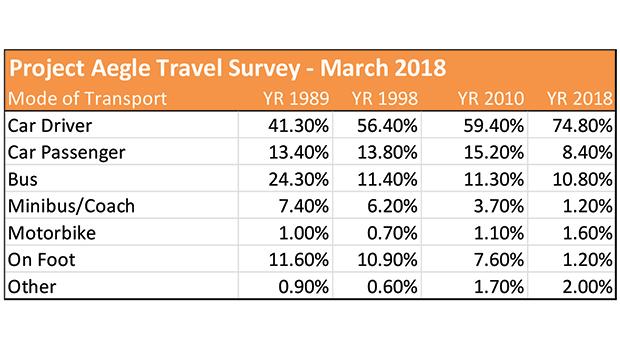