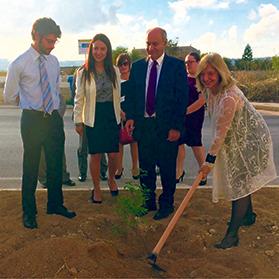 This ceremony was organised by the French embassy in Malta, Żebbuġ council and environment NGO Flimkien ghal Ambjent Ahjar.

A reception followed in the garden of the French Ambassador’s residence in Żebbuġ.

The French Ambassador said she is thrilled, as a resident of Żebbuġ, to contribute to the commitment taken by the local council to plant 30,000 trees over the next years.