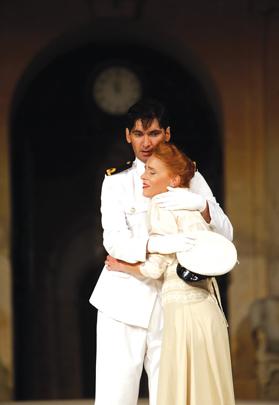 Malcolm Galea and Faye Paris provided charming central protagonists in Much Ado About Nothing.

It is a ploy used often enough in film and theatre scripts to have two people, who do not seem to like each other very much, fall in love over the course of their disinterested but undeniably charged banter, and make a solid match by the end of the piece. What is not as common is for what was initially conceived as a subplot to become the better enjoyed plotline by audiences in general, because of the quick wit and endearingly comedic value.

MADC’s production Much Ado About Nothing, held in the balmy grounds at San Anton Gardens, managed to strike a good balance between the main plot and the subplot and made the most of Shakespeare’s simple but effective deceptive devices for furthering the action.

Set against a backdrop of post-World War II Europe, and the joy and relief that VE Day celebrations brought with them, this production was rich in period costume and music, complete with crackly vinyl sounds, cut-glass Vera Lynn-type recordings and Rediffusion broadcasts.

The retro feel of the late 1940s fitted the characters not only in styling but also matched the tone, mores and content of the piece itself – another mark of the adaptability of Shakespearean scripts.

Leonato, played by a solid and earnest Colin Willis, and his wife Imogen, portrayed by Polly March, gladly consent to the marriage of their only daughter Hero (Nicola Abela Garrett) to André Agius’s Claudio – a part he played with youthful earnestness.

It is interesting to note the seamless change in sex and character that director Chris Gatt chose to make with Imogen, who does not feature in the original script, and whose lines are attributed to Antonio, brother of Leonato. I found this adjustment to be quite cleverly devised and gave March the chance to give her character strength and subtlety, despite the smallness of the role.

She and Willis complemented each other well, while Abela Garrett’s nuanced performance came across as a dutiful daughter whose affront at her character defamation was heartfelt and genuine, reflecting that of her entire household.

For indeed, Hero is mistakenly accused of being unfaithful to Claudio due to Don John’s machinations by deliberately causing his brother, Don Pedro and Claudio to see someone dressed like her and called by her name, with another man.

Despite its positive outcome in the play’s resolution, the darkness of the main plot is evident

It is typical of many of Shakespeare’s plots to involve mistaken identity and character switches or taking on false identities. Trickery is a great vehicle for drawing in the audience and the Bard’s masterly use of it, coupled with his inimitable verse, allows the audience to be drawn in and placed in the know, while the characters themselves are largely unaware of what powers are manipulating them, until the eventual dénouement at the end.

Stefan Cachia Zammit made an affable and easygoing leader of Don Pedro, much liked by his clique and equally disliked by his brother, Michael Mangion’s Don John. Mangion made for a superbly quiet villain: cold, calculating and surreptitiously manoeuvring the situation to his advantage by paying Luke Mercieca’s Boracchio to carry out the deception which left Don Pedro and Claudio determined to humiliate Hero at the altar.

In the same way, they proved true friends in Claudio’s initial attempt to woo Hero by having Don Pedro do it for him – so were they tricked into believing her infidelity when Mercieca’s devious Boracchio locked himself in embrace with Steffi Thake’s love-struck and oblivious Margaret during a drunken night of revellery.

Thus the idea of a travesty leads to much ado about nothing – for a lie supplanted the truth and when all was comically revealed by Erin Stuart Palmier’s Dogberry and Joe Depasquale’s Verges, all ends well. But the notion of trickery begins with one positive trick (to bring Hero and Claudio together) which transforms into a negative trick (to drive a wedge in family, love and friendship by Don John’s machinations), begetting a cruel trick, where Claudio abandons Hero at the altar. This in turn engenders a clever trick by Leonato’s household into mollifying Claudio and Don Pedro and reminding the former of his true love for Hero, by having her appear to have died of grief.

The farcical character duo constructed by Stuart Palmier and Depasquale went down very well with the audience and I must say was incredibly well executed deliberately in Maltese accents, playing on their differences in height and size and the characters’ sense of self-importance. Dogberry, in particular, confirms Palmier’s strength as a great character actor, from his dealings with Luke Saidon’s Conrade and Mercieca’s Boracchio, at their drunken arrest to their trial before Rambert Attard’s irate magistrate.

The subplot referred to earlier is, of course, the Beatrice-Benedick relationship. They complete Shakespeare’s Much Ado by striking out as one of the earliest romantic-comedy couples in the manner in which it is best understood by contemporary audiences.

Despite its positive outcome in the play’s resolution, the darkness of the main plot is evident and, were it not for the intermingling of the Beatrice-Benedick plot with two likeable, headstrong characters, aided by the more in-your-face humour brought by Dogberry, the play would be much less palatable. This is because its rather far-fetched plot is only legitimised by the levity brought to the stage in the guise of Beatrice, played by Faye Paris in great form – and with the charm that only a true redhead can bring to the stage – and Malcolm Galea’s ever-loveable nice-guy characterisation; their on-stage chemistry was evident to all.

The scene where their friends collude to trick them into believing that they have feelings for each other was very well-executed thanks to Abela Garrett, Thake and Maxine Aquilina’s Ursula, who ply Beatrice with possibilities while hanging out the washing (with dire consequences for the poor sheets) and to Cachia Zammit, Agius and Luke Farrugia’s Balthasar, who lead Galea’s Benedick on a merry dance around the estate grounds till he falls foul of the garden furniture.

Farrugia displayed the mark of a good Elizabethan player for his ditty on the ukulele and his effortless doubling of minor characters.

Much Ado About Nothing made for a very good night out.