Recent research has highlighted two examples of court dress in Leandro Preziosi’s photo-portraiture – the first results from the important discovery of a photograph in the Swedish National Archives and the second from a study of Ottoman court dress. 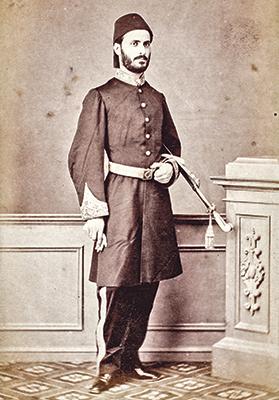 Court dress is the formal attire that dignitaries would wear to attend the court of their monarch. If they were diplomats or consuls accredited to a foreign court, they would generally be required to wear their own national court dress at a foreign court. This custom originated many centuries ago and persisted until the middle of the 20th century.

Court dress was therefore a symbol of both status and nationality. Status was easily legible by the amount of gold or silver braid embroidered on to the base garment; this was generally stitched on cuffs, collars, pocket flaps and for the higher ranks on the chest also. The braid was normally gold or silver wire worked delicately in the form of national symbols. For example, British court dress featured oak leaves and palm fronds; Japanese court dress depicted the lotus leaf and flower; while Nordic countries favoured pine cones and needles as well as oak leaves.

Recent investigations in the Swedish National Archives have unearthed a rare photograph of Olof Fredrik Gollcher (1829-1889) taken by Preziosi (top right). Gollcher served as consul or vice consul for a number of countries (The Netherlands, Sweden and Norway), so the challenge presented by this photograph was to determine approximately when it was taken and which country’s uniform he is wearing.

Examination of the props (curtain, chair and carpet) in the photo indicate that the photograph was taken in Preziosi’s studio in Malta and the details printed on the back of the photo confirm this was at 28, Strada Federico in Valletta.

One might expect that Gollcher, being Swedish, would have assumed the position of consul for that country before and for longer than any other country; however, this was not the case.

Gollcher arrived in Malta in 1848 on the wooden Swedish schooner Svalan II (the Swallow). He soon established himself as one of the principal players in the maritime industry based in Malta. His knowledge of, and proficiency in, a number of languages gave him an added advantage in representing Dutch, Swedish and Norwegian interests in Malta. He first acted as vice consul for the Netherlands from 1858 to 1860, then as consul from 1861 to 1889. He represented Sweden and Norway (the two kingdoms were united under a common monarch from 1814 to 1905) from 1869 until his death in 1889.

A comparison of the decorative embroidery of Gollcher’s uniform with that of other European countries indicates that he is wearing the costume of an officer in the foreign service of The Netherlands. 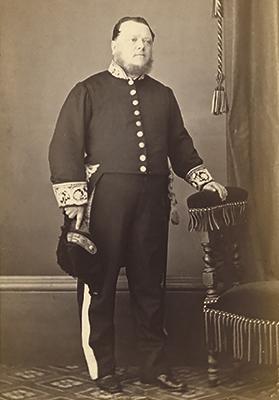 The scrolls on the cuffs bear a close resemblance to those on the uniforms of a consul-general of the Netherlands (see Preziosi’s photo). The task of deciphering these uniforms is made all the more difficult when one notices the different interpretations of the standard pattern by different tailors.  The image above shows differences in the 1842 pattern. The coat on the far right dates from 1908; note the cuff pattern.

If one considers the overlap between Preziosi’s active years (1849-1869) and Gollcher’s consular appointments, then it is most likely he is wearing a Dutch uniform. True, there is a one-year overlap between Gollcher’s Swedish/Norwegian appointment and Preziosi’s death; however, it is unlikely that the photograph was taken in 1869. This conclusion is supported by the fact that Dutch and Swedish experts in court dress have confirmed that this uniform bears a close resemblance to Dutch uniforms of the time.

Other examples of court dress in Preziosi’s oeuvre arise in two of his self-portraits, which show him standing in his studio wearing a smart uniform with embroidered cuffs and collar (see photo on left). Many have assumed that he is wearing military uniform possibly because of the sword he holds. This assumption presents a conundrum since, to date, no evidence has surfaced to suggest that Preziosi had enlisted in or was attached to the Ottoman army. If the military connection arises out of the presence of the sword then it is worth pointing out that swords were an essential component of court dress. It is more likely that Preziosi is wearing Ottoman court dress or the ceremonial uniform of a junior rank. 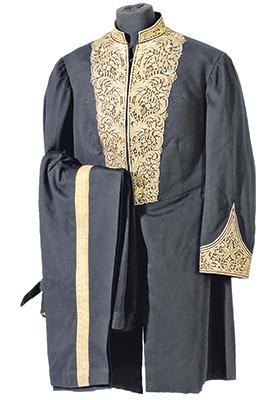 Information kindly provided by Lale Gorunur, curator of the Sadberk Hanim Museum in Istanbul, indicates that Preziosi is wearing a style of ceremonial uniform worn by civilians or military officers who have won favour from the Ottoman court as a result of having performed a worthy act or service.

The photograph of a 19th-century Ottoman diplomatic or court uniform shows the cuff embroidery in detail (right). Comparison with Preziosi’s portrait shows not just the similar outline but the same cinquefoil leaf pattern at the centre of the embroidered cuff. The uniform with embroidered panels to the chest must be that of a high-ranking official.

While the origin of the ceremonial Ottoman uniform may differ from that of European court dress, the two share the same significance in being granted by the court, and demonstrate achievement and elevated status in society. In fact, the Ottoman sultan habitually wore a similarly-styled uniform although, of course, his was extensively embroidered.

Exactly why Preziosi was recognised in this manner is not certain. Was it because of his photographic achievements in Turkey, was it through his brother’s (Count Amadeo Preziosi) connections in Istanbul or was he simply just dressing up in a costume that was at hand? Thus uncertainty still lurks behind Preziosi’s self-portraits, however, we may be one step closer to solving the question of his uniform.

Cecilia Lindhé, University of Gothenburg, is currently writing a book about the Gollcher family history.  The authors acknowledge the advice of Rens Wiegeraad, Lale Gorunur and Gustaf Fryksén.

Christopher Grech will be giving a public lecture entitled ‘Consular Uniforms of the Gollcher Family’ at Palazzo Falson, Mdina, on October 25 at 6.30pm.