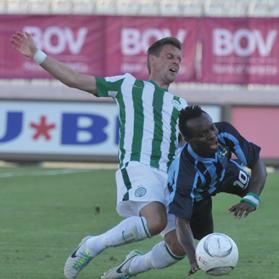 Ferencvaros were the hardest hit by the UEFA measures as the once-mighty club were slapped with a fine of €20,000 and the partial closure of their stadium following monkey chants and racist banners displayed in both legs in Malta and Hungary, earlier this month.

This week, the Hungarian club were reported as showing interest in signing Wanderers striker Stanley Ohawuchi. Ironically, the Nigerian was the target of abuse by the Ferencvaros supporters who also travelled to Malta in numbers for the first leg at the National Stadium which finished one-all.

Ferencvaros, who reached the second qualifying round after beating Sliema 2-1 at home for a 3-2 aggregate, were beaten by Rijeka 1-0 in the same competition on Thursday.

UEFA’s sanction will come into effect in next week’s second leg against the Croatia team.

This is not the first time that Ferencvaros were disciplined for unruly behaviour by their supporters during a UEFA competition match.

Almost ten years ago, they were fined €30,000 but spared further punishment following a series of unsavoury incidents during a UEFA Cup first-round match against Millwall who are also known for violence-related incidents in England.

On that occasion, the Hungarians won the second leg 3-1 to advance 4-2 on aggregate, but it was a contest blighted by unruly scenes inside the stadium, with Millwall’s black players being subjected to racist abuse from the home fans.

Before the game, two Millwall fans were also hospitalised with stab wounds.

Racism in sport has been rampant in eastern Europe for several years now and the problem blighting the game also made the news in Diosgyori’s 2-1 win over Birkirkara on July 3.

The home team was reported by the UEFA delegate for racist terrace chants by the Hungary club’s fans in particular those at sectors B5 to 7 inside the DVTK Stadium.

As a consequence, the Diosgyori ground will be partially closed for next week’s second leg against Litex Lovech.

Diosgyori, who ousted the Stripes 6-2 on aggregate, are still favourites to reach the third qualifying round after beating Litex Lovech 2-0 in Bulgaria on Thursday.

Yesterday, UEFA also ordered that sections of the Spartak Trnava stadium will be closed for the home team’s next match (vs Zestafoni of Georgia) after abusive chants by the home fans in the first qualifying round, second leg against Hibernians on July 10.

Spartak made it through in convincing fashion after a 5-0 win over the Maltese team for a 9-2 aggregate score. However, their fans marred their team’s progress with their unruly behaviour from the stands.

Next Thursday, Alan Mario Sant will be in charge of the Europa League second qualifying round (second leg) between NK Siroki Brijeg and FK Mlada Boleslav at the Pecara Stadium, in Bosnia.

The first match ended in a 2-1 win for Czech side Mlada Boleslav.

The MFA appointed Alan Camilleri and Roberto Vella as assistant referees for Sant and the fourth official will be Chris Lautier.