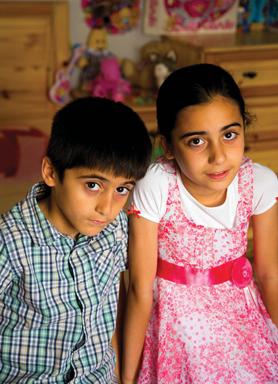 Nine-year-old Stera and her six-year-old brother, Mohammed, were born stateless on the island to Syrian Kurdish parents. They have become the poster children for the UNHCR’s report on statelessness in Malta. Photo: Darrin Zammit Lupi

Imagine not having access to education, legal employment, health and other benefits, not being able to open a bank account... being unable to marry. Imagine being non-existent, as far as your legal status goes.

That is the fate of tens of asylum seekers currently in Malta and as many as 10 million individuals the world over.

They are stateless, unrecognised by any country and as such have no papers to prove when they were born, or their provenance.

Their plight was first recognised officially in a 1954 UN convention, but 60 years on there are no signs of the problem abating, which has led the UN refugee agency to use its anniversary today to launch a global campaign to end statelessness within 10 years.

Locally, the UNHCR is calling upon the Maltese government to sign up to the international legislation and implement a system that recognises individuals who are stateless.

Besides the 1954 agreement, there is a second UN convention of 1961 that regulates statelessness. The laws aim to prevent people being rendered stateless in the first place but also provide a legal framework guiding countries that host people without citizenship on how to protect them.

Having no nationality often means having no future

Malta, along with Estonia, Poland and Cyprus within the EU, is not party to either convention despite a 2012 pledge by member states to be signed up. Although in 2003 the government signed a 1997 Council of Europe convention dealing with the problem, Parliament is yet to ratify the legislation.

The UNHCR report also calls on the government to consider establishing a process with which to identify stateless people who arrive in Malta and raise awareness among the government institutions dealing with migrants.

The agency does not identify how many stateless people there are in Malta but they are not believed to number more than a few dozen at the most.

However, the UNHCR representative to Malta, Jon Hoisaeter, stressed that every affected individual faces fund-amental problems.

“Stateless people do not have access to many of the basic rights that most of us take for granted  having no nationality often means having no future. But it is a problem that we can solve,” he argued.

Two of Malta’s stateless children are nine-year-old Stera and her six-year-old brother, Mohammed, who have become the poster children for the UN’s campaign in Malta.

They were born and raised in Malta to Syrian Kurdish parents. They speak Maltese fluently and are, for all intents and purposes, locals. However, they are in limbo, unable to live a normal life in Malta and unable to return to Syria, or be deported for that matter.

Their father, 41-year-old Quis, is one of many hundreds of thousands of Kurdish people stripped of citizenship by the Syrian regime during the 1960s and 1970s.

His wife Nessrin is also Kurdish but is a regular citizen, however, under Syrian law she cannot confer her citizenship to her spouse or her children born abroad.

Speaking to The Sunday Times of Malta in June, Quis had said his family’s status is a huge cause of anxiety.

“You cannot imagine what a big problem it is to be in our situation. This affects everything in our lives, and when we go asking for help, everyone keeps saying there is nothing they can do.”

The UNHCR report collects the testimonies of others in their situation, like Kadija*, who was born in the middle of the war between Eritrea and Ethiopia in the 1980s.

Her parents are Eritrean but her birth was never registered. Her father disappeared when she was a teenager and that sealed her fate as her mother’s birth had also not been registered. She tried to obtain papers over the years but the authorities always rejected her.

In Malta she feels safe but also excluded by all migrant communities to which she would have normally been linked because of her ambivalent identity. Moreover, her life is premised on this basic uncertainty, no real prospect of functioning normally within Maltese society, confirming her nationality of origin or being granted Maltese nationality.