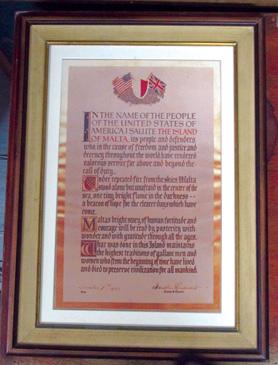 A copy of the illuminated scroll presented by the US President to the “people and defenders of Malta”, expressing the American people’s admiration for Malta’s contribution to democracy, which is at the National War Museum. The scroll was dated December 7, 1943, to mark the second anniversary of the US’s entry into World War II. The original scroll is held at the National Library, Valletta.

The third important visit by a wartime leader in Malta in 1943 was by US President Franklin D. Roosevelt, who arrived in Malta on December 8. His Douglas C 54 aircraft, escorted by 20 Lightning P-38s and Supermarine Spitfires, landed at Luqa airfield at 9.30am.

He was met by the island’s leading civil and service dignitaries, as well as by a number of American personalities, including General Dwight D. Eisenhower, General Carl Andrew Spaatz, General Walter Bedell Smith and Rear-Admiral Wilson Brown and Rear-Admiral Ross Macintire.

On leaving the aircraft, the President and Governor Lort Gort boarded the Willys Jeep ‘Husky’ presented in July by General Eisenhower to Sir Keith Park, and took the salute as the Royal Malta Artillery band played the American national anthem. After inspecting the guard of honour provided by the three services (Army, Air Force and Navy), President Roosevelt addressed the gathering.

With him he had a scroll, with a citation from the President speaking on behalf of the people of the US, about their admiration for Malta’s contribution to democracy. After he read it to the gathering, the President handed over the case containing the illuminated scroll to his son-in-law, Major John Boettiger, who presented it to Governor Lord Gort.

Following the Governor’s address of appreciation, Roosevelt, while on his way back to his aircraft, expressed a desire to visit the harbour area. He was transferred to the Governor’s car and toured Marsa, Paola, Żabbar, St Peter’s, Ricasoli, Kalkara, Vittoriosa, Senglea, Cospicua and the dockyard, after which he left Malta at 1pm.

Meanwhile, by early October 1943, the Allies were in control of southern Italy, and the Allied armies stood facing the Volturno Line, the first of a series of prepared defensive lines running across Italy from which the Germans chose to fight delaying actions, giving ground slowly and buying time to complete their preparation of the Winter Line, their strongest defensive line south of Rome.

On October 13, Italy declared war on Germany, and the Allies were joined by Italian fighting and support troops. Meanwhile, in the north, the Germans and Benito Mussolini organised Italian units to continue fighting the Allies.

During November, the US 5th Army struggled to make progress towards the Gustav Line, never quite making it to Monte Cassino or the Garigliano River. On the east side, the British 8th Army broke through the Trigno River line and advanced on the Germans’ new positions on the Sangro River.

British and New Zealand troops launched an assault on November 22, 1944, against the Sangro River line. By December 1, the German line was broken.

The US 5th Army finally reached the Garigliano River in December 1943, but was still short of Cassino and the Rapido River.

In the west, the Canadians took the town of Ortona after an epic 29-day struggle against the German Fallschirmjäger defending it.

Field Marshal Bernard Montgomery returned to Britain to prepare for the Normandy invasion and was replaced as 8th Army commander by General Oliver Leese. As winter settled in, further offensives became difficult.

Relevant artefacts and information may be viewed at Heritage Malta’s National War Museum in Valletta.

Charles Debono is curator of the National War Museum.