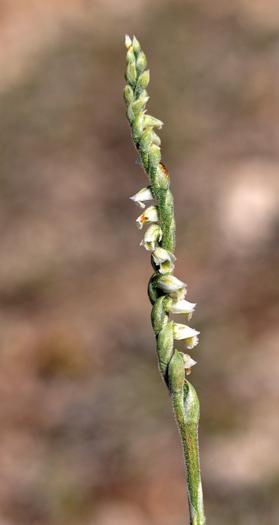 The autumn lady’s tresses is an uncommon orchid that flowers in September or October, a few weeks after the first heavy rains of the season. Its blooming coincides with the flowering of the autumn narcissus (narċis imwaħħar).

The orchid is indigenous in the Mediterranean region. Thousands of years ago it migrated north where it occupied close-cropped grasslands overlying chalk or limestone habitats. These habitats were created by early man by removing trees to provide suitable pasture land. It is now found in most of Europe (except in the north), and east, towards the Western Himalayas. The species is not common and is absent from many habitats.

The autumn’s lady’s tresses is known in Maltese as ħajja u mejta – a name given to many species of orchids. The name refers to the plant’s tubers which grow in pairs: while one tuber is large and full of nutrients, the other is small and shrivelled.

Its scientific name is Spiranthes spiralis, a combination of a Greek and a Latin word, both of which mean “spiral”. The inflorescence, in fact, consists of small flowers growing spirally on a small vertical stalk. You need to look very carefully to spot the flowers as the stalk is often very short – sometimes not more than five centimetres high. You would also need to go to the right place at the right time. In Malta, the autumn lady’s tresses is restricted to rocky arid habitats known as garigue. The best places to find it are in Buskett and Pembroke, but it is not common in these localities.

To make itself more elusive, the autumn lady’s tresses, like other species of orchids, does not flower every year as its flowering is determined by rainfall.