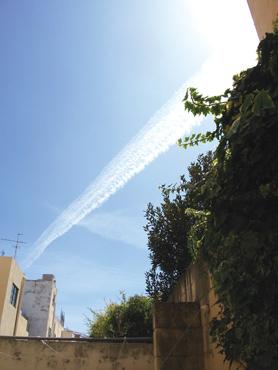 ‘Chemtrail’ over Malta? Or simply a condensation trail formed by aircraft exhaust when atmospheric humidity is high?

In a cloudless sky a trail hangs long after a passing plane has flown by. Sometimes a grid of white trails can be seen criss-crossing overhead.

These are contrails, simple trails of aircraft exhaust made visible by condensation. Smoking gun to conspiracy theorists, the contrails are billed as mysterious ‘chemtrails’. According to some websites they are supposedly engineered by evil governments whose sole aim is to spray its citizens with ‘poisonous chemicals’ or some other such nonsense.

Long subject to speculation, the subject was first raised in Malta by a foreign resident who wrote in to a local newspaper, reporting that he had seen a large four-engined jet, flying at 30,000 feet southeast over Marsascala “deploying a chemtrail”.

This concerned individual questioned whether foreign aircraft were permitted to behave in this way, insisting that “people have a right to know what chemicals are being discharged into their airspace”.

Most of the ‘chemtrail’ videos on the internet are actually footage of persistent contrails which linger in humid conditions. Yet some people have concluded they are part of a worldwide conspiracy involving spraying of obnoxious substances on the population at large. A sinister purpose lies behind the vapour trails, or so they believe.

Can we blame the conspiracy advocates for being sceptical and easily drawn in by runaway speculation given the US government’s history of secretly testing chemical or biological agents on an unsuspecting public?

This scandal was revealed back in 1977 when US Senate hearings led to a public outcry and a repeal of the law allowing secret tests to be carried out on both civilians and military personnel. Following protests, the US Department of Defence was forced to obtain confirmed consent before conducting such tests or experiments. The American public, particularly war veterans, never trusted their government again after this incident.

Subscribers to the chemtrails theory are convinced that the purpose of the claimed chemical release from aircraft may be for any number of reasons. Among those cited are psychological manipulation, human population control, weather modification, chemical/biological warfare and solar radiation management.

The conspiracy believers are worried that the trails could cause health problems and insist they can tell a chemtrail from a contrail from the longer amount of time it hangs in the air. However, as any aviator will tell you, this varies according to how much humidity is present in the atmosphere:

“Contrails are condensation from jet or piston engine exhaust. They are as dangerous as clouds. The only chemical in some jets is a product which keeps jet fuel from freezing. Avgas has no moisture in it and doesn’t freeze. There is no conspiracy, who would want to do this anyway?” asks a jet pilot.

Grid-shaped trails in the sky are nothing more than the effect of aircraft flying designated east-west and north-south routes – highways in the sky. Images of water-filled barrels on the inside of new aircraft intended to simulate passenger weight have been mistakenly identified as containing “an unknown chemical ready to be sprayed on the public” for reasons best known to the conspiracists.

Chemtrail fanatics are a mixed bunch. Strangely enough, a large number turn out to be climate change denialists, which makes the picture even more contorted when the latest chemtrail theory suggests they are intended for global adaptation in a changing climate.

Cloud seeding, a decades-old method of pumping substances from aircraft to encourage rainfall, is in fact on the rise as rainfall declines in some areas due to climate change. Texan farmers clubbing together pay less than four US cents an acre to buy some relief from drought for their crops.

Cloud seeding entails spraying small particles (aluminium oxide, barium, or silver iodide) onto clouds to influence their development and induce rainfall. It is regularly used in a number of drought-prone countries including the US, China, Russia and India.

Several rapid changes to Australia’s environmental legislation were made in 2004 to enable cloud seeding trials in a national park.

At the time, environmentalists voiced their concerns about the uptake of elemental silver in a highly sensitive environment affecting the pygmy possum among other species as well as high level algal blooms in once pristine glacial lakes.

In 2008, China was all set to shoot chemicals into the air to prevent it raining on the Olympic Games. Dependency on cloud seeding in dry regions in China is high, although the practice has also raised suspicions locally that the government is secretly ‘washing the air’ in polluted areas like Beijing.

Over the past 20 years, as the inevitability of climate change has become clearer, a discussion on altering clouds to make them more reflective to cool a warming earth, has been taking place.

The idea is that modifying cloud reflectivity in combination with reducing greenhouse gas emissions (and possibly other climate engineering techniques) will be sufficient to control global warming. However, like any planetary-scale project dealing with the complex global climate system, there is always the risk of unintended consequences.

The new science of geo-engineering has been defined as ‘design and development of technological interventions which can blunt the impact of climate change’. It is now clear that reduction of emissions in isolation is not going to be enough to solve the biggest problem in human history. Meanwhile, policymakers are already looking at how to plan relocation of communities as mass displacements and migrations are on the cards.

Simon Nicholson, co-founder of the Washington Geoengineering Consortium (WGC), observes that civil society groups have been wary of entering into discussions on hi-tech ways of adapting to climate change for fear it will blow them off course from the current focus on mitigation efforts (reducing greenhouse gases

“By the time civil society organisations started to pay attention to adaptation, the conversation was dominated by technocratic concerns about financing, technology transfer, and the like. Civil society actors have to catch up fast to ensure that the needs and concerns of the world’s vulnerable people and ecosystems are given adequate attention,” says Nicholson.

Discussing geo-engineering as a step beyond adaptation to climate change is important and the array of technologies to be considered is diverse. Environmentalists fear they are being forced into a future promoted by technology careerists.

Yet most people working on geo-engineering seem to be motivated by a deep desire to do something constructive in the face of humanity’s greatest collective challenge. It makes better sense to have an active voice in the geo-engineering conversation than to seek to suppress it outright.

Certainly countries like India may be more vulnerable to geo-engineering, risking massive damage to society and ecosystems. It is essential that the subject becomes a part of mainstream public discourse.

As an effort in this direction, the Council on Energy, Environment and Water and the University of Oxford’s Institute for Science, Innovation and Society organised a workshop on ‘Climate geo-engineering governance’ in New Delhi last month.

The chemtrails conspiracy pales into insignificance for anyone who cares to take a wider view of the world’s near future circumstances.