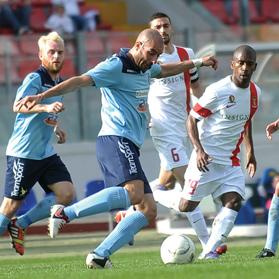 Andre Paus, the Valletta coach, couldn’t take his eyes off the trophy. Even Alfonso Greco, his Sliema Wanderers counterpart, also gazed at the silverware placed on the main table.

The FA Trophy will be up for grabs this evening when Valletta, the newly-crowned champions, take on Sliema Wanderers in the final at the National Stadium (kick-off 5pm).

Riding the crest of a wave, Valletta will be aiming to put further gloss on a successful season by completing a double for the first time since 2001.

Valletta start favourites to make a clean sweep of the major honours but they will be up against a Wanderers side hellbent on emulating their surprising win over the Citizens in the 2009 final, the last time the Blues captured a trophy.

Saturday’s titanic clash with Birkirkara and the scenes of unrestrained joy among the City fans after a 2-0 victory are still the main talking point but Paus is adamant his players will not rest on their laurels.

“In the end, we won the game and I’m very pleased. Seeing all those people celebrating was a great experience. I expect that the fans will also come to support the team in the cup final.

“As players and coaches, you do your best to take all the prizes that you can. When I’m old, I want to be able to tell my grandchildren that, in 2014, I won the Premier League and cup in Malta. It’s the same for the players.”

When it was put to Paus that Valletta look to have an edge over Sliema who finished a disappointing fifth in the league, the Dutchman replied: “Every game starts at 0-0. As a team, Sliema have a certain way of playing and we’re not underestimating them.

“We need to do our job. I’m confident but a game at this level can be influenced by many factors, like the refereeing, episodes and other things.”

Roderick Briffa, who scored Valletta’s second goal after coming on as a late substitute, is certain to be restored to the starting XI.

“We have many good players in our squad, so we can replace them (Borg and Nafti),” Paus said.

“Look at Roderick Briffa. I was very satisfied with his attitude in our last game.

“He’s a player who won’t let you down. As a professional, he wanted an explanation as to why he was not in the first team on Saturday. I told him my reasons and he understood.”

Sliema’s Greco needs no reminding that his team must overcome the champions to clinch the cup but he’s cautiously upbeat.

“We know that we are facing a superior squad that has a lot of quality but in football, the stronger team not always wins. We will certainly try our best to bring joy to the club and supporters of Sliema.”

Valletta’s stirring performance against Birkirkara has strengthened Greco’s conviction about the potential of City’s squad.

“They have got many individuals who can decide a game with their talent and experience,” Greco said.

“They showed this on Saturday as Valletta’s performance was the best all season.

“The final is a very important objective for Sliema Wanderers.

“We could have done better in the Championship Pool but there were situations that undermined the team. Now, we have an-other chance to end on a positive note.”

There is not a shade of doubt that Sliema lack the strength-in-depth that Valletta possess. In this context, the club’s decision to terminate the contract of playmaker Admir Vladavic before their final league match was somewhat surprising.

Bosnia international Vladavic failed to live up to expectations and was sent off twice since joining Sliema in January.

Questioned about Vladavic’s departure, Greco said: “There was an agreement with the club as Vladavic felt that he couldn’t give more to the team. We also expected more from him.”

While the Sliema supporters are probably delighted to see the back of Vladavic, not so can be said of veteran striker Ivan Woods who has already announced that today’s final will mark the end of his competitive career.

Sliema are indebted to Woods for being in with a chance of adding to their record of 20 Trophy triumphs as it was his goal that steered them past Qormi in the semis.

“Sliema should erect a monument to Ivan Woods,” Greco said.

“This season, there were many occasions when he was not in his best condition due to injuries but he always made himself available to help the team. He’s an example, a reference point to all players.”

Winger John Mintoff is out to serve suspension while Abubakar Bello-Osagie is still recovering from a knee operation.