Here’s a look at the strains of influenza which have had devastating effects on the global community, including Malta, in the last century.

A strain of influenza may turn into a pandemic when it spreads on a worldwide scale and infects a large proportion of the human population. The last 100 years have witnessed three major flu pandemics, which also hit Malta, and a number of epidemics, meaning they were restricted to a particular region.

The deadliest flu pandemic in the last century was the so-called Spanish flu which was caused by an unusually severe and deadly influenza A virus strain of sub-type H1N1. While old data showed that 40 to 50 million were killed by this flu, current estimates show that 50 to 100 million were in fact killed worldwide. This pandemic spread even to the Arctic and remote Pacific islands.

Symptoms were so severe that they were initially misdiagnosed as dengue, cholera or typhoid. The majority of deaths were from bacterial pneumonia, a secondary infection caused by influenza, but the virus also killed people by massive haemorrhages and oedema (an abnormal accumulation of liquid) in the lung.

An usual feature of this pandemic was that it killed mostly young, healthy adults, with 99 per cent of pandemic influenza deaths occurring in people under 65 and more than half in young adults aged between 20 to 40.

According to a paper by Charles Zammit Savona in an issue of the Malta Medical Journal released in 2005, the Spanish flu affected around 20,388 civilians and killed 807 in Malta.

Local health authorities took precautionary measures in an attempt to control the spread of infection, including the prevention of overcrowding in public places, disinfecting public places, reducing visiting times in the various charitable institutions, stopping the pawning of clothes and closing state schools. It increased visits to people’s homes by sanitary inspectors and temporary surveillance of people coming in from abroad.

The Asian flu was an outbreak of avian influenza and as its name suggests, originated in China from mutation in wild ducks combined with a pre-existing human strain. It spread to Singapore, Hong Kong and the US. Estimates of worldwide deaths vary widely, but range from one million to four million.

An unusual feature of this pandemic was that it killed mostly young, healthy adults

Malta was also significantly hit by the Asian flu pandemic, which was first seen here in August 1957, according to the paper by Charles-Savona. The epidemic peaked the following month. After a decline, a second wave started in November. A total of 8,783 cases were reported and 11 died of the infection.

Although the epidemic remained quiescent throughout 1958, when only 39 cases of influenza were reported, this was followed by resurgences of the infection in 1959 and 1961, when more than 5,500 people were affected.

This flu pandemic was caused by a strain of H3N2 descended from H2N2, in which genes from multiple subtypes reasserted to form a new virus. It killed an estimated one million people worldwide.

This pandemic primarily affected people born after 1950, because the older generation had protective immunity resulting from prior experience with H1N1 strains. 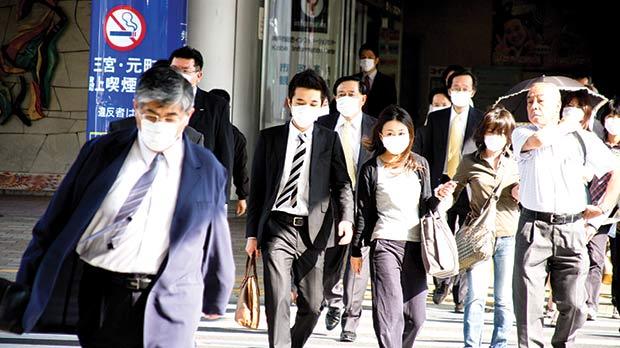 People wearing face masks during the swine flu outbreak in Kobe, Japan, on May 20, 2009. Photo: Hinochika/shutterstock.com

On June 11, 2009, an outbreak of influenza A/H1N1 virus, commonly referred to as swine flu was officially declared by the WHO as the first influenza pandemic of the 21st century. It is thought to be a mutation of four known strains of influenza A virus sub-type H1N1: one endemic in humans, one endemic in birds and two endemic in pigs (swine).

This new virus spread rapidly because of a lack of pre-existing antibody-mediated immunity in the human population. The pandemic was officially over in August 2010. Experts say that around 284,500 people were killed by the disease worldwide. 718 cases of swine flu were reported in Malta, with the first two men diagnosed after a holiday in Spain in June 2009.

In all, five people died in Malta of the disease, including two elderly people with chronic health problems, a 32-year-old woman from Spain and a 70-year-old British woman who was on holiday.

As part of the emergency response, the Health Department distributed a leaflet to all households, explaining elementary prevention measures to stop the spread of the disease.

Swine flu hit the headlines again this year as deaths were reported across eastern Europe and the Middle East. Northern Ireland is also reporting increasing cases.