Two stunning three-storey-high murals have been painted on the walls of abandoned, derelict buildings of the White Rocks Complex in Pembroke.

The detailed paintings cover the entire sides of two separate buildings, which face the sea and are hidden from the Coast Road.

One depicts the Monopoly man, made famous by the age-old board game, with his thick moustache and top hat, riding a cart driven by four oxen.

The second is the haunting image of a woman holding the world in her hands. Both are signed – the street name Twitch is written neatly next to the leg of an ox while ‘Clap 2014’ is hidden behind a clump of grass at the bottom of the woman painting.

Twitch is the signature of 35-year-old Maltese street artist James Micallef Grimaud, who started and finished the entire mural in the span of six days earlier this summer.

These were painted early last summer as part of a series of events which led up to the Sliema Arts Festival, which took place in July. The painting of the woman was done by Australian street artist known as Clap. His name is Mark Taylor. 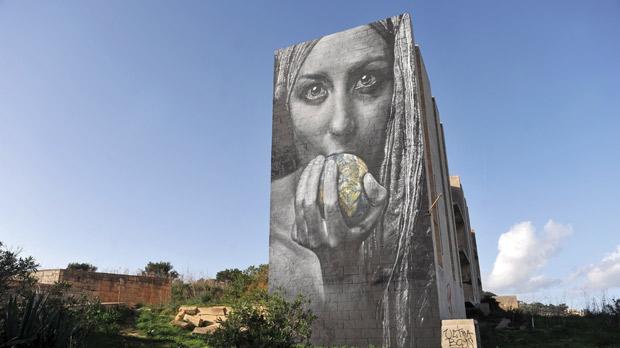 One of the stunning three-storey-high murals painted on the walls of abandoned, derelict buildings at the White Rocks Complex in Pembroke.

Mr Micallef Grimaud, who has been a graffiti artist since 1995, had already earmarked the spot and immediately suggested it to the festival organisers as potential site for a mural. They agreed and permission was sought from the council.

“The concept behind mine is a social one – the Monopoly man represents how certain people in power get away with everything and are reigning over society,” Mr Micallef Grimaud said.

Admitting he “pushed it to an extreme”, he chose the game Monopoly as it focused on money and he felt that it symbolised capitalism.

People are driven by money and a €10 note can be seen floating from a large butcher’s hook held out in front of the monopoly man.

On the cart behind him is a statue of Lady Justice with her blindfold pushed up onto her forehead, together with factory buildings and the facade of a Wall Street building – the hub of financial markets.

“The oxen represent people working hard while the floor of skulls means that everyone keeps going over everything – there is no sense of guilt anymore,” he said.

The mural was painted using a cherry picker and around 120 cans of spray paint as he drew free-hand on the façade of a three-storey building.

One of its advantages was that the facades chosen by Mr Micallef Grimaud often stayed in long periods of shade. “I would paint from 6 to 10am and again from 1 to 8pm”.

The White Rocks area was originally developed as quarters for the British services. When the British left, the area was turned into a tourist complex but it eventually closed down and was allowed to fall into ruins.

The site has been earmarked for several projects over the years which never materialised. Last year the government issued an international call for expressions of interest for the design, construction and operation of the complex.