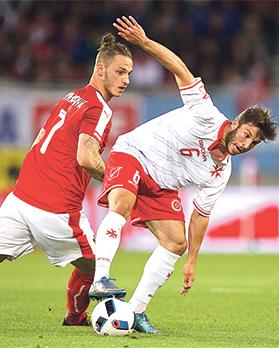 Malta winger Luke Gambin has turned down a move to Leyton Orient after his current club, Barnet FC, had agreed a fee upwards of £100,000 with their League Two rivals.

Barnet had placed Gambin on the transfer list after he rejected their offer to sign a new contract as his existing deal runs out at the end of the season.

The 23-year-old confirmed that he had decided against joining Leyton Orient but would not elaborate further.

“The situation is that I’ve turned down the offer from Leyton Orient,” Gambin told the Times of Malta soon after landing in Tallinn yesterday afternoon ahead of Malta’s friendly against Estonia tomorrow.

“I’ve just been informed by the club that they have released a statement.”

Gambin’s stock has been on the rise for some time and his lively performance in Malta’s 2-1 defeat to Austria in a friendly match last May further enhanced his burgeoning reputation.

Malta coach Pietro Ghedin has named Gambin in his 20-strong squad for tomorrow’s warm-up against Estonia in Parnu and the opening 2018 World Cup Group F qualifier against Scotland at the National Stadium on Sunday.

Despite the uncertainty over his club future, Gambin insisted that he is only focusing on Malta’s games. “I’ve just arrived in Estonia and I’m only focusing on the national team,” Gambin, who was granted Maltese citizenship in May, said.

“I’m concentrating on what I’m doing now, the rest is out of my hands.

“I’m looking forward to the game against Estonia and the qualifier against Scotland.”

Barnet FC had earlier confirmed that Gambin had declined Leyton Orient’s offer with chairman Tony Kleanthous saying the club had no qualms about the winger’s desire to play at a higher level.

“Barnet FC had hoped that Luke would sign a new contract this summer, but made him available for transfer once it became apparent that he would not do so,” the League Two club said in a statement on their website.

“Offers have come in from a number of clubs in League Two, but Luke Gambin made it clear that he wants to move to a club playing at a higher level.”

Kleanthous, the Barnet FC chairman, said: “Luke is an excellent player and we can fully understand his desire to test himself in a higher division.

“Of course we would have preferred that he stayed with Barnet this season, but unfortunately it has become quite clear that he wishes to move elsewhere.

“With the transfer window closing shortly we have had to quickly list him.”