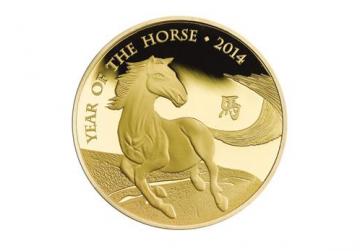 The first ever UK legal tender coins to celebrate the Chinese zodiac cycle have been produced by the Royal Mint.

Gold and silver versions of the “lucky” Lunar coins are available and the first in the new series is dated 2014 to mark the forthcoming Year of the Horse. Artist Wuon-Gean Ho, who is of Chinese descent and was born in the UK, was commissioned to create the design for the new coin.

They are being produced as limited editions, with 8,888 Year of the Horse coins created in total. Eight is considered a lucky number in Chinese culture.

Censors in the United Arab Emirates broke up the screening of Sylvester Stallone and Arnold Schwarzenegger’s latest action film after discovering a character cursing in Arabic.

Cinemas in the Emirates had to withdraw Escape Plan, and cut the offending words. The revised version was back playing within hours.

The film features Stallone and Schwarzenegger trying to escape from a futuristic, fortified prison.

Chummy chimps get pally with robots

Chimpanzees are willing to socialise and communicate with robots, researchers claim.

Dr Marina Davila-Ross, of the University of Portsmouth, has carried out the first study to examine how primates interact with automatons.

The results show that chimps respond to even basic movements made by a robot, which the researchers believe demonstrates they want to communicate and interact with other “creatures” on a social level.

The research, published in the journal Animal Cognition, outlines how chimps responded to a human-like robot the size of a doll.

Silence is golden for Brooklyn’s diners

The latest fad in New York City dining is eating in silence. A restaurant in Brooklyn’s trendy Greenpoint district is serving up a four-course meal of organic, locally-sourced food, but is not allowing any chit-chat.

Eat restaurant chef Nicholas Nauman said he was inspired to put on the occasional ‘No Talking’ affairs after spending time with Buddhist monks in India. He says the silence allows customers a chance to better experience the food.

Some of the city’s restaurants already offer the chance to eat in the dark. Others feature the ability to consume not just the food – but the menu too. 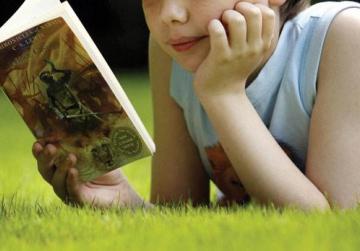 Well-meaning adults can destroy a child’s love of reading by giving them “worthy-but-dull books”.

At the second annual Reading agency lecture at the Barbican in London, author Neil Gaiman, best known for novels including American Gods and The Graveyard Book, said the simplest way to ensure children are literate is to teach them to read, and to show them that reading is pleasurable by letting them read the books they enjoy.

There is no such thing as a “bad book” for children, he suggested, arguing it is “snobbery” to dismiss authors such as Enid Blyton as bad for young people.

A giant skeleton of a dinosaur which last roamed Earth more than 150 million years ago is set to fetch up to £600,000 at a British auction next month.

The 55ft-long (17m) specimen of the long-necked Diplodocus longus is believed to be the first UK sale of a large dinosaur.

The 19ft-tall (6m) female, nicknamed “Misty”, was found almost completely intact in 2009 by the sons of palaeontologist Raimund Albersdoerfer in the United States. He had been taking part in an excavation when he sent his sons to dig nearby “to get them off his back”.