Glasses given as a present by Hollywood screen idol Humphrey Bogart are set to fetch an estimated sale price of £3,500 (€4,000).

The small and large glasses are engraved with Bogart’s initials and were a gift to public relations man Bill Rowland Hill. Bogart wanted to give something special to Mr Rowland Hill for his help in publicising the classic 1951 adventure film The African Queen. Accompanying the glasses is a letter signed “Bogie”, as Bogart only did to friends. The letter, written on 20th Century Fox-headed notepaper ends: “Once again sport, thanks a million.”

The glasses will be sold during the 23rd Winter Fine Art and Antiques Fair at London’s Olympia which is being held between November 4 and 10. (AP)

Soldiers known only ‘unto God’

A decision to remove the inscription “known unto God” from the Tomb of the Australian Unknown Soldier has been dropped after a public outcry.

The sandstone war memorial opened in 1941 to commemorate Australians killed in the First World War and is among Canberra’s most popular tourist attractions.

It had been proposed to replace the phrase “known unto God,” attributed to Rudyard Kipling, with the inscription: “We do not know this Australian’s name, we never will.” (PA)

Mr Bean star Rowan Atkinson has been awarded a CBE by the Queen for a career making the nation laugh.

The comic actor was presented with the honour during a Buckingham Palace investiture ceremony. Atkinson, who has a passion for fast cars, declined to speak to the waiting press.

He first found fame as part of the satirical series Not The Nine O’Clock News, and later his lead role in the long-running Blackadder series made him a household name.

But his creation, Mr Bean, made an international star out of the performer. (PA) 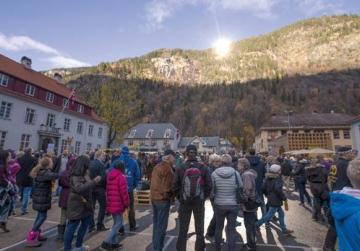 A village in Norway is seeing the winter sun for the first time thanks to a giant array of mirrors.

Tucked in between steep mountains, Rjukan is normally shrouded in shadow for almost six months a year. But faint rays have reached it at last via three 183-square-foot mirrors placed on a mountain.

Cheering families, some on sun loungers, drinking cocktails and waving Norwegian flags, donned sunglasses as the sun crept from behind a cloud to hit the mirrors and reflect down onto the faces of delighted children below.

The plan to illuminate Rjukan was first mooted 100 years ago by the Norwegian industrialist Sam Eyde, who built the town to provide workers for a hydroelectric plant. Picture shows people gathered in Rjukan during the official opening of giant sun mirrors erected on the mountainside. (AP)

Housework is no exercise activity

People who count housework as exercise could be fooling themselves, research has suggested.

Including gardening, DIY, vacuuming or cleaning in a tally of weekly exercise might give people a false sense of how active they have been.

Until now, studies have suggested housework counts towards a weekly round-up of moderate activity. (PA)