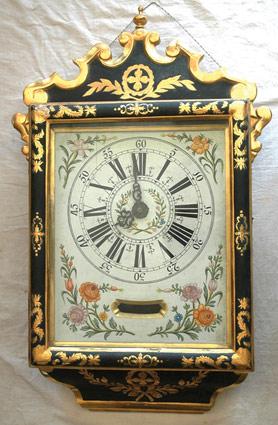 After purchasing or constructing a house, one starts planning how to enhance it with furniture. The idea is to turn the residence into a real home.

Some may think about decorating their home with artistic objects that are part of the Maltese heritage. One of the items often included in such collections is the Maltese clock, Tal-Lira. Robert Attard and Romina Azzopardi wrote in their reference book Antique Collecting in Malta that the famous Arloġġ Tal-Lira (‘pound clock’) is probably the most sought-after genre of Maltese painted and gilded furniture.

They add: “Maltese clocks are in high demand, and are consequently very expensive.”

The popularity of Tal-Lira clocks increased after Fondazzjoni Patrimonju Malti organised an exhibition in 1992 that focused precisely on these clocks.

History of the Maltese clock

The origin of the Maltese clock is buried in the past. One person who promoted clock-making in Malta was Grand Master Manoel Pinto de Fonseca (1741-1773), who employed a clockmaker in his court named Clerici.

Some are of the opinion that Clerici was an Italian immigrant whose main task was to produce a large clock for the Magisterial Palace, the main residence of the head of the Order at Valletta.

It was the custom in Malta, in the early 19th century, for an employer to offer his maidservant the choice of either a Maltese clock or a gold coin as a wedding gift

By time, clocks became popular with the members of the Order and the Maltese nobility. Rich Maltese clerics also became interested in clocks. Churches started to include clocks in their facades. Mantelpiece clocks were used to decorate a chest of drawers (gradenzi).

But the most popular clock became the wall-hung clock. These latter clocks started to decorate church sacristies, auberges and the homes of the aristocracy and rich clerics.

Hung in prominent positions on the walls of corridors or main rooms, their purpose was both to tell the time and to decorate the wall space above a chest of drawers.

In order to produce this type of clock, three artisans had to be involved – the carpenter, the clockmaker and the gilder, who also coordinated the manufacturing process and handled the final touches.

The Maltese clock has particular characteristics. It consists of a highly-decorated wooden box with two doors. The inner door features the clock-face, the dial and a small aperture showing the pendulum.

The outer door includes the glass pane, which protects the mechanism from dust. Its numeral dial is in the Roman style. Number four is produced in a unique figure showing four strikes (IIII) instead the usual IV.

At the centre of the dial one finds a Maltese rural or maritime scene, a fortress or some flowers. If the clock was commissioned, it usually featured the family’s coat-of-arms in the upper part of the clock frame.

Some clocks, instead of the family’s or Grand Master’s coat-of-arms include the eight-pointed cross, the symbol of the Order of St John. The clocks were painted in different colours, mainly red, green, light blue and maroon. Sometimes they were also painted in black.

At first the mechanism of the clock used to be made of wood, but through the years this was replaced by steel. This change improved the timekeeping capabilities of this clock.

The Maltese clock face is highly-decorated, with models usually featuring a hand-painted flower pattern and gilded with 23.5 carat gold leaf.

It was the custom in Malta, in the early 19th century, for an employer to offer his maidservant the choice of either a Maltese clock or a gold coin as a wedding gift. Some believe this custom led to the clock’s name

Attard and Azzopardi, in their book say that: “The Maltese clock has an irresistible appeal to collectors, because it seems to combine all the elements the Maltese collector looks for history, character, fine Maltese woodwork, precious ornaments, a sophisticated device, and occasionally even a painting of a Maltese subject.”

Nowadays the original Maltese clock is very hard to find, but replicas are still being crafted.

A few years ago a local furniture manufacturer started producing high-quality reproductions of the Maltese clock.

These replicas were decorated with gold leaf and also bore carvings.

Their colours were very similar to the originals. As the demand for these clocks is still high, it is about time that some businessman or firm realise the potential these objects have on the local market.

This would revive the tradition of clock-making in Malta, which is currently almost extinct.

It is worthwhile to say that rough replicas are being made as souvenirs for the tourist market.

In case you are thinking of buying an original Maltese clock or else opting for a replica, you would do well to pay a visit to places of interest which house one or two original Tal-Lira clocks.

These include the Inquisitors’ Palace Museum at Birgu, the Wignacourt College Museum at Rabat, the National Museum of Fine Arts and Casa Rocca Piccola both at Valletta and the Phoenicia Hotel at Floriana.