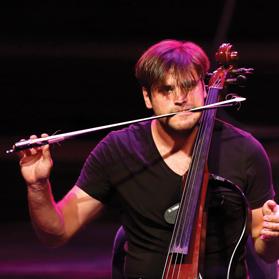 The act must certainly not fall off the musical map.

“This is not a serious classical concert,” the 2Cellos musicians told the full house at the opening concert of the Malta Arts Festival at Pjazza Teatru Rjal on July 14. “You can scream and dance, come and dance on stage,” they said. No-one danced on stage, but there surely was no shortage of screaming, dancing and jumping at the foot of the stage and all along the stalls by the end of the concert.

Croatian virtuoso cellists Luka Sulic and Stjepan Hauser first made a name for themselves when their rendition of Michael Jackson’s Smooth Criminal was uploaded on YouTube. The video, which was originally released in order to help the two classically-trained musicians financially, has been seen by over five million viewers.

Seated on a close-to-bare stage, the affable Croatian duo opened with the Benedictus from Karl Jen-kins’s The Armed Man: A Mass for Peace. Playing to recorded accompaniment, the cellists set the mood with a heartfelt rendition of this majestic number. In perfect sync with each other, they flawlessly took it in turns to carry the melody while displaying their dexterous skills on their skeletal-looking electric cellos.

Having got this one classical number of the night out of the way, the duo effectively built up their playlist, and momentum, cleverly and flawlessly jumping from one genre to another, be it rock, pop, grunge, disco or club tunes.

The younger members of the crowd evidently loved every minute of it, heartily applauding at the end of each song, whether it was the moody Shape of my Heart by Sting, a slower and more emotional interpretation of Coldplay’s upbeat Viva La Vida, U2’s melancholic With or Without You, Michael Jackson’s catchy Human Nature and the fast-paced Smooth Criminal, the Prodigy’s pumping Voodoo People, Nirvana’s grungy Smells Like Teen Spirit, AC/DC’s rocking Highway to Hell, The Rolling Stones’s foot-tapping Satisfaction, Rihanna’s dance-poppy We Found Love and Sting’s romantic Fields of Gold.

Smells Like Teen Spirit was particularly impressive with the cellists’ quick bowing and precision. Their cellos were practically an extension of themselves as they nimbly used not only classical techniques such as pizzicato, but at some points practically turned their cellos into guitars, strumming strongly away on them.

By the time we had reached the AC/DC and Rolling Stones numbers, the crowd was suitably pumped up enough and was jumping to the music, even singing along to some lyrics.

Their cellos were practically an extension of themselves

Although the two cellists were sometimes considered rivals because they used to compete against each other before they became partners, the rapport between the two is impressive. The chemistry was almost tangible as they seamlessly weaved themselves around, leading and accompanying each other.

Speaking of chemistry, the cellists certainly enjoyed using their strapping good looks to their advantage, making more than a passing reference to socialising with the female members of the audience at various points in the concert as well as letting off rock ‘n’ roll energy, their smooth hair flying around. At one point Hauser even threw himself on the floor and played the cello on his back.

The two are definitely charismatic and know how to work the crowd. But although I appreciated the light mood created by their goofy banter in-between acts, I have to admit the jokes were a bit cheesy and repetitive.

These two are an extraordinarily-gifted pair who are so talented that they make it look like a piece of cake to play the cello with such versatility. While this is a feat in itself, one wonders what’s next for the duo as covering songs runs the risk of going stale, and these two prodigies certainly must not fall off the musical map.