Police have not yet established who was at the wheel of the Mazda Demio that allegedly hit Antoine Degabriele two weeks ago in Żejtun and investigators are still searching for the driver of a second vehicle that raced past just before the fatal impact.

Details about the tragic incident that took place late on August 4 night on Triq President Anton Buttigieg, began to surface in court on Friday when 23-year-old Dean Donovan Frendo was escorted for the first sitting following his arraignment almost a fortnight ago.

As the registered owner and licence holder of the silver Mazda model since last year, the youth is pleading not guilty to involuntary murder, as well as reckless driving, failing to stop after the collision as well as tampering with evidence in the aftermath of the incident.

The lifeless body of the victim was discovered lying face up on a grassy patch close to the pavement, just four or five metres away from traffic lights.

'Bruising on the stomach and flies buzzing around'

It was exactly at 11:51am on August 5 that a call on the 112 helpline flagged the presence of the apparently lifeless body of a man at that spot.

“He was lying face up, with lots of bruising on the stomach and flies buzzing around in the heat,” recalled police sergeant Maurizio Falzon who was the first officer to get to the site after the call.

He did not spot the victim immediately since the grassy patch was at a slightly lower level beyond the pavement.

But when he did, he also realised that part of a car mirror lay next to the body which appeared to show no signs of life.

The officer called an ambulance and police reinforcements, then looked around noticing other car parts strewn nearby, one of them bearing the name ‘MAZDA.’

Earlier that morning, a missing person report had been filed at the Birżebbuġa police station and the officer appeared to note a resemblance to the hit-and-run victim.

The duty magistrate was informed and an inquiry set up, with scene-of-crime officers and court experts taking over investigations, while the incident site was closed off. 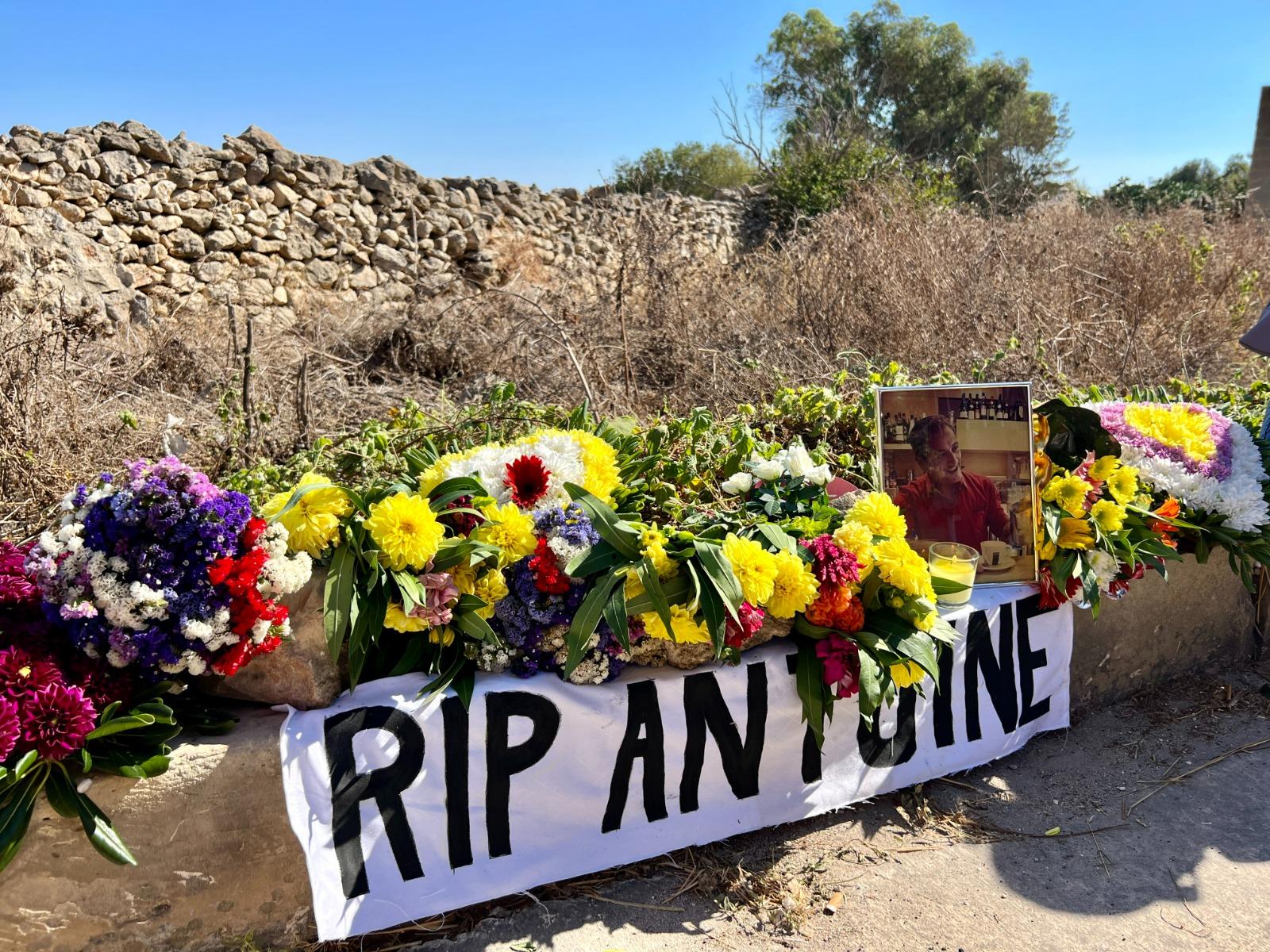 Tributes for Antoine Degabriele, who was killed in a hit-and-run two weeks ago. Photo: Times of Malta

Accused turns up at panel beater's garage at 9am

A sprayer and panel beater took the witness stand on Friday, recalling how on August 5 at around 9am, a youth went to his Xgħajra garage requesting repairs to his damaged vehicle.

He wanted those repairs as fast as possible, explaining that he only had one car, testified Justin Grima.

The young owner, whom he identified as the accused in court, had told him that a certain “Zach” had recommended his services to repair the front parts of the vehicle including the mudguard, bonnet, windscreen and lamp.

He wanted those repairs as fast as possible

The panel beater suggested that if the client himself could produce the necessary parts, he could manage to fix them within a day.

The two agreed on the price and the youth, who had gone to the garage on foot, set off, returning later with a silver Mazda Demio.

“It was very dirty, with lots of dents, like any car used on a daily basis,” said the witness.

Questioned further, he explained that “the windscreen was all smashed.”

The following morning he had started work on the car but soon, two persons walked in, headed to the car, asked about it and then identified themselves as being from the Major Crimes Unit.

By that time, he had already thrown away the damaged windscreen, but the other parts were lying in his garage yard and were retrieved by police.

Grima explained that the parts, except for the windscreen, had been taken to his garage by a third party that same evening after the car owner had first approached him.

Accused tells police he heard about accident, was sorry

Frendo was arrested late on August 5 at a  Birżebbuġa flat and taken to the lockup for questioning.

He opted mainly for the right to silence but at one point, “quite spontaneously,” he told police that he had heard about an accident in which a person had died and claimed that “he was sorry,” testified prosecuting Inspector Roderick Spiteri.

Various CCTV footage had been retrieved from the incident site.

One of that footage, seen by Spiteri, showed two vehicles “that appeared to be driving very fast”.

The first car flashed past and then the second came along, apparently closer to the pavement.

That was the one that hit the victim who was flung into the air, turned over and landed on the ground.

Footage does not show moment of impact

Under cross-examination by defence lawyer Franco Debono, the inspector confirmed that the footage did not show the moment of impact.

He could tell that both cars were heading in the direction of Lasco supermarket.

However, police were still working to determine who was driving the car involved in the collision and also to identify and track down the driver of the other vehicle.

The spot of impact appeared to be some metres ahead of the traffic lights. In the footage seen by the witness, those lights were not visible.

Making submissions on bail, Debono argued that two weeks was sufficient time for police to have identified the other driver.

After hearing the parties on the request for bail the court, presided over by magistrate Ian Farrugia, upheld the arguments put forward by the prosecution.

The serious nature of the charges, the ongoing investigations and the fact that a third party was involved, all merited the denial of bail at this stage so as to avoid hindering the proper administration of justice.

Finally, the court decreed that there was sufficient prima facie evidence for the accused to face trial on indictment.

The case continues in September.