The demand for blood platelets, used mainly for cancer treatment, has risen by more than a third in the past five years. Sarah Carabott follows this vital blood product’s journey from dedicated donors – who even cut down on their alcohol use – to the grateful receivers.

When her son was diagnosed with cancer, Caroline Spiteri dreaded the day she would be told a matching platelet donor could not be found, as she knew this would delay his recovery.

One year on, Yann is in remission, in part thanks to several donors, some of who were called on the same day that the 12-year-old needed treatment.

And following the ordeal, Ms Spiteri has herself become a donor, as she now understands that blood donation is a vital part of treatment.

Yann was diagnosed with a brain tumour last year and he needed to undergo four cycles of chemotherapy between April and August.

Throughout these four months he needed several blood transfusions – platelets were an essential part of his treatment, his mother explained. His platelet count dropped drastically following chemotherapy and he could only continue his treatment once the count was increased through transfusions, she added.

“One day his count was very low and we were told a matching donor could not make it. I spent the night worrying that the count would plummet further by the following morning,” the 38-year-old explained.

Before her son’s diagnosis, Ms Spiteri had never heard of platelets donation. “Until you face some form of illness, you will probably not realise that without a supply of blood, many lives are at risk,” Ms Spiteri said.

Ms Spiteri had never donated blood, and not even her husband, Kenneth, a blood donor for at least 10 years, had managed to convince her.

“I was afraid to donate blood, but after seeing what the donations meant for my son’s recovery, I knew I too could do my bit. I soon realised that there was nothing to be afraid of.”

Yann too is aware of how crucial blood has been for his recovery and is grateful to all those who unknowingly helped him.

“When you tell people that you’ve been diagnosed, some ask how they can help. Donating blood is one very good way of alleviating some of the worry burdening the parents,” the 13-year-old said.

The demand for platelet donation has increased over the years, especially due to the increased success of cancer treatment. An average of six therapeutic doses of platelets are  transfused daily at Mater Dei Hospital.

Consultant haematologist Dav-id James Camilleri explained that patients with very low platelet counts, either due to chemotherapy or a disease, were at risk of major bleeding, mainly intracerebral, gastrointestinal or genitourinary. Intracerebral bleeding can be fatal.

Patients who require platelet transfusions include those who receive intensive chemotherapy for acute leukaemia, high-grade lymphomas and bone marrow failure syndromes. Meanwhile, bleeding due to low platelet counts as a cause of death in haematology patients is second only to infection.

The haematology department is the number one platelet consumer at the hospital. Platelets are also required by other departments, including intensive care.

What’s in our blood?

Human blood has two main parts – plasma and blood cells. Plasma is mainly water but also contains proteins and salts, among other things.

‘The feeling of giving never gets old’

Donating platelets has become a mission for Matthew Galea, who limits his alcohol intake on Saturdays just in case he is called by the National Blood Transfusion Service the following day.

The 32-year-old, who has been donating blood since he was 17, started donating platelets some 10 years ago. He remembers the nurse’s palpable excitement when one day, while donating regular whole blood, he was told he could start donating platelets instead. 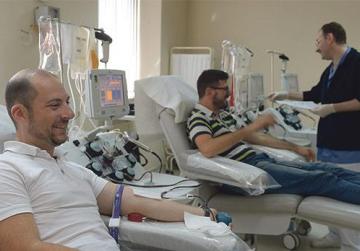 Mr Galea spoke to this newspaper from the unit in Pieta 15 minutes after receiving a call because there had been a request for platelets.

He noted that he would feel guilty if he could not make it whenever he received the calls. Platelet donation is the main reason why he controls his alcohol intake on weekends. He also tries to avoid travelling to remote countries, as he would not be able to donate blood for months after his return.

“When you receive that call, you know that there is someone who needs platelets urgently, whether because of some illness, an operation or an accident. They could be children.

“They could be my own relatives.”

Fellow donor Chris Grech has been donating platelets since he was 18.

When you receive that call, you know that there is someone who needs platelets urgently

“I actually look forward to the telephone call. The feeling you get when you give such a gift never gets old,” the 33-year-old said.

He too tries to keep a healthy lifestyle and thinks twice about his travelling plans.

Mr Galea and Mr Grech are two of 450 platelet donors who the National Blood Transfusion Service calls when it receives a platelet request.

Not everyone qualifies as a platelet donor – they have to have donated regular whole blood at least three times, weigh at least 65 kilos, have a high platelet count and an adequate blood vessel from which to extract blood, explained Angelo Degiorgio, a practice nurse and the blood donations services manager.

Platelet donors are usually called overnight or on the day itself, as the shelf life of platelet units is only five days. By contrast, regular whole blood donations last around 40 days.

Donors like Mr Galea and Mr Grech specifically donate only platelets, of which there are at least two donations daily.

However, the National Blood Transfusion Service also produces two more units by extracting the platelets from a pool of five regular whole blood donations of the same blood type.

Tony Micallef, the practice nurse in charge of donor liaison, explained that lately, the unit at Pieta had to increasingly resort to calling donors on the day. Donors made a great effort, including cutting short a Sunday at the beach, he noted.