A nine-storey block stands at the water's edge in St Julian's. It is the result of a convoluted planning process which began back in 2014. Prof. Alex Torpiano tells the story in three acts.

To preface the story, in 2014, the redevelopment of the interior of the smaller house is proposed behind the retained roughly 5.2-metre façade.

The Superintendence of Cultural Heritage observes that the site possibly overlapped the 18th-century St Julian’s Entrenchment and urges careful archaeological monitoring during the work. In the first instance, the proposal is recommended for refusal because the back elevation was not considered acceptable in the context of the “short and long distance views of the UCA”. 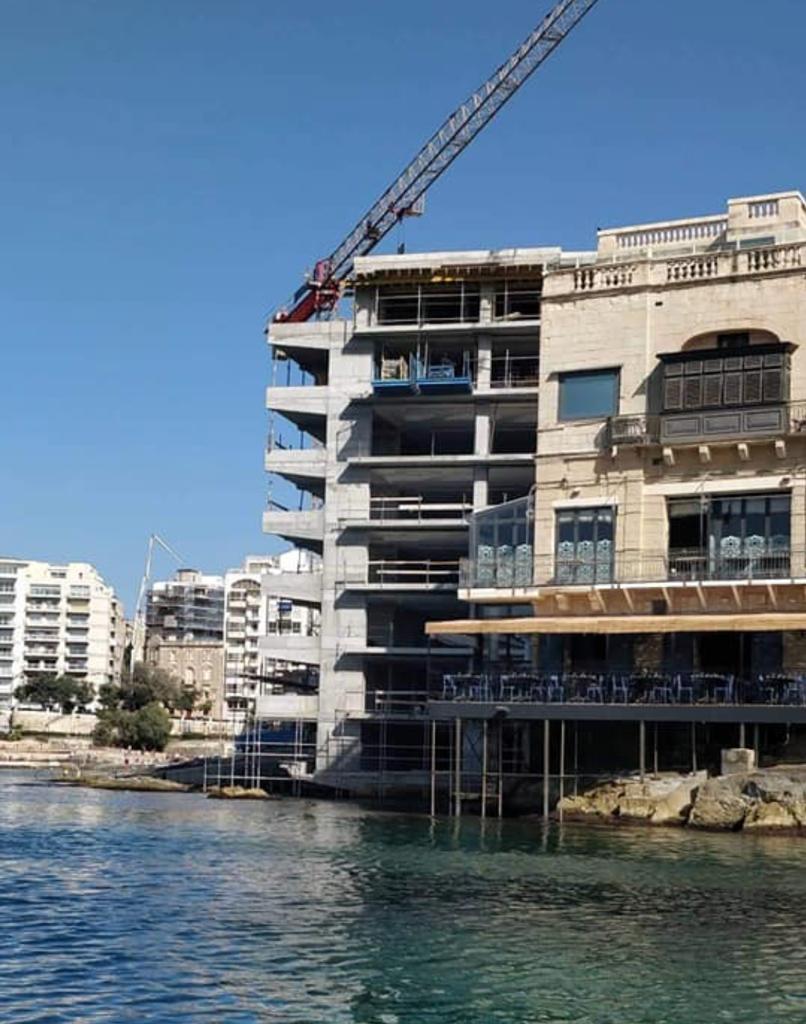 The Environment Planning Commission (EPC) does not agree and approves the application – no mention of the possible overlap with the St Julian’s Entrenchment appears in the six pages of conditions listed in the permit.

In Act 1 of the story, in 2016, it is proposed to demolish the interior of the bigger three-storey house while retaining the 17.5-metre façade and to replace the interior with four storeys of apartments above street level (that is, within the same height as the façade).

Three storeys below street level are proposed, the upper two as offices and the lower one as a car park.

These lower storeys are tucked in behind an existing seaward wall (part of the enceinte?), which is proposed to be retained.

The three upper levels in the wings of the broadly U-shaped plan of the original building were stepped backward on every floor; the main building volume at the top was at around 17 metres from the forward edge of the same seaward wall. The proposal pushes the building line seawards by around 16 metres so that, instead of a terraced volume, a “solid” block, roughly 27 metres deep, is proposed, with, additionally, approximately 3.5-metre deep terraces at each level projecting beyond the official building alignment. 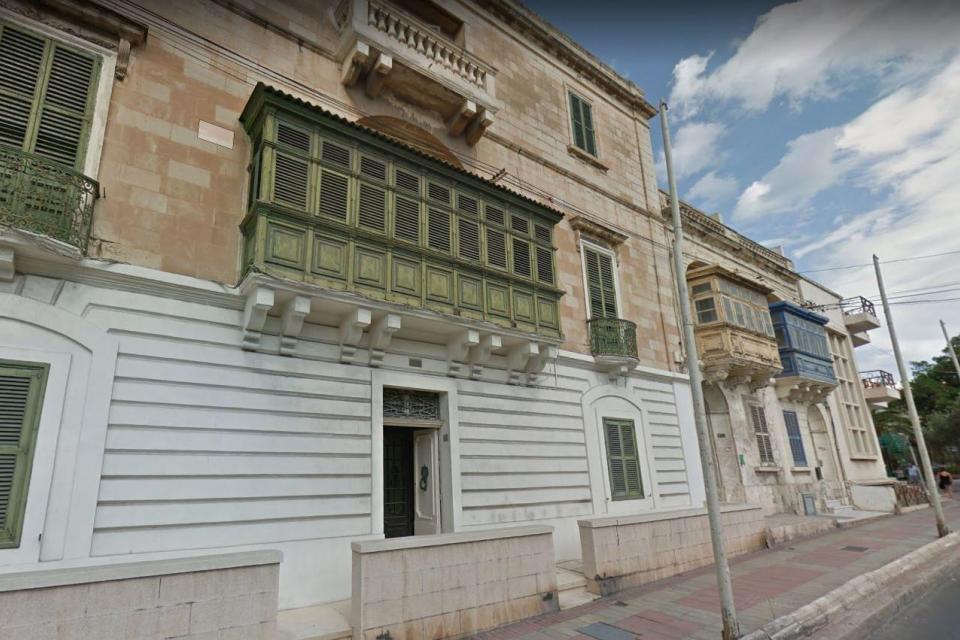 After some timid observations from the Design Advisory Committee on the architectural treatment of the seaward façade and from the Superintendence of Cultural Heritage on the penthouse level that extends beyond the height of the original building, the proposal is recommended for approval. The case report glibly highlights SPED objectives – for example, the presumption against demolition of buildings within UCAs, or the obligation to improve the townscape and enhance the “character and amenity” of the area – but avoids any evaluation against these objectives.

This is how to obtain a permit for a nine-storey block, right at the water’s edge, effectively replacing two Grade 2 scheduled houses within an Urban Conservation Area

Instead of a Grade 2 building restructured within its original envelope, the net result is a crude cuboid of apartments, ‘hidden’ behind the original façade. The permit conditions emphasise the preservation of the original patina and lichen growth as well as the pointing on the façade; however, apparently, no one points out that the whole, scheduled, built volume, located at the water’s edge, is being radically transformed.

In Act 2, in 2017, another application is submitted, now covering both sites. The proposal again comprises one car park level and two office levels below the street – with some adjustments to the slab levels and a complete removal of the original seaward wall – and five floors above the street (the lowest for offices, under four residential floors).

The original Superintendence of Cultural Heritage objections on the “negative impact on views across the bay” are easily “resolved” by reducing the internal height of each floor so that the overall building lies within the height of the facade. The original objection of the DAC that the proposal jarred “with the setting of the scheduled buildings” somehow disappears.

Din l-Art Ħelwa’s objection that the building volume extended beyond the adjacent properties is dealt with simply by the observation that the DAC and the Superintendence of Cultural Heritage had no objection to the proposal – as if the directorate has no remit to itself evaluate any proposal against the same policies quoted in its report.

For example, according to the Structure Plan, alterations to the interiors of Grade 2 buildings would be allowed only “if proposed to be carried out sensitively and with least detriment to character and architectural homogeneity of the building”.

Act 3 is a work in progress, even while the building is being constructed. A fresh application, in 2018, refers, originally, to the conversion of the whole block into a hotel.

At a certain stage, the application changes into a proposal to convert all levels into offices, now eight storeys overlying a basement car park. The extra bit at the top, which had been removed to get the original permit, reappears, with no objection from the Superintendence of Cultural Heritage.

The current recommendation is for a refusal, not least because the proposal for 4,500 square metres of offices exceeds the Local Plan limit (of 75 square metres). The lower level projecting balconies are also, belatedly, deemed to impact the visual integrity of the area.

The determination of the application would conclude Act 3. Further developments of the story are not excluded.

If the story sounds convoluted, it is because it really is. The moral, however, is clear. If you wish to consume a big salami, you need to slice it into bite-sized portions. You might still get visual indigestion but you would profit nonetheless. This is how to obtain a permit for a nine-storey block, right at the water’s edge, effectively replacing two Grade 2 scheduled houses within an UCA, and abutting a safeguarded area of natural coastline!

Prof. Alex Torpiano is Dean, Faculty for the Built Environment at the University of Malta and a former president of the Chamber of Architects. He is also the executive president of Din l-Art Helwa.