Curtain Raiser Entertainment has recruited a number of international artists to create a Vaudeville extravaganza for the whole family.

From December 7-9, Patrick Vella, director of this show, will put on a vaudeville experience together with various Russian, Bulgarian, Czech and Maltese artists. The acts range from acrobatic adventures and comedies to new illusion acts that have never been seen on the island.

The Little Big Show will present also an impeccable light design show to complement the artists and the set which will resemble a circus on stage.

Throughout the show, guests will be entertained and surprised by a whole family of clowns from Bulgaria. The father, mother and child are all professional clowns with some new and interesting skits which are interactive, hilarious and interactive – audience members shouldn’t be shy if by chance they finish up on stage.

Also present will be two illusionists, one from Malta and one from the Urals, Russia. The Maltese veteran is Brian Role, who has extensive theatrical illusion experience on cruises, Dubai, Mexico and other countries while Ilia, the Russian illusionist promises a 10-minute original act that has never been witnessed before.

Another member of the team is Ksenya, from Russia as Ilia. He will be performing an amazing bubble act which will give a different dimension to the whole stage and auditorium while the Maltese Motion Acrobats and Petr from Czech Republic will be entertaining us with their dangerous stunts, flexibility and adventure. 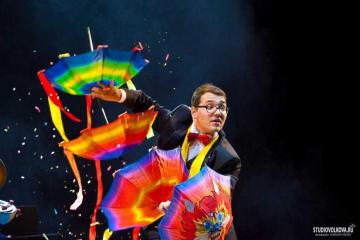 A great asset of this show is the act’s own Charlie Chaplin, coming straight from Sofia – the resemblance and acts are equal to the original with the difference that our own Chaplin is also an amazing multi plate spinner who will mesmerise the audience with his 10-minute on stage act. Their energy is incredible while their eagerness to give a magnificent spectacle this early December is huge.

Adding to that the act has some more surprises roaming in the auditorium before and after the show and interval.

Tickets are selling fast and are available from www.ticketor.com/curtainraiser or by calling 2189 5072 or 7991 8857. Tickets start from only €9 (plus tax). Platinum tickets with perks, group offers and family tickets are also available online.

The Little Big Show is being staged at the City Theatre in Valletta on December 7, 8 and 9. The four shows are on Friday at 7:30pm, Saturday at 7:30pm, Sunday matinee at 3pm and 6:30pm. For more information visit www.curtainraisermalta.com/thelittlebigshow