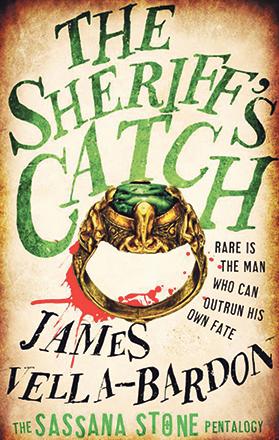 Within the first few pages of James Vella-Bardon’s novel, the reader is served with combat scenes, house burnings and a quest for revenge.

The year is 1585 and the initial setting is the Spanish-occupied Netherlands, where a rebellion is being brutally suppressed.

Needless to say, the Spanish soldiers are very unpopular with the Dutch natives. There is one exception, and that is Abel de Santiago, a deadly sniper who does not fully share his comrades’ violent tendencies. To make matters more complicated he is married to a Dutch woman. On the day his wife’s house is burnt down with her inside it, Abel makes it his life’s mission to track down the killers.

If you had the misconception that a historical novel is stuffed with facts and details, then Vella-Bardon takes that trope and turns it into something completely different. The reader is, instead, hurled into a rollercoaster ride of a novel with interesting plot developments.

As Abel’s quest for revenge materialises, he is captured and sold as a galley slave, finding himself aboard one of the ships forming part of the Spanish Armada. As popular history goes we all know how that fared, but Vella-Bardon focuses on a quirkier part of history as some ships from the Armada were wrecked on the Irish coast. Although the majority of Spaniards were tortured and killed, some did escape capture with a few even choosing to reside in Ireland. Abel is captured by English troopers that the natives call Sassenachs, who are brutal oppressors led by the titular sheriff.

Eventually Abel does manage to escape, and Vella-Bardon throws in some curveballs which change the direction of the novel. Abel also reveals a detail about his past which I cannot wait to see developed further in the forthcoming books (The Sheriff’s Catch is the first of a five novel series called The Sassana Stone Pentalogy. The other detail, which should play a bigger role in subsequent instalments is a mysterious ring which ends up in Abel’s possession.

It is worth exploring the character of Abel, as he is the main protagonist. Unlike most historical adventure novel characters, Abel is not a superhero. He isn’t dashing and righteous, however he is a dead shot, as well as being cunning and resourceful, and this is what saves him from some unpleasant situations.

Abel does have good qualities but will not hesitate to ignore his moral code whenever the situation requires it, and this is a realistic trait. Although I felt that the torture and fighting scenes were at times a bit overdone, I understand that this novel had to be explosive in nature, given that it is the first in a series. It also possesses a number of interesting underlying themes which distinguish it from other adventure novels.

As a case in point Vella-Bardon cleverly manages to show that history is circular when he displays the cruelty of the Spaniards towards the Dutch, who are in turn subjected to this same cruelty when they find themselves shipwrecked in Ireland.

The Sheriff’s Catch is published by the Penguin Random House-affiliated Unbound, who use a crowdfunding model to finance their books. It is no secret that today’s more interesting and risk-taking novels stem from other new publishing houses like & Other Stories, Salt, Galley Beggar and the experimental Dostoevsky Wannabe.

Unbound itself has also pub-­­lished Man Booker Prize longlisted author Paul Kingsnorth, whose debut novel The Wake revealed the power of new presses. The Sheriff’s Catch is part of this revolution.

The Sheriff’s Catch is also a fine debut which tackles a relatively unknown chapter of history while being historically accurate – Vella-Bardon consulted historical texts and historians about the events and happenings mentioned in the novel). There’s a memorable lead character, there’s definitely a ton of heart-stopping and chair-gripping moments and it will keep you waiting for the next four volumes to see how the story develops. Think of it as the first part of a blockbuster film saga, except with depth.

You can read more book reviews by Robert Pisani on his blog https://deucekindred.wordpress.com/ .