The funeral was led by President George Abela, accompanied by Malta's political leaders.

A particularly poignant moment was reached when, as the coffin was carried out of St John's Co-Cathedral, the crowd burst out into spontaneous singing of the National Anthem.

Another emotional moment for those present was when, at the end of the funeral, the Maltese flag which had draped the coffin, was presented to Mr Mintoff's daughters by the Commander of the AFM, Brig. Martin Xuereb.

This is how today's funeral unfolded (pls go to the bottom and scroll up): 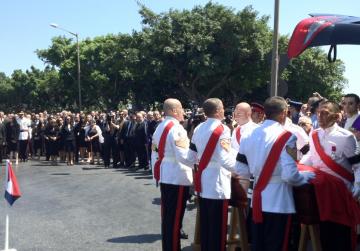 The coffin is placed in the hearse for the final journey. Picture - Jason Borg.

12.46 The gun carriage approaches the War Memorial at the end of the State Funeral. An AFM Guard of Honour forms up for the last salute. Arms are reversed. The people applaude. 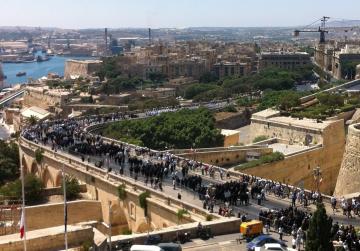 12.31 p.m. A poignant moment as the coffin is carried in front of the Auberge de Castille, which Mr Mintoff made his office. There is silence, other than the band playing a sombre tune. 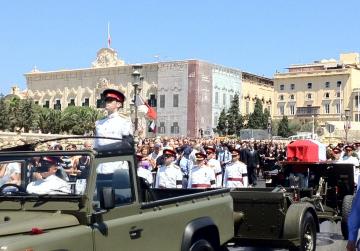 The funeral in its final stages. Photo: Jason Borg.

12.25 p.m. The funeral arrives at the top of Merchants' Street, below the monument of Mr Mintoff's predecessor, Sir Paul Boffa. People continue to applaud and shout Mintoff, Mintoff.

12.08 The crowd breaks out into spontaneous singing of the National Anthem, followed by applause and cheers. 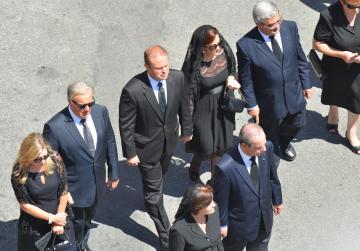 The Prime Minister, the Leader of the Opposition, the Chief Justice and the Speaker walk behind the coffin.

12.06 p.m. The President, the Mintoff family - holding hands -  the Prime Minister, Leader of the Opposition, former Presidents and other dignitaries take their place behind the gun carriage bearing the coffin. They are followed by members of the Judiciary, senior civil servants and the crowd.

The cortege is led by an AFM escort party and the AFM band, officials of the political parties, constituted bodies and trade unions and the members of theDiplomatic Corps and the Cathedral Chapter.

12.00 A salute is fired from the antique guns at the Upper Barrakka by Fondazzjoni Wirt Artna. 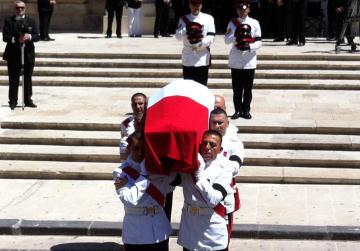 The coffin is carried out of St John's Co-Cathedral. Picture - Mark Zammit Cordina.

11.56 a.m. The coffin is carried out of the Co-Cathedral by the AFM pall bearers to long applause and the singing of Ave Maria by the choir. Many touch the coffin - now again draped with the Maltese flag - as it is carried down the aisle. Even more applause by hundreds of people who had waited in the sun at St John's Square. Shouting of Mintoff, Mintoff and Salvatur. 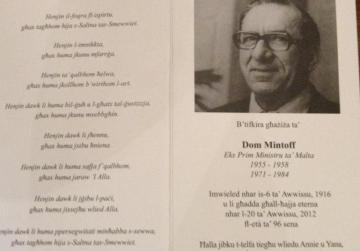 11.40 a.m. Applause as a blessing from Pope Benedict is read out. In the message signed by Cardinal Tarcisio Bertone, Secretary of State, the Pope assures the President and those present of his prayers for the deceased and invokes God's blessing.

11.38 a.m. Mementoes are handed out to those following proceedings in St. John's Square. Some people snatch them from each other and arguments briefly break out. 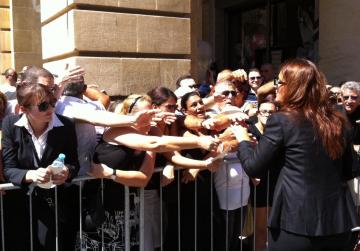 Mementoes are handed out to those following proceedings in St. John's Square. Picture - Mark Zammit Cordina.

11.10 a.m.The offerings are taken up to the altar by Yana Bland Mintoff and Anne McKenna Mintoff. 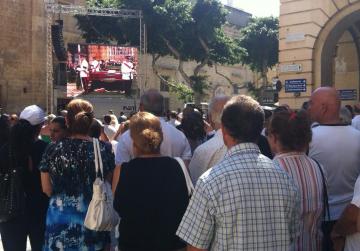 11.05 The bidding prayers are read by relatives including Mr Mintoff's brother Raymond and his daughter Yana, his sister Mary Grech and friends Fr Gordon Refalo, Fr Mark Montebello and Rose Buttigieg. Dr Yana Bland Mintoff's prayer is greeted by applause as she prays the Lord that the people appreciate the good work done by her father for their better well-being.

10.56 a.m. In his homily Mgr Cremona says funeral Masses should not be about eulogies. There were other places for that. 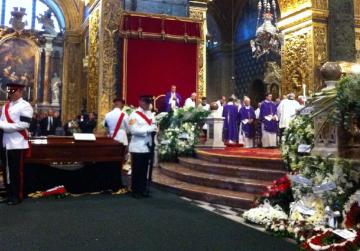 He, however, points to two virtues which distinguished Mr Mintoff. The first was his interpretation of the Lord’s command to Love thy neighbour, especially the poor.

While not everybody could agree with Mr Mintoff’s methods, no one could deny that he sought better conditions for the workers and the poor, Mgr Cremona said.

Secondly, Mr Mintoff loved his country He negotiated with the leaders of other countries to achieve the best for his country.

These were two virtues which distinguished his life.

10.30 a.m. The President and Mrs Abela arrive at the Co-Cathedral.

10.27 a.m. The Prime Minister and Mrs Gonzi arrive. The President is due shortly.

10.25 a.m. The coffin is carried into St John's amid applause from the congregation. It is placed before the main altar and the Maltese flag which had draped the coffin is ceremoniously removed. Soldiers take their place at the four points around it, arms reversed. 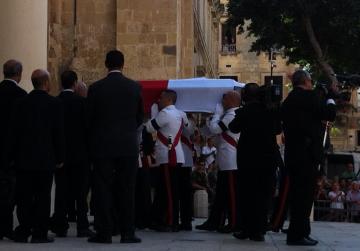 10.13 a.m. The people's shouts of Mintoff, Mintoff, reach a crescendo as the coffin arrives opposite St John's Co-Cathedral, where the bells toll. More applause as the gun carriage stops, the band forms in front of the Co-Cathedral. There is momentary silence. The pall bearers smartly march into position and raise the coffin. The shouting resumes. Somebody shouts Viva s-Salvatur ta' Malta. Then the crowd bursts into Mintoff, Mintoff as the pall bearers slowly climb the low steps into the Co-Cathedral. 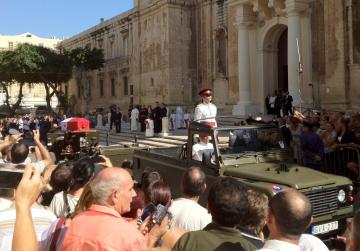 The funeral arrives outside St John's.

10.09 a.m. As the funeral turns into Republic Street people cry out Mintoff, Mintoff. 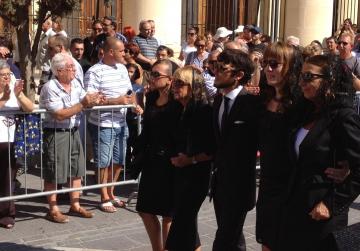 10.05 a.m. The funeral arrives opposite the law courts. The crowd is several lines deep. The scene is solemn, and dignified but the applause is constant. 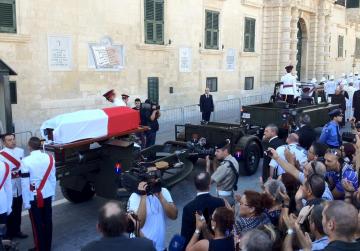 10 a.m. The funeral marches off slowly to the playing of Chopin's Funeral March. The people applaud. Many take pictures and some throw flowers. Grown man are among those sobbing. 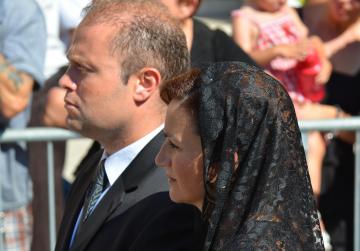 9.55 a.m. The family mourners take their place behind the coffin. They are followed by Opposition leader Joseph Muscat and his wife Michelle. The AFM band forms in front of the gun carriage. 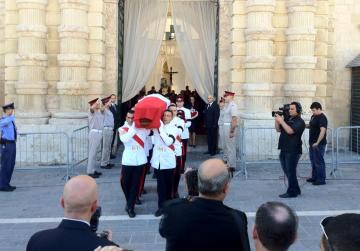 The coffin is carried out of the Palace. Picture: Jason Borg.

9.51 a.m. The state funeral starts. The coffin is carried out of the Palace by AFM soldiers. It is preceded by Fr Dionysius Mintoff and Fr Mark Montebello. Applause from the waiting crowd. His daughters and other members of the family including brother Raymond Mintoff struggle to hold back their tears. The coffin is mounted on the gun carriage.

9.38 a.m. An AFM Guard has formed outside the Presidential Palace alongside the gun carriage on which the coffin will be placed. The soldiers are wearing white ceremonial uniforms and helmets The drums are draped in black. 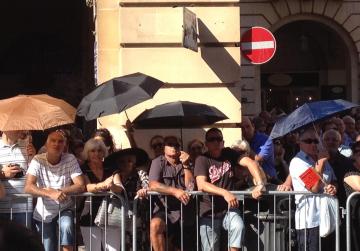 People line the route to St John's Co-Cathedral, standing behind police barriers. Some are carrying umbrellas as protection from the blazing sun. 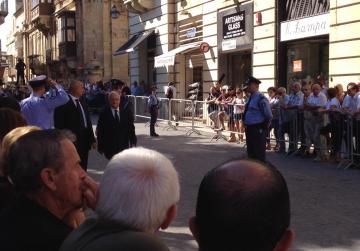 Other present include the Imam.

The state funeral brought to an end a political journey that was as long as it was controversial.

The route that the funeral followed, although similar to previous state funerals, had huge significance for those who followed Mr Mintoff's political life.

Mr Mintoff alongside Sir Anthony Mamo when Malta was declared a republic.

The Palace in Valletta, where lying in state continued this morning, was the seat of Parliament, where Mr Mintoff served for a record of almost 51 years. It was from the Palace balcony where he waved to the people in the rain swept evening of December 13, 1974 when Malta was declared a republic.

The funeral cortege marched out to the Palace Square - the scene of the last parade by British and Maltese forces before the British base closed down on March 31, 1979.

The funeral then continued to St John's Co-Cathedral, where funeral Mass was led by Archbishop Paul Cremona. 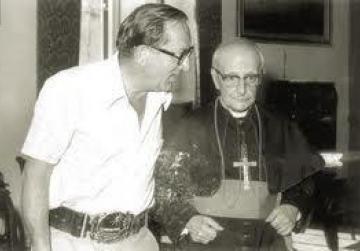 The funeral then emerged from St John's, opposite the bust of Nationalist leader Nerik Mizzi, Mr Mintoff's first political opponent from the PN. He served as prime minister for just three months in 1950 after having been exiled by the British in the war years. Mr Mintoff later called him Malta's greatest patriot.

After the Mass, the funeral proceeds up Merchants' Street, past the Foreign Ministry. Mr Mintoff had, for most of his years as prime minister, retained direct ministerial responsibility for foreign and home affairs, instead of appointing ministers for those areas.

The funeral then passed in front of the monument to Sir Paul Boffa, Mr Mintoff's predecessor as leader of the Labour Party. Mr Mintoff had split the party and ousted Dr Boffa in 1949 amid differences over compensation by the British for Malta's war damage and eligibility for funds from the Marshall Plan. Many felt he had humiliated Dr Boffa. It was Mr Mintoff himself who later issued instructions for the building of the monument.

A few metres on and the funeral pased in front of the main door of the Auberge de Castille. It was Mr Mintoff who converted the building into the Office of the Prime Minister - moving it from the Auberge d'Aragon. He will be remembered for the way how he used to bound up the steps on arrival for work.

The funeral then proceeded past the monument of Manuel Dimech, whom Mr Mintoff admired, and a waving George Borg Olivier. Many will doubtlessly wonder how long it will take for a monument to Mr Mintoff to be erected close by.

The funeral then proceeded down Glormu Cassar Avenue, like Dom Mintoff, one of Malta's best known architects. 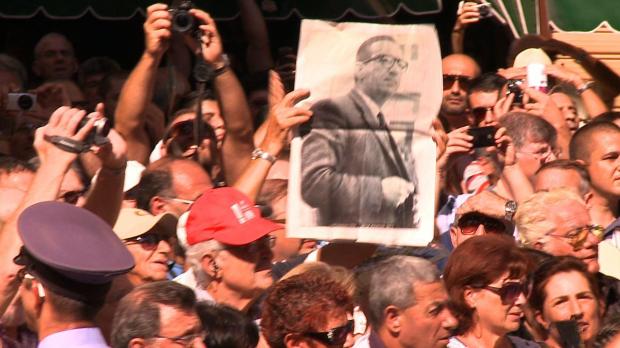 A section of the crowd this morning. Picture: Mark Zammit Cordina. 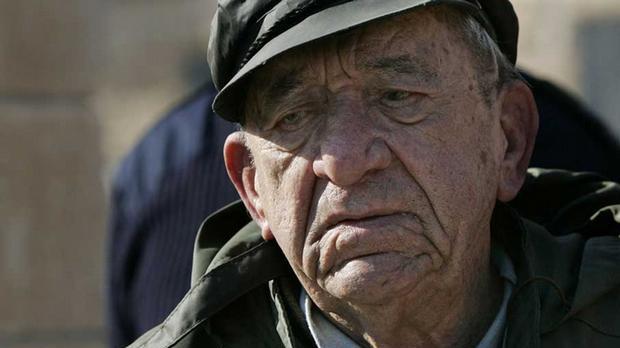 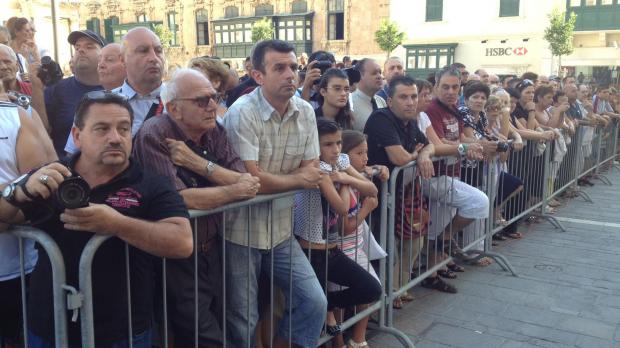 People gather outside the Palace.