I have seen La Traviata dozens of times in Malta and abroad. A fine performance of this immortal masterpiece has never failed to move me. Yet, few interpretations of the doomed young demi-mondaine’s role have moved me to the core as did soprano Elena Mosuc’s at the Aurora Theatre.

When things reached a crisis in Violetta’s life, Mosuc’s was a perfect etching of the role with her superb blending of technique and inter-pretation. Her phrasing and the accents on certain words and notes simply made one feel every stab of pain going through her frail body.

This contrasted so greatly with her equally (and excellently carried off) great scene in Act I, È Strano… Follie!, which require other vocal and interpretative skills with flashes of high coloratura.

This is not to mention the pathos in the other great scene with Giorgio Germont, which reveals Violetta’s true and admirable character. Pathos and drama all the way, it was an unfolding of an appealing personality that continued throughout the opera with an amazing Addio del Passato with its ethereal breath-ing and Violetta’s final reckoning with her desease. Yes, indeed, hers is a voice to die for and a tremendous coup in having her at the Aurora.

Let me laud them, for they too deserved it: the voices and interpretation of the leading male characters starting with the soprano’s Romanian compatriot Stefan Pop.

His beautiful voice made a most favourable impression from the very beginning. From being a Provençal country lad at the beginning of the opera, he learns the ways of the gaudy Parisian demi-monde he frequents. A rather negative occurrence because from an ardent besotted lover he becomes a total cad, shaming Violetta in public with passion and disdain. 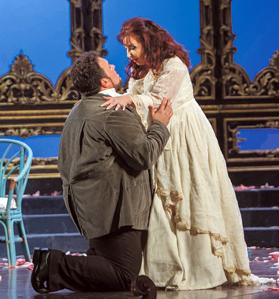 This, of course, is mainly because of paternal interference for the sake of propriety in which Alfredo, the role taken up by Italian baritone Marzio Giossi – no newcomer to the Aurora – had played a major hand. Alfredo repents and acknowledges his mistakes and his contrition is convincing in the last scene.

Both male singers had their very fine moments. Pop excelled in his duets with Mosuc and in his Dei Miei Bollenti Spiriti, which the plot later makes too bollenti in the second party scene. Giossi, on the other hand, started off as a father convinced that social conventions made it imperative for him to bring about Violetta’s separation from his son.

The long scene with Violetta fully revealed the contrasting characters of the two. There was no lack of sincerity and feeling in Giossi’s Pura Siccome un Angelo or in the pouring out his feelings to his son in Di Provenza il Mar… il Suol.

The all-round definition of the characters interpreted by this gifted trio of singers was bound to guarantee a successful and extremely high-level performance that makes the Aurora and the whole country very proud indeed.

Of course, the production would not have been successful without Novella Tabili’s slick artistic direction.

Regarding the latter, I have just one little gripe. Fine, the windowless backdrop signified Violetta’s entrapment, while the distorted mirrors seemed to reflect ephemeral pleasure and useless vanity. Still, a more rustic appearance could have been given to the second scene and more deca-dence to Violetta’s chamber in her final hours.

So did the very well-trained, fine-sounding Aurora Opera Chorus, the costumes, lighting and Felix Busuttil’s choreography and dancers in the second party scene.

Crowning it all was a Malta Philharmonic Orchestra on very top form under Colin Attard’s direction whose stature as an opera director continues growing.