Today the Catholic Church celebrates a major feast day ‒ the Assumption of Our Lady, which commemorates the bodily taking up of the Virgin Mary into Heaven at the end of her earthly life.

Many Maltese parishes are dedicated to the Assumption, indicating widespread devotion towards Our Lady on our islands.

“The Church has always considered Mary a Christian model. Her life should serve as an inspiration to all,” Fr Sebastian Caruana, the archpriest of Mosta, said.

“Mary should, however, be the means through which we reach God. That’s true devotion. Her last few words in the Bible [at the Marriage in Cana], in fact, are: ‘Do whatever He tells you’.” 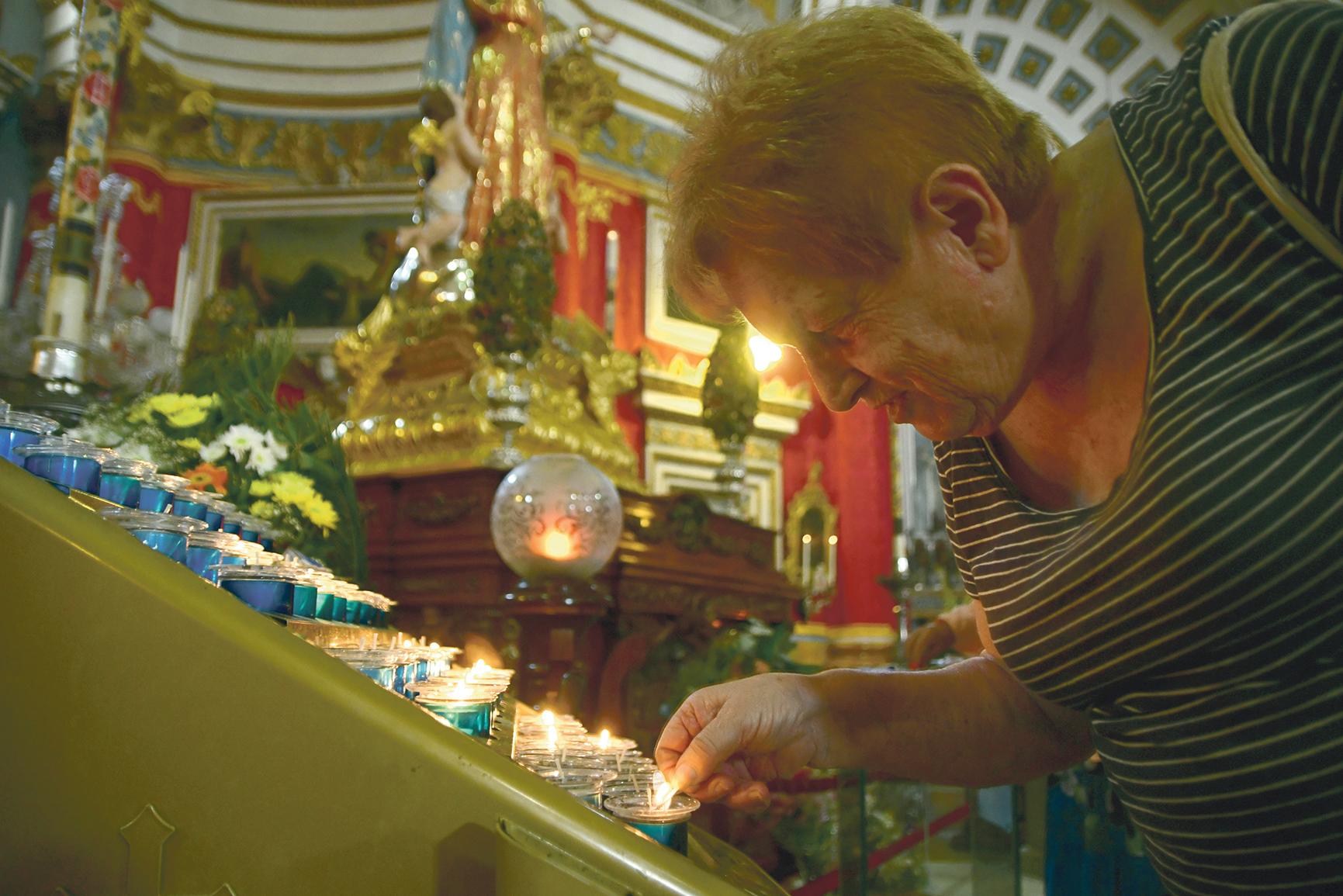 A parishioner lighting a candle in front of the titular statue.

Fr Caruana says that the fact that many local parishes and old chapels scattered around the islands are dedicated to Our Lady is proof that the Maltese have long been devoted to the Mother of Jesus.

Mosta, the largest parish dedicated to the Assumption, has a number of chapels dedicated to St Mary, such as those of Our Lady of Hope and the Immaculate Conception.

“These prove that our forefathers had a special bond with Mary,” Fr Caruana noted.

The old Mosta church, which was built in around 1614, was also dedicated to the Assumption. When an enemy bomb hit the current church (the rotunda built in the 19th century) on April 9, 1942, where some 300 people were gathered for Mass, without detonating, the event was interpreted as a miracle. 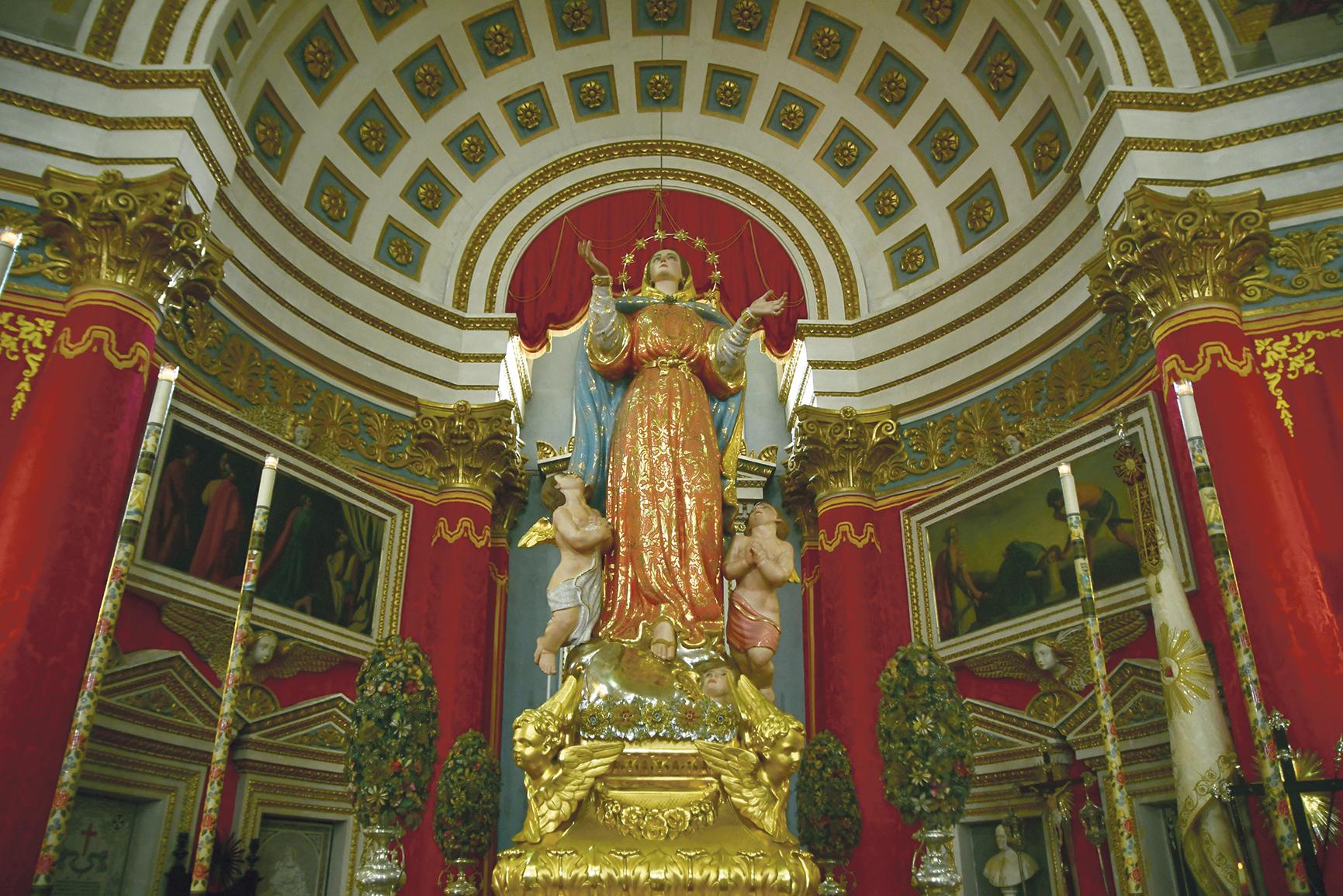 Mosta’s titular statue of the Assumption was sculpted by Salvatore Dimech (1804-1886) but was completely transformed by artist Vincent Apap in 1947.

“This could have helped augment Marian devotion among parishioners and throughout the nation,” the archpriest pointed out.

Times have definitely changed since then, but Fr Caruana finds it difficult to say whether Marian devotion has waned over the years.

Paintings, images, sculptures should only serve as reminders of our faith

“You cannot measure devotion. I’m not impressed, for example, when many attend the Our Lady of Sorrows procession because you have many true devotees who do not attend for some reason or other. Also, I meet many people who say they recite the rosary every day. The most important thing, however, is that these do not remain simply external rituals but become truly spiritual experiences,” Fr Caruana remarked. 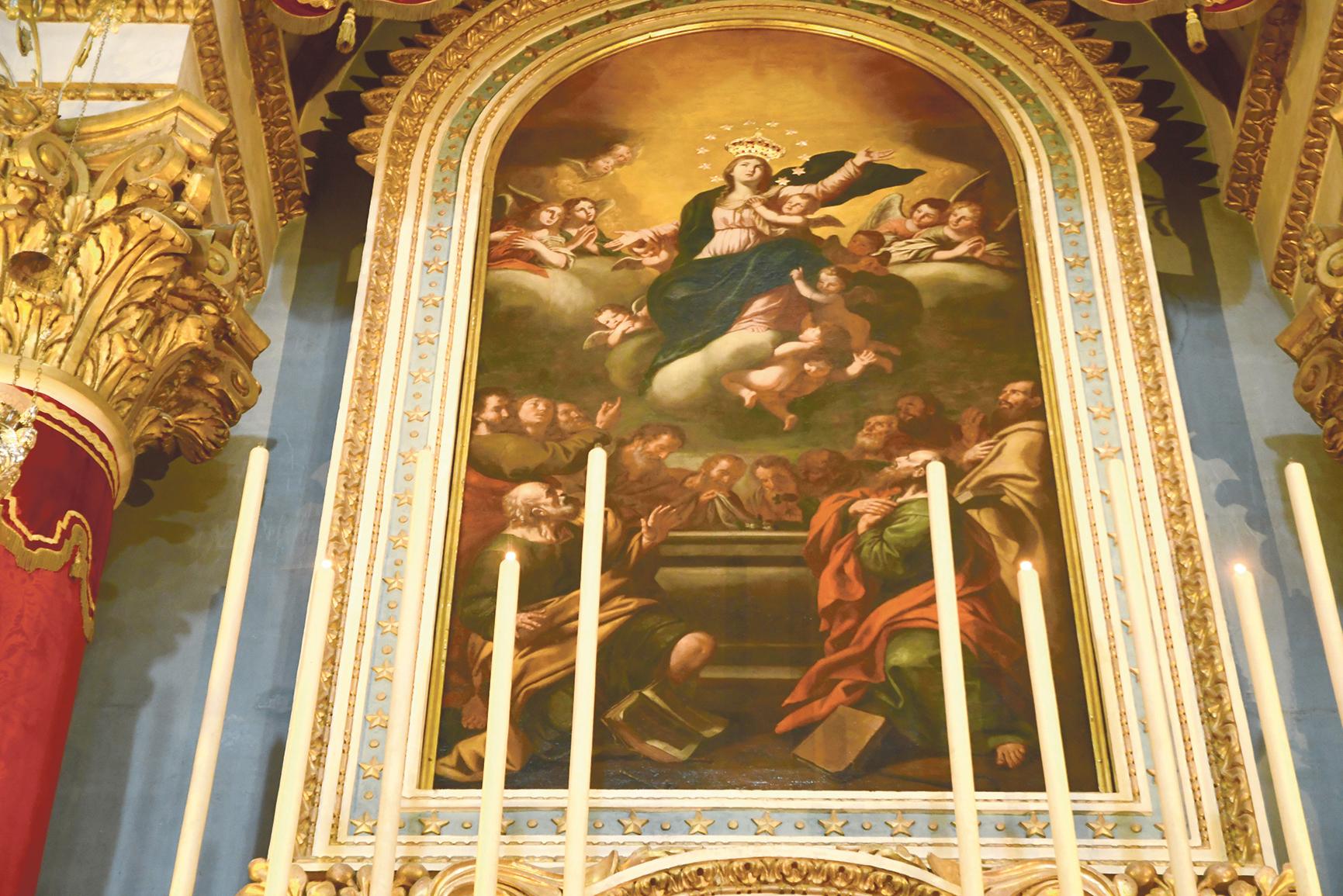 The titular painting of the Assumption of Our Lady by Stefano Erardi.

Also, devotion does not have anything to do with religious imagery.

“Devotion does not mean adoring statues… the Church is against idolatry. They are only there to help us remember. Paintings, images, sculptures should only serve as reminders of our faith,” he said.

“Sometimes we need them. For example, we keep photos of people important to us not because we need to but because they somehow help us to feel close to the person in the photo. The same goes for sacred art,” he added. 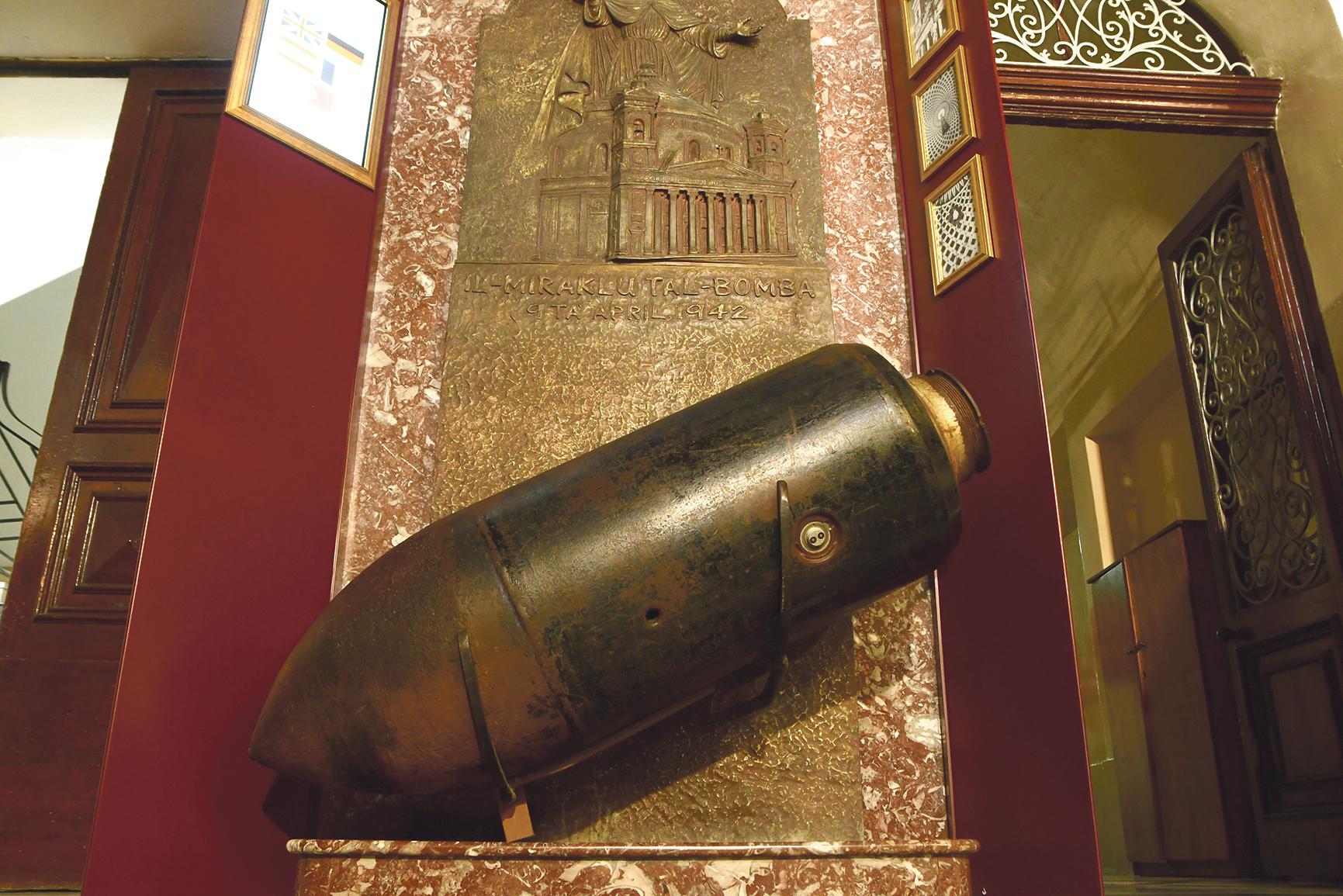 A replica of the bomb that hit the rotunda on April 9, 1942, without detonating, is found in the church’s museum.

As regards feasts, the archpriest considers them to be social events that are deeply rooted in Maltese culture.

“Like it or not, feasts are external celebrations although some community members  do attach more importance to the spiritual side,” he noted.

In a bid to focus more on this latter aspect, the parish annually chooses a theme in the run-up to the festa, with this year’s being the beauty and dignity of mankind. Various activities are held in relation to this theme and the feast’s programme includes a daily reflection which families can ponder on and discuss at home.

“Oftentimes, we tend to place more value on work, money and achievements than on our own well-being. These small passages may help us to stop and think, not only about us but about all the members of the community, including the sick, politicians and the unborn,” Fr Caruana remarked.

Today, the liturgical celebrations will reach a peak at the Mosta basilica with Pontifical Mass led by Archbishop Charles Scicluna at 9.15am. The procession with the titular statue will start at 6.45pm.

Besides Mosta, Għaxaq, Gudja, Qrendi, Mqabba, Attard, Victoria and the community of Ħal Muxi in Żebbuġ, Malta, are also marking the feast today, while Dingli and Mġarr, Malta, will be celebrating on Sunday. 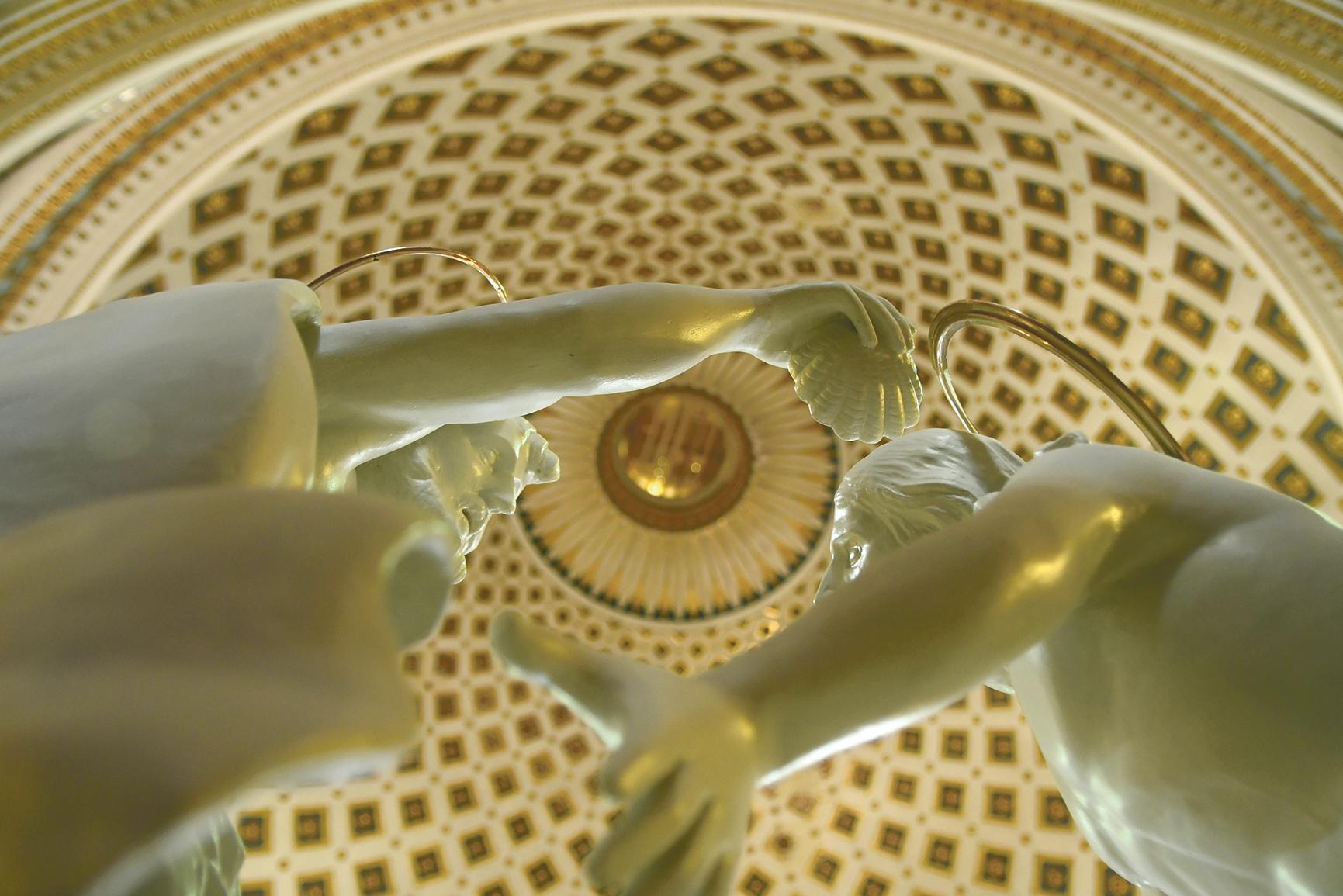 The Mosta rotunda was built between 1833 and the 1860s to neoclassical designs by Giorgio Grognet de Vassé. Photos: Jonathan Borg