Leanne Ellul’s novel about anorexia, Gramma, won the Novel for Youth Prize. She tells Veronica Stivala that young adults, for whom the novel is written, should be challenged by what they read.

Leanne Ellul has been, and still is, in a long-term relationship with writing. When she was younger she loved scribbling lyrics, writing poems on different occasions such as birthdays, scripting plays for classroom activities.

While she has engaged in different forms of art, be it singing, dancing, playing the piano or the guitar, she always went back to writing.

Leanne’s pertinent writing recently landed her with the Novel for Youth Prize for her novel for teenagers – Gramma. This is the story of an anorexic teenage girl and her first-person-narration of the journey, as she loses weight dramatically but is in denial about it and keeps obsessing about how horribly fat she is, even as those around her make it obvious that she’s becoming sickly thin.

Her boyfriend dumps her because she’s so thin; her parents worry and tackle it in the wrong way, presumably not knowing how to go about it. Her grandmother tries to help by sneaking chocolates and biscuits into her bags. She ends up hospitalised and the book ends with the onset of a positive journey out of the tunnel.

In addition to the topic being one that strikes home to many teenagers, what also makes the novel poignant is its narrative style. The story features a different voice: the protagonist Analiża’s alter ego – the anorexia itself, as it were – who is speaking to her constantly. Her alter ego is constantly badgering Analiża and making her feel guilty about thinking of food and calling her fat.

“Writing is about reading a lot, but also writing a lot and being wise enough to discard a lot too, attending workshops, listening to talks and getting involved in seminars,” Leanne says. “For the past couple of years I tried to hone my skills as much as I could, although I must admit I haven’t even begun to scratch the surface.”

The idea for Gramma, she reveals, had been nudging her for a number of years although she kept putting it off. When she started teaching secondary school students, she felt a greater urge to write for that age group.

“Once, during the yearly exams period,” she remembers, “I was convinced that it was about time I wrote about the topic. Bored as I was correcting endless piles of essays, I put pen to paper.”

Topics such as eating disorders, cyber bullying and contraception are ones that must be addressed in contemporary literature

Although anorexia features throughout the novel, it is not only about anorexia. It is a novel about actions and reactions, consequences, perseverance, perspective, solitude, life, laughs, companionship. “The teenage years are a delicate period in life, but then again, not as delicate as they may seem,” Leanne points out. “Young adults can face up to challenging writing. I believe young adults should be challenged by what they read.”

Through Gramma, Leanne wanted to experiment with both rhythm and theme. While her intended audience is teenagers – because most of the characters are teenagers themselves – she believes an adult could read it and connect to the characters just as much. 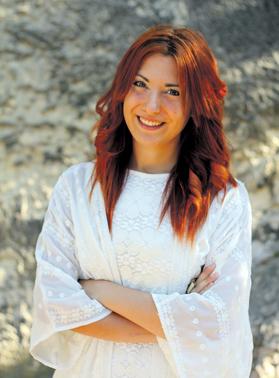 “By reading this book, I believe young adults will be faced with some sensitive issues, but they still would not be biting into more than they could chew (pun intended),” she says.

Topics such as eating disorders, cyber bullying and contraception are ones that must be addressed in contemporary literature, says Leanne, who notes how these would not have been tackled a few years ago.

These, she underlines, can be tackled in young people’s literature, as much as in literature intended for older audiences.

“It all depends on the perspective the writer adopts. Literature, I believe, is not there to educate people as much as to make them ask even more questions. A little bit of humour (be it dry, anecdotal, hyperbolic, ironic and so on), whatever the subject may be, might work magic in engaging young readers too,” she comments.

Leanne has a very positive attitude towards reading, even though she is well-aware that the Maltese do not read much. She quotes the proverb that “If the mountain won’t come to Muhammad, then Muhammad must go to the mountain”, to make her point that all of us should feel the responsibility to promote reading – in whatever form, genre or language that may be.

As an example, she refers to author Immanuel Mifsud, whose reading sessions are always jam-packed with people wanting to listen to poetry. “I believe people should be tantalised by such readings, be given a taste of literature to make them want to read more, seek more. Projects such as the bus shelter poetry should be extended.”

We should lead by example, she points out: “Teachers, being a constant reference point, all need to practice what they preach. They also need to read young adult fiction/nonfiction to be able to suggest good books.”

The Novels for Youth Prize consisted of €1,000. While this is admittedly not the greatest sum of money, Leanne says this helps make a point:

“I have heard of numerous occasions where artists were not valued for their worth and literature is a typical case in point. A lot of people expect a writer to be almost a promoter; to give away free samples, be it stories, talks or readings. Being given a cash prize is, in a way, a payment for all the research and work the writer would have gone through.”

For Leanne, who is also a student, the money means a lot. Also, this year, Stephen Lughermo (the other winner of the prize) and Leanne were given the opportunity to go the Iceland Writers’ Retreat – an enriching experience that money can’t buy, but also a good excuse to invest in Icelandic books.

After finishing her Master’s degree, Leanne plans to engage in more creative writing. She is still writing primary textbooks together with Clare Azzopardi for Merlin Publishers. And she, too, is practising what she preaches and is planning on having a couple of readings of Gramma.

Leanne also forms part of an initiative that promotes writing: KUL - Kit Azzopardi and Leanne, together with Andrew Schembri, will be presenting a project at children’s festival ŻiguŻajg in November. She has also started to write another novel for youths – but, she says, it’s a long road ahead.

The Novel for Youth Prize is organised by the Malta Book Council as part of the National Book Festival.