The story of a legendary pilot and a woman who came to Malta to work as an entertainer will be retold at the same place where she soared to stardom 75 years ago: Valletta. 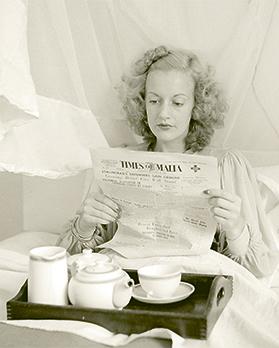 Christina Ratcliffe first landed at the Morning Star in St Nicholas Street, Valletta, in the late 1930s as a cabaret performer, a visit that was followed by another in 1940, which coincided with Italy’s war declaration on Britain.

Ms Ratcliffe’s return home was delayed, so she joined a troupe that toured barracks and gun sites, among other spots, entertaining the troops. As the war raged on, she enrolled as a civilian plotter in the Operations Room at Lascaris.

But the ongoing atrocities did not dampen aspirations of love for the young woman, and she soon grew fond of Adrian Warburton, a fearless photo-reconnaissance pilot serving with the RAF in Malta.

It was several years after Mr Warburton had died that aviation enthusiast Frederick Galea learnt about him and, in turn, about Ms Ratcliffe. He has since penned a book called Carve Malta on my heart, which features Ms Ratcliffe, among other figures.

It was through his keen interest in World War II events and aviation that Mr Galea learnt about Mr Warburton and, eventually, his meeting with Ms Ratcliffe.

As the war raged on, she enrolled as a civilian plotter in the Operations Room at Lascaris

Mr Galea told this newspaper that Ms Ratcliffe, who was later decorated for her contributions to the war effort, originally planned to leave the island in June of 1940. However, when she met Mr Warburton, it was a case of love at first sight, and she abandoned any plans she may have had to return to her fiancé in Tunis.

Sadly, Mr Warburton was killed in action over Germany on April 12, 1944.

Mr Galea noted that after the end of hostilities, Ms Ratcliffe chose to spend the rest of her life in Malta, the island she grew to love, and passed away here in the 1980s.

During her time on the island, the English newspaper The Star carried a five-part article penned by Ms Ratcliffe herself on her wartime experience in Malta, called ‘One woman goes to war’. In 1974, the Maltese newspaper Malta News expanded this story, under the heading ‘Carve Malta on my heart’, in a series of 15 parts. 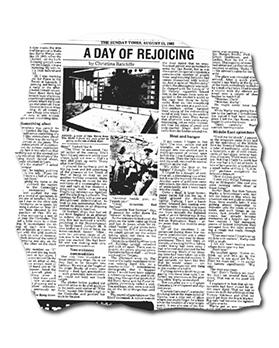 Ms Ratcliffe wrote for The Sunday Times of Malta, including this article in 1982.

The show will be presented at The Splendid in Strait Street, Valletta on April 4, 5 and 6 by Strada Stretta Concept (under artistic director Giuseppe Schembri Bonaci) and is produced under the auspices of The Valletta 2018 Foundation.

The play is presented in collaboration with the 2017 Maltese presidency of the Council of the European Union, and the producers have acknowledged the assistance of Fondazzjoni Wirt Artna, the Arts Council Malta, The Malta Film Commission and Mr Galea.

More information is available via straitstreetart@gmail.com or the Facebook page called The Strada Stretta Concept.