To the vast majority of the Maltese population, the epic power struggles between the expansionist Russia of the Czars and the waning Ottoman empire held little interest and less relevance. In the 1820s, after its artificial heyday in the Napoleonic wars, Malta was going through a tragic period of social and economic depression, with rampant poverty. Malta hit visitors as the most destitute country in the whole of Europe. 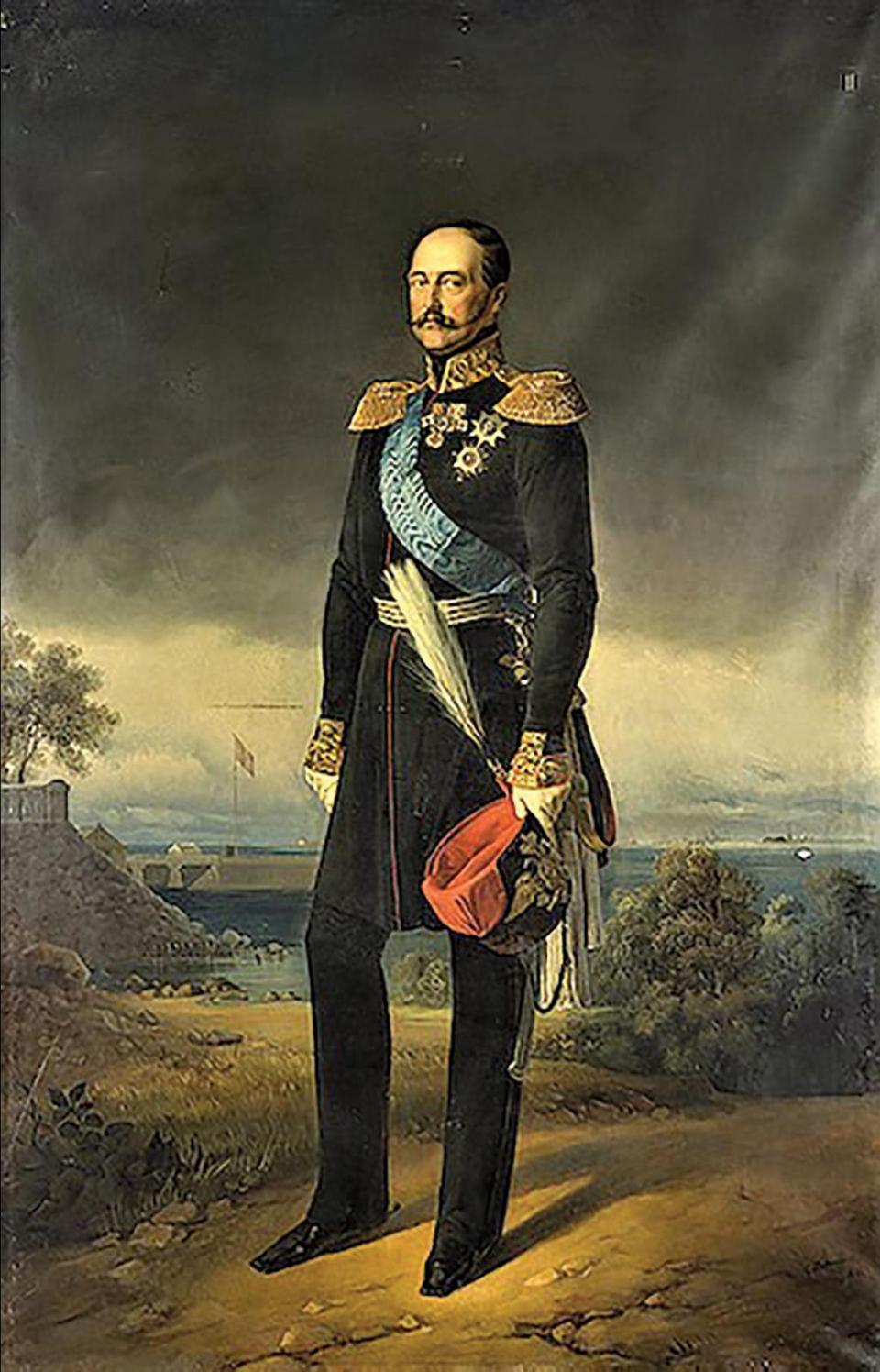 The Czar of Russia, Emperor Nicholas I in a painting by Egor Botman.

The world-traveller Charles Rockwell, appalled at what he saw in Malta, observed: “Never have I seen elsewhere so much squalid wretchedness, beggary and woe everywhere one meets in Malta” (Sketches of Foreign Travel, Boston, 1842, p. 119).

The bruised egos of Czar Nicholas I of all the Russias and the Ottoman Sultan Mahmud II  enjoyed no priority at all in the world view of the Maltese. Not when the head of the household had no idea where the next meal for his starving family was coming from − “the poverty of the inhabitants had become extreme”.

The Battle of Navarino in 1827 disturbed that indifference, if only slightly. The joint fleets of Britain, France and Russia had, in October, decisively defeated the Ottoman and Egyptian naval armada in the last big sea battle fought exclusively with sailing ships. That victory hastened the successful outcome of the Greek struggle for independence from Turkey. On their return from the east, the three victorious fleets stopped to refurnish and celebrate in Grand Harbour: “The presence of numerous men of war put much money in circulation” (Albert V. Laferla, British Malta, Volume 1, Malta, 1976, p. 116). Malta, had once again, profited from the deaths and misfortunes of others. 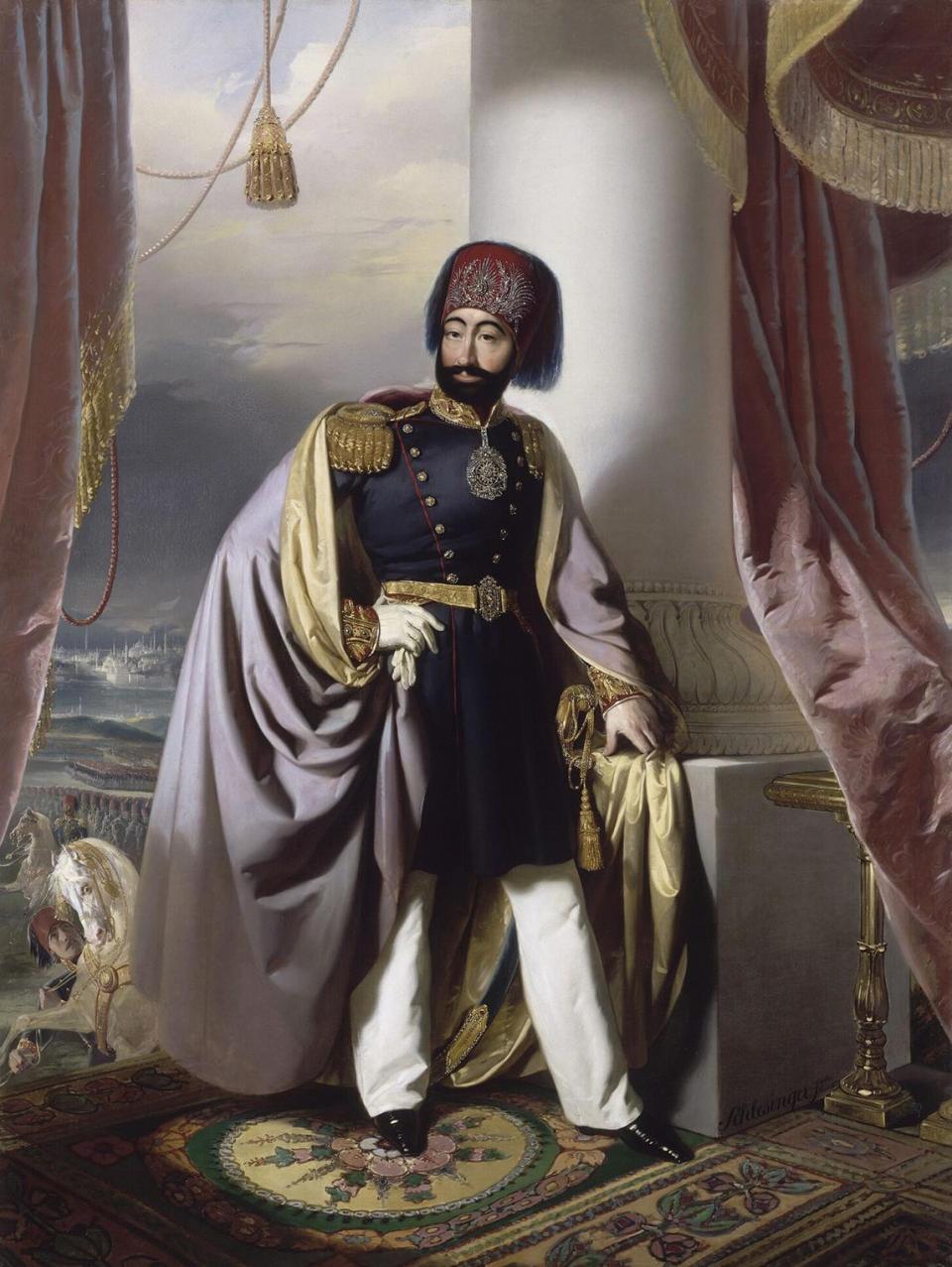 The Sultan of the Ottoman Empire, Mahmud II, as portrayed by Henry-Guillaume Schlesinger.

The fragile peace arrangements after the Battle of Navarino did not endure long. The following year, Russia and Turkey were again at each other’s throat in a full-blown war. Malta found itself playing a significant role in this conflict, supplying the Russian fleet with victuals and other necessities. I have identified two key players in this chain of goods and services which attracted desperate­ly needed cash to the islands.

The first is the Maltese merchant Antonio Regnaud Carcas. I managed to find out some bits and pieces about him. Though always referred to as Maltese, a Google search will bring up seve­ral Regnaud Carcas in Italy. He first appears in business activities as agent in Malta “of Greek export merchants” at the tail end of the Knights’ rule (John Debono, Trade and Port Activity in Malta 1750-1800, Malta, 2000, p. 81, 87).

His break came in September 21, 1806, when Czar Nicholas I by decree established the very first Russian consulate in Malta “to give necessary assistance and protection to those of our subjects who go there for commerce and other industries”. 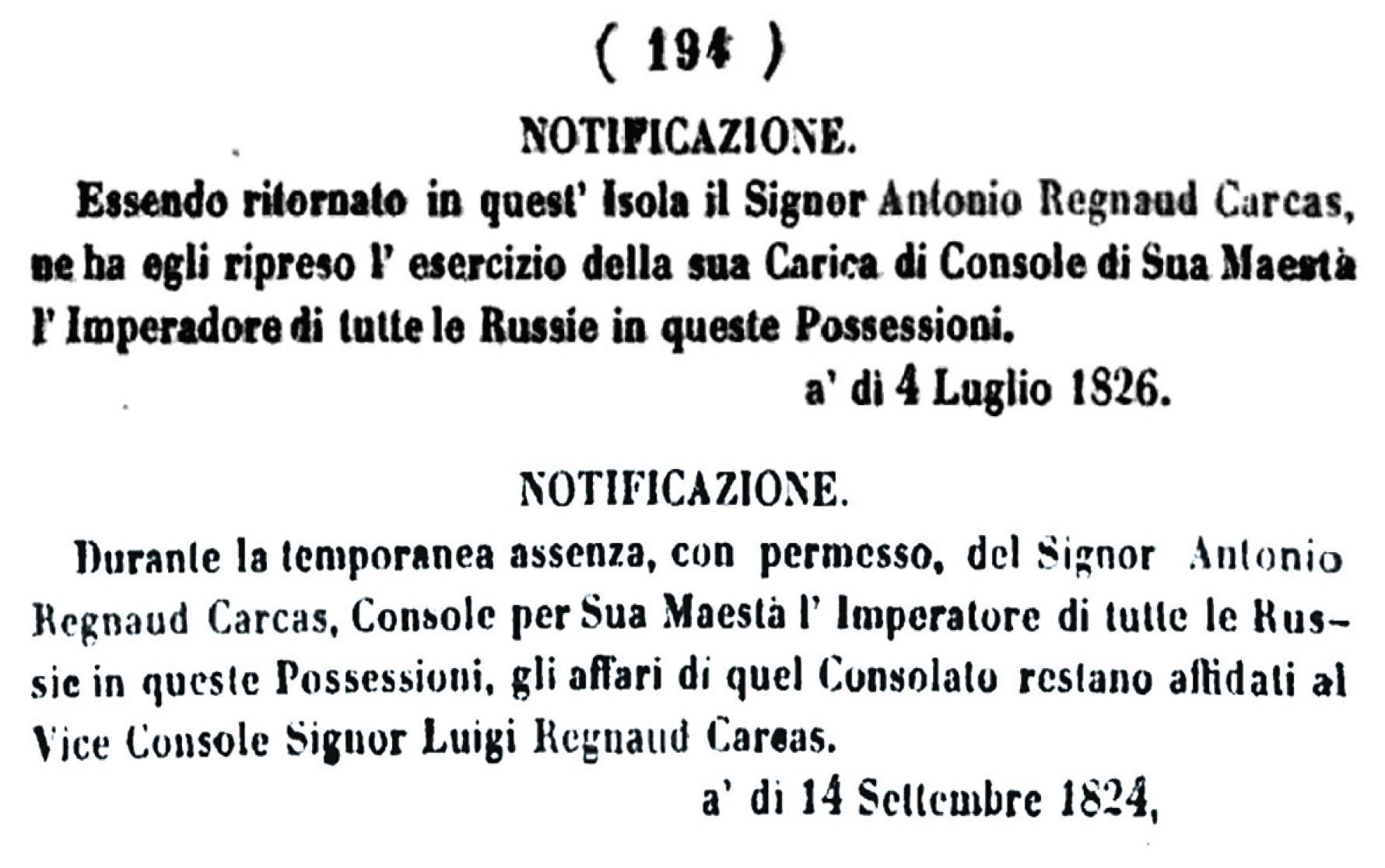 The Czar appointed Antonio Regnaud Carcas as the first Russian consul for Malta. In 1814, the poet Ludovico Mifsud Tommasi, still a divinity student, dedicated some verses in Italian to the Russian consul Regnaud Carcas in praise of the Czar (Elizaveta Zolina, Malta and Russia, A Journey Through the Centuries, Malta, 2002, p. 266-267).

During the British period, Regnaud Carcas sometimes appears in the consular notices in the Government Gazette to advise he is temporarily releasing his duties in favour of Luigi Regnaud Carcas due to his being away from the island, such as a rather long absence between September 1824 and September 1826 (Repertorio di Proclami, Ordinanze, Notificazioni, Vol. 1, Malta, 1844, p. 187-198). The protests related to his Bills of Exchanges give his address as St Ursula Street, Valletta. 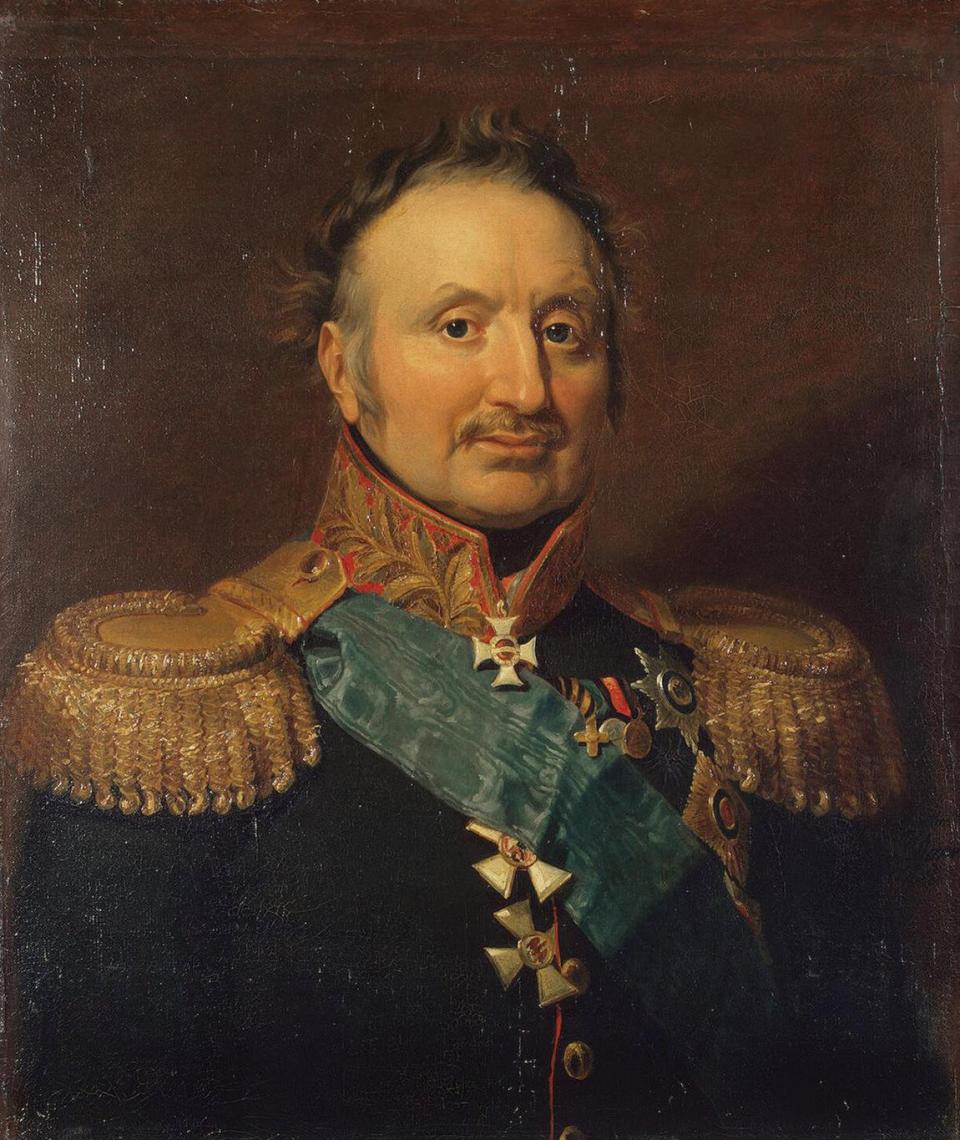 General Peter Wittgenstein, first commander-in-chief of the Russian forces in the 1828-1829 war.

Going by official records, the consul’s life must have been quite uncolourful. The only ‘personal’ episode to survive in the archives refers to his legal threat to sue his son for fraud.

Antonio had ordered from his son, Paolo, 15 dozen bottles of champagne and paid him 450 scudi by means of a Bill of Exchange. When he counted the bottles delivered, he found 52 missing, so he claimed 130.5 scudi discount from the Bill of Exchange. On October 4, 1828, Antonio trudged to British notary Charles Curry to register a formal judicial protest against his son (Notarial Archives, Records of Notary Charles Curry, R 197. 4. Oct 1828, 121).

Are Antonio Regnaud Carcas and Antoine Regnaud one and the same person? If they are, he actively collaborated with the French after Napoleon’s capture of Malta and the French blockade from 1798 to 1800.

Regnaud is said to have formed part of the new French government of Malta with the title of commissioner, equivalent to cabinet minister. The records mention him as taking a prominent part in publicly humiliating his fellow commissioner, Mgr Francesco Saverio Caruana, the wealthiest cotton merchant of Malta, then pro-French but later a leading pro-British stooge. 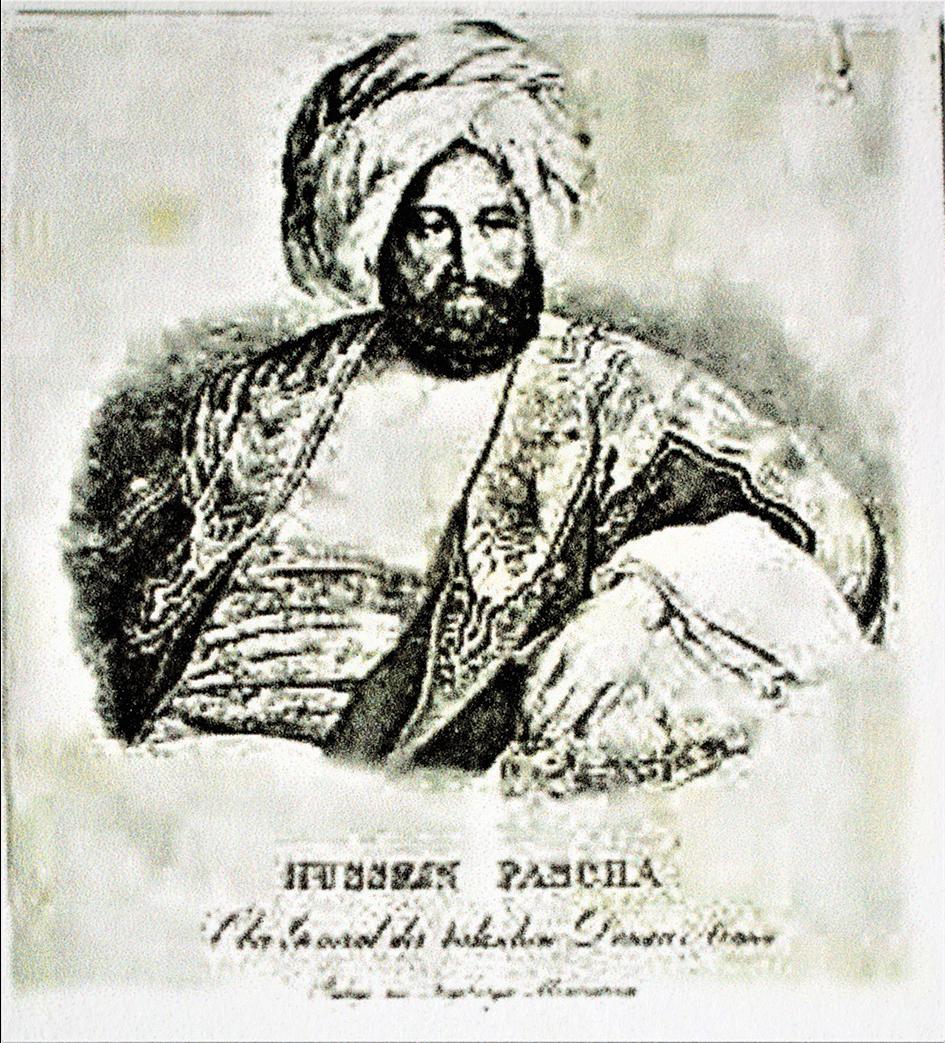 General Agha Hussain Pasha, commander-in-chief of the Ottoman forces in the Russian-Turkish War.

In open Council, Regnaud “treated Caruana as a schoolboy” and this hastened Caruana’s conversion to the enemy (but maybe this is a historian’s mix-up with Regnaud d’Angely).

Regnaud is mentioned again later as the person entrusted to repay the French consul in Tunis the sum of 2,855 scudi, disbursed by the latter to redeem 66 Maltese slaves held in Tunisia (Carmel Testa, The French in Malta, Malta, 1997, p. 262, p. 414.).

The Regnaud Carcas name continued to appear in commercial litigation in the Maltese courts throughout the 19th century.

Part 2 of this article will be published tomorrow.

This article would not have been possible without the copious and generous input by Anthony Mifsud from the Notarial Archives and Maria Voeikova from St Petersburg. My immense gratitude.