The Joannes Gennadius Maltese treasure trove in Athens
with contributions by Arnold Cassola, Giovanni Bonello, William Zammit, and Theresa Vella. Published by Malta University Press, Malta 2019, €80 from all major bookshops in the islands. 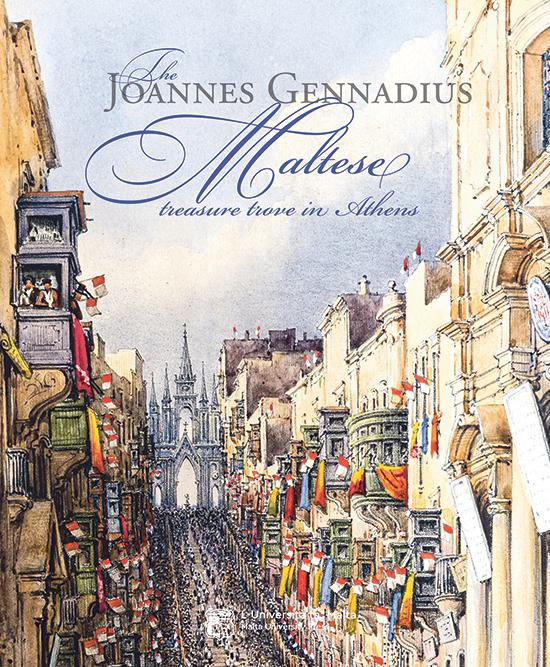 The serendipitous discovery by Arnold Cassola of a cache of Malta-related material in the Gennadius Library of the American School of Classical Studies in Athens is indeed a most significant one for lovers of Melitensia. While providing several hitherto unseen watercolours and photographs of the island in the nineteenth century as well as copies of rare books, the discovery is proof that research is a pleasant ongoing experience and that one cannot tell when and where relevant material can turn up.

Joannes Gennadius (1844-1932), was a diplomat who rose to the post of Greek ambassador to the court of St James. He studied for a couple of years at the English Protestant College at St Julian’s following the trend of the leading Anglophile Athenian families. It was probably this connection which more than anything made the collector Gennadius take a special interest in Malta-related items, even though these form a miniscule part of the 26,000 volumes he donated to the Gennadeion, which has become one of the most important libraries in Greece, with over 110,000 volumes on Greek history, literature and art from antiquity to modern times.

Arnold Cassola’s name is also associated with three other important cultural discoveries: the earliest dictionary of the Maltese language, the Ottoman campaign registers of the siege of 1565 and a unique copy of Francesco Vella’s 1840 Tahdit Hafif u Morali.

The Athens library holds 116 volumes of scrapbooks which Gennadius put together throughout his long life, two of which include material of Maltese interest. These include photographs, black-and-white and coloured watercolours, portraits, facsimiles, maps, publications, genealogies, and lithographs.

The book also contains three other studies by well-known scholars which explain in detail the value of this unexpected discovery.

Giovanni Bonello analyses the Malta-themed photographs and comes out with invaluable insights. The collection consists of 46 photographs dating back to the late 1850s when Gennadius was studying in St Julian’s and which he presumably acquired during his short stay. Most of them consist of views around Valletta and its harbours, but there are others taken in such places as Vittoriosa, Cospicua, St George’s Bay and Mosta, as well as views of the uncompleted Mosta rotunda. 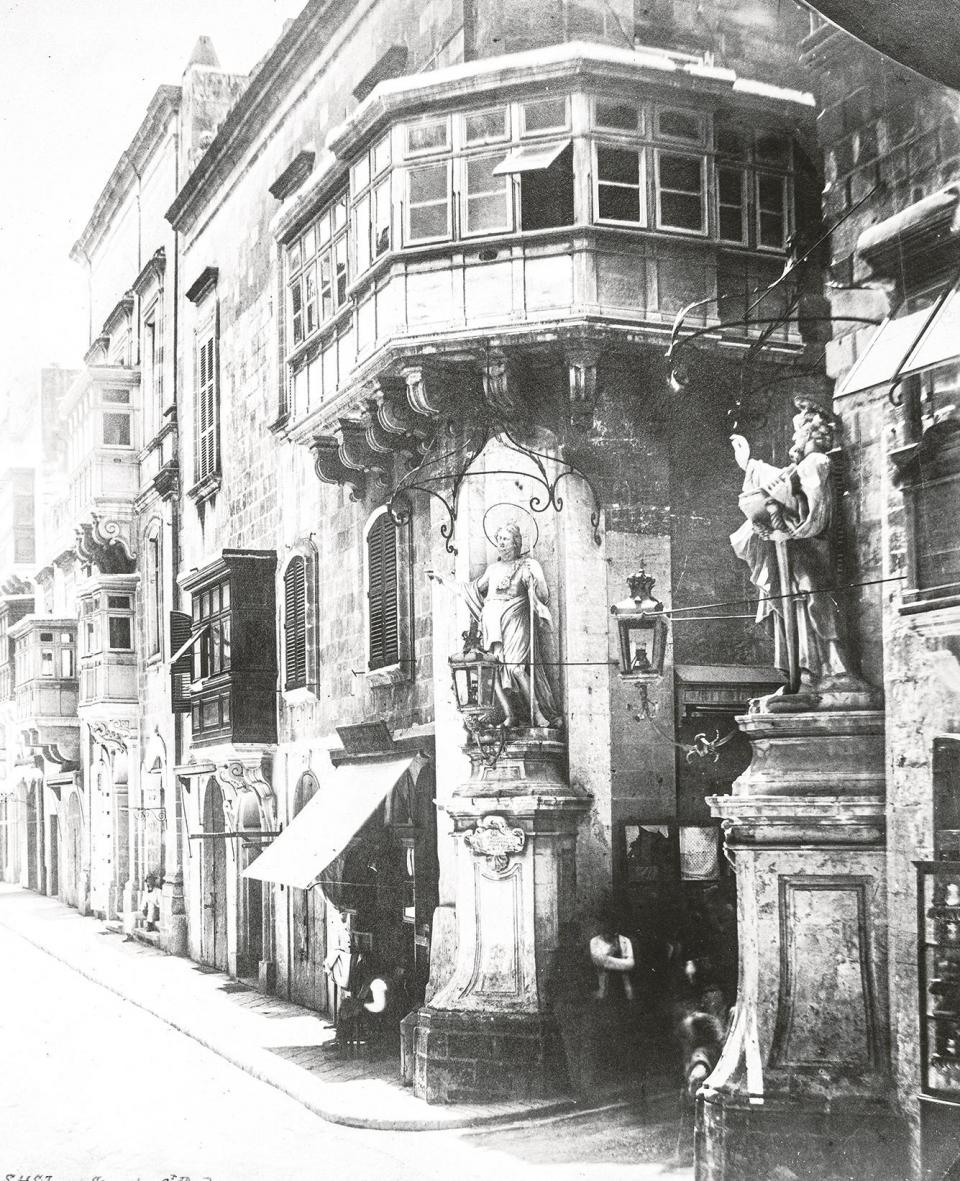 Bonello believes that most of the photographs were taken by “two of the giant pioneers of photography” James Robertson and Felice Beato (what a name!) who were working as a partnership locally at that time. He bases his conclusion on his expert knowledge of 19th century photography and its technicalities. Some photographs feature (the same?) gentleman posing in a central position. Could he have been one of the partners? A few others could have been taken by other photographers then working in Malta, like Robert Murray and James Francis Dunlop.

Bonello asserts that the Gennadius photographs, while filling “gaps of the visual panorama of the island” are proof of “Malta’s high ranking in the standard of photographic expertise”.

William Zammit analyses the printed works in the collection and is especially enthusiastic about the “lesser-known, rare, or extremely rare Melitensia pamphlets, and single sheet and cartographic material”.

These pamphlets, which are extremely scarce, a number of which do not seem to be found locally in either public or private collections,  particularly excite Dr Zammit’s interest. There are also many Greek volumes printed at the missionary presses of Malta 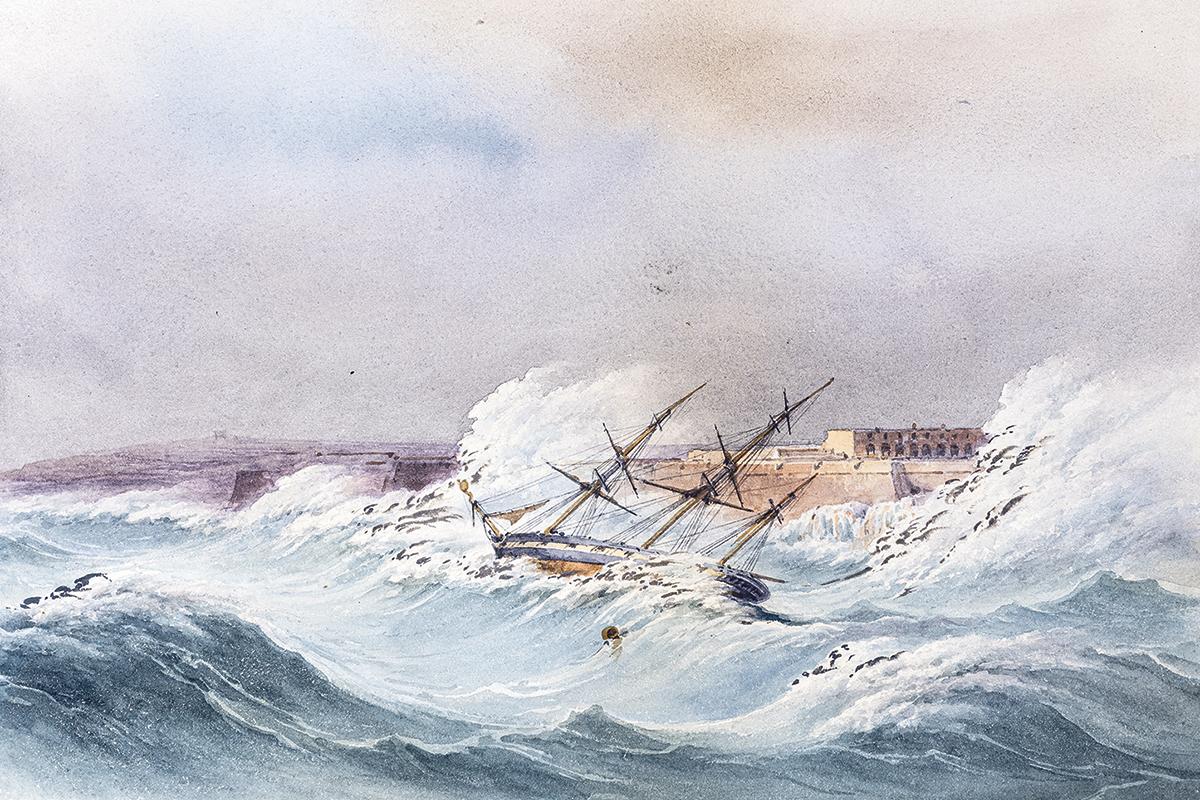 The bibliographic material can be divided into sections referring to military and naval engagements: 16th to 18th century works, nineteenth century works, Greece-related Malta imprints, maps, plans and other illustrations. These works are dutifully listed and briefly explained.

The Gennadius trove also features ten watercolours and one lithograph which have been studied by art historian Theresa Vella who analyses them stylistically and attempts attributions.

Nine of the 11 views show marine aspects, perhaps belying the fascination of the typical Mediterranean man with the sea. Although the scenes are different in technique and mood, Vella believes that they are by the same hand, possibly one of the Schranz artists, probably Giovanni.

Images include three soft-focus watercolours, which are excellent examples of the artist’s most competent draughtsmanship, and resemble the quality of a sepia photograph. The delightfully precise depiction of Wignacourt’s water tower in Floriana is particularly striking, while that of the inner reaches of the Grand Harbour from Corradino is a scene of paradisiacal serenity before the upheaval of the Industrial Revolution.

The other four watercolours show the Grand Harbour in raging earth-swallowing gregale storms, a dramatic subject so loved by the Schranzes.

Still the most eye-catching of the prints is surely the depiction of St Paul Street en fête, with the statue of the saint making its way under the triumphal arch erected near the former Strickland House on February 10 1858 for the centennial celebrations.

It’s a sheer feast of Catholic pageantry with coloured flags (with the Maltese flag showing the white on the fly) on every gallarija, and hundreds of people lining the street.

Beautifully produced, The Joannes Gennadius Maltese treasure trove in Athens is a sheer pleasure to leaf through and read and will be a smart addition to all Melitensia collections.