More and more homegrown rappers are emerging in Malta. Now that hip hop and rap have been around for a few decades, its seeds have taken root in some young local musicians who are learning to use their mouth as their instrument, and sometimes even as a weapon.

Ever since Hooligan hit the scene in 2002, aspiring lyricists have seen rap as a more accessible form of expression and, 15 years later, the next generation of Maltese rappers are releasing music week by week, with some like Chris Birdd even going abroad to promote their raps.

A Maltese crew that has been ma­king its name known over the past few years is the Soul Movement gang. Soul Movement is a loose-knit group of rappers and producers working together to make good music, and one of their most pro­minent members is a young rapper who goes by the name of CJ.

CJ Cordina, 21, from Ħamrun, has been working the local circuit for a few years now, performing live and collaborating with various rappers and producers, even releasing a couple of videos. But he is finally ready to release his first mixtape, Transcendence. In it, CJ combines all the things that make him unique, and brings all his influences together with his life ethos to make his first proper foray into releasing his music.

Learning from those who came before him, CJ’s inspiration and vision are clear. “I grew up listening to MCs that stood up for the people and tried to make a difference on this planet,” he says. “Somehow it changed my life and, thanks to their music, I am who I am today. And I wish to do the same now, I want to show people a different way of living where they can live life to the full and show their true colours.”

CJ’s been recording himself rapping for a few years now. “By the age of 14 I had started writing lyrics and I recorded myself on a laptop mic and uploaded my first track. Since then, I knew that this is what I want to do in life and that this is what makes me happy,” he says.

Discussing Soul Movement – a group and also a mission he’s been involved with for over four years – is personal for CJ. “Soul Movement is a very deep concept which cannot be fully explained here in a few words,” he says. “It is also an evolving concept because, as I and my team grow, we continue to learn and adapt to current circumstan­ces. Our actions will always be in the favour of the healthy, growing mind and towards benefiting life on our planet. Our goal is to co-create, cooperate and experience awareness in expression through art, music and culture,” he continues.

“We are a small but growing community that is promoting education and awareness through various aspects in everyday life, whether it be physical/material or emotional/spiritual.’’

Soul Movement and their affiliates promote positi­vity through their music and art, as CJ is aiming through Transcendance. He feels there should be more to modern life and is wary of everyday struggles and pressures pushing you to forget who you really are. 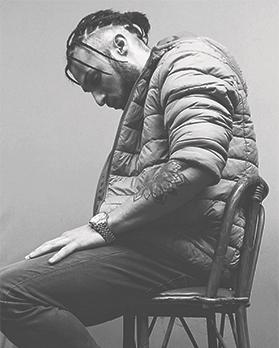 “Living in today’s world may easily detach you from the real meaning of life, thus disconnecting you from you true power,” he explains. “We are so busy working eight hours a day that we accept it as normal and ignore our true purpose. I work eight hours a day myself, sometimes even more to earn some extra money. But that doesn’t stop me from pursuing my goals. I wish everyone can have their experience and go beyond the so-called norm, living life doing what they love.’’

With the release of his debut mixtape, he is clear about what he hopes people will get from his music: “I hope people feel motivated to follow their dreams.’’

In preparation for the album he recently released a video for his single The Link, with production by Bazza Beats. “Bazza Beats is a full-time producer from Amsterdam who is now based in Malta. We made plans to work together and create an album, straight after this mixtape release. The video was filmed and edited by Reuben Testa.’’

His previous video, aptly named Soul Movement, is also a close-up glimpse into this burgeoning Maltese scene. “That was purposely made about the crew, so I guess that hyped us up,” he says.

Apart from collaborating with Bazza Beats, CJ is also excited about another collaboration on the album Skyscrapers, done “with a really talented foreign artist called Mula”.

Skyscrapers joins another six tracks on the mixtape, alongside an intro and outro. “My favourite line can be found in the intro: ‘We’re on a different level, we know it, we don’t abuse it, we re-use it, spread the knowledge round the globe, we’re the movement.’ ”