A jug unearthed at the oldest shipwreck in the central Mediterranean could prove that the Maltese islands were an integral part of the Phoenician trade network.

“To date, we knew that the Phoenicians lived here, because they died here. And to date, our main archaeological sources came from graves,” marine archaeologist Timmy Gambin told The Sunday Times of Malta.

“We now have a ship that was actually leaving the Maltese Islands before it sank off Gozo, because the island was one of its port calls. A shipwreck without any local items could mean that the ship just happened to sink close to Malta during its voyage.”

Confirming the origin of the jug, he said, could place Malta as an integral part of the trading network of the earliest phase of the Phoenician occupation.

The discovery of the Phoenician vessel off Gozo’s northwestern coast more than 2,700 years after it sank, laden with amphorae and grinding stones, made international headlines in 2014.

Spread across a 15-by-four-metre area 110 metres below sea level, there are around two metres of archaeological remains under the seabed, which most probably include wooden remains from the ship.

In July of 2014, the site was surveyed, samples were extracted and a technical team put together 8,000 photographs to create a high-resolution, 3D model of the area. The survey of the shipwreck was carried out within the Groplan Project, which was funded by the French National Research Agency.

We now have a ship that was actually leaving the Maltese Islands before it sank off Gozo, because the island was one of its port calls

But bad weather cut short the 2014 expedition, and after lifting two amph-orae, an urn and a grinding stone from the shipwreck, the team did not manage to carry out a final 3D mapping of the site with the missing samples.

Lacking funding and the necessary equipment, such as a submarine, it was difficult to complete the survey in the following months. So together with a colleague from Finland, Kari Hyttinen, Dr Gambin tested out a manual way of completing the survey on two underwater airplane wrecks.

The trials were successful, so this year, a team of 12 people from the UK, France, Malta, Italy and Finland dived down to the Phoenician shipwreck.

This was the first time ever that archaeologists had dived 110 metres without the help of equipment such as submarines. It took some two hours and 20 minutes for the divers to make it from the shipwreck back to the surface.

Ahead of their dive, the team drew up a list of items that they could recover from the shipwreck to be able to build a better picture of the Phoenician trade routes.

In 2014, Prof Jean Christophe Sourisseau, from Aix-Marseille University, spotted the top of a Phoenician jug among the remains. This made it to the list, together with another grinding stone, which had drawn the interest of Prof Alberto Renzulli, based in Italy.

When they first surveyed the site, apart from seven different types of visible amphorae, the team also discovered around 20 lava stones that were probably used to grind wheat.

It has now been confirmed that a 35-kilogram grinding stone retrieved in 2014 originated from Pantelleria. The type of volcanic rock that it was carved from narrows its origins to one particular spot on the small Italian island.

Meanwhile, it has transpired that the jug spotted by Prof Sourisseau and a large storage container known as a pithos probably originated from Malta. 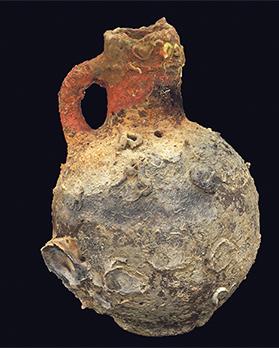 The latter is unique, as its shape has never been documented before anywhere across the globe.

The items that were retrieved from the shipwreck also include amphorae from North Africa and western Sicily, making it the first internationally documented Phoenician vessel with such a mix of objects in its cargo.

Fragments of an amphora were retrieved, and now the archaeologists can test them for any organic remains that could shed light on what they contained 2,700 years ago.

All of these items were recovered from the surface level of the shipwreck, meaning there could be scores of other objects, picked up by the seafarers when the vessel still sailed the Mediterranean Sea andstill buried in the lower levels.

This year’s expedition was filmed by the national broadcaster, in line with a memorandum of understanding with the University of Malta, and a documentary will be aired later on this year.