If there’s one thing that motorists despise more than being stuck in traffic it is driving around desperately looking for a place to park.

But technology may soon take the pain out of parking in Valletta with a mobile phone app that tells users exactly where there’s an available space.

In a pilot project, 100 parking sensors were recently installed in parts of Triq Marsamxett and Triq San Bastjan, otherwise known as the Valletta ring road near Auberge de Bavière.

The sensors are linked to an application, available for both IOS and Android, that allows the user to zoom in on the street on the phone in real time and find out whether there are any parking spots available.

So rather than wandering around the streets looking for that elusive spot, drivers can head straight for the street that has free parking places.

The project is by CVA Technology Company Ltd, the firm that manages the fee-based access scheme to the city using cameras placed at strategic points.

CVA is hoping the system works well enough for the government or the local council to extend it to other streets in the city. 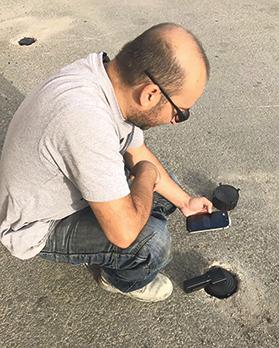 Testing the sensor in Valletta.

CVA operations manager Brian Gatt said studies showed that technologies like this could reduce the time spent looking for parking by 35 to 60 per cent.

The CVA Parking Management Platform was deployed in conjunction with the Spanish WorldSensing Group, the owners of the FastPark solution.

Fastpark is based on individual parking sensors installed in parking bays. The battery-powered sensors are placed beneath the top layer of asphalt and are element and vandal-proof.

They detect changes in light and the magnetic field to determine whether a parking spot is occupied. That information is then relayed to a central gateway using wireless technology.

“CVA evaluated many potential partners before joining forces with the Worldsensing Group,” Mr Gatt told The Sunday Times of Malta. He said that while there were many companies claiming to offer a reliable solution, the reality was quite different.

“Our priority was to identify a solution provider with a product, both in terms of hardware and software, that is tried and tested, and not at prototype or proof of concept stage.

“The production process was also an important consideration, in that we wanted to utilise hardware that underwent rigorous quality control checks which ultimately result in a product that is EU certified.”

The sensors have been tested successfully over the past few weeks. Another town, Qormi, has already installed parking sensors in some of its main streets, but it is only in Valletta so far that they are linked to a mobile phone app complete with a real-time, colour-coded map that shows available parking bays.

When contacted, a spokesman for Transport Malta said the aim was to implement smart parking technologies in various areas around Malta.

“Besides saving time and frustration for drivers, the technology also reduces vehicle emissions,” he said.

Vehicles will spend less time with their engines running looking for parking spots and will stop roaming the streets “hoping for a lucky strike,” he said.

The Valletta pilot will now guide the technical specifications for future implementation of the system across Malta, the spokesman added.