The Ordinary Lives of Women is chiefly concerned with giving visibility to the mundane, expressed in works by nine female artists. Curators ELISE BILLIARD PISANI and MARGERITA PULÈ speak to Lara Zammit about the exhibition and the works on display.

“There are many ways of looking at the ordinary,” begins Elise Billard Pisani, one of the curators of the exhibition The Ordinary Lives of Women currently showing at Spazju Kreattiv.

“One way has to do with how women are sometimes shown in the media. Often when we read and hear about amazing women, this maybe puts the bar a bit too high… not everyone is a heroine,” she maintained, referring to how women’s achievements are often exaggeratedly propped up in the media, at times condescendingly, as though their merits are somehow surprising, or out of the ordinary.

“You don’t need to justify women’s achievements for the sake of equality,” interjected the second curator Margerita Pulè.

In fact, The Ordinary Lives of Women is entirely focused on the everyday experiences of women across the globe, whether in domestic, private or public spaces, reflected in artworks by nine local and international female artists.

“A lot of the works are about transmission,” says Billard Pisani. “This is a theme that is found in many of the pieces.” 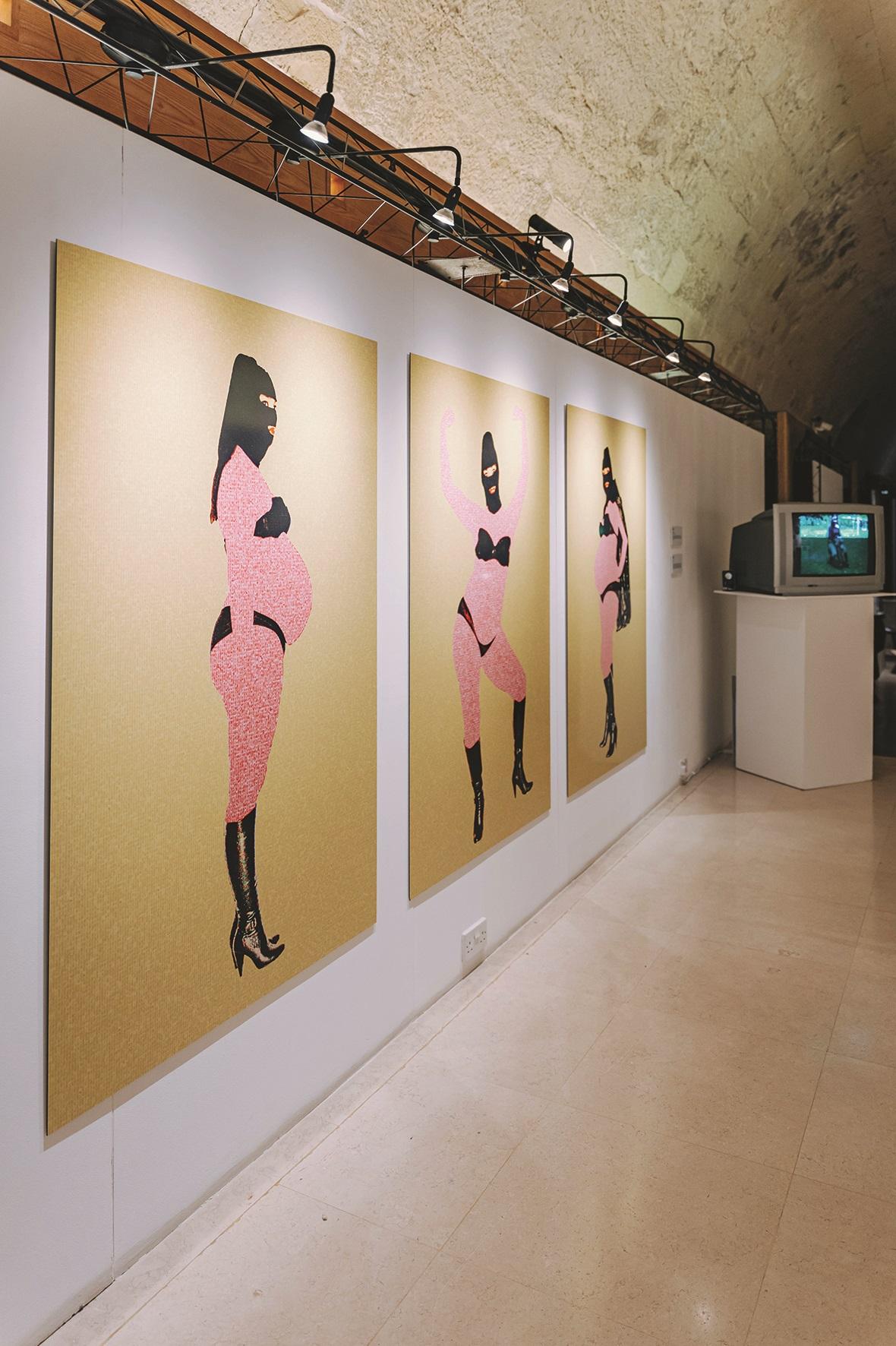 One obvious kind of transmission is motherhood – a element found explicitly or surreptitiously in several of the artworks. Fatima Mazmouz’s works are a case in point. In Mazmouz’s infamous Super Oum series, where a masked pregnant figure is seen in stances not typically associated with pregnant bodies, the artist endeavours to subvert viewers’ preconceptions about the assumed helplessness or fragility of expectant mothers.

The artist also draws attention to the idea that a pregnant woman is simultaneously her own and everybody else’s concern, thus also highlighting a pregnant woman’s lack of autonomy.

Motherhood is also explicitly the focus of Rachel Fallon’s piece in the exhibition, namely her Mother Medals – a set of five sponges fashioned to look like medals based on 20th-century pronatalist honours bestowed on women in totalitarian and fascist regimes.

Being sponges, the association with cleaning (often seen as women’s work) is immediately perceived, but also more broadly the association with care – a motherly duty that extends from the domestic space to the national one – a mother keeping her children alive would be given a medal, but also one whose children die at the service of the state. Mothers transmit biologically through birth, but they also transmit heritage and history. 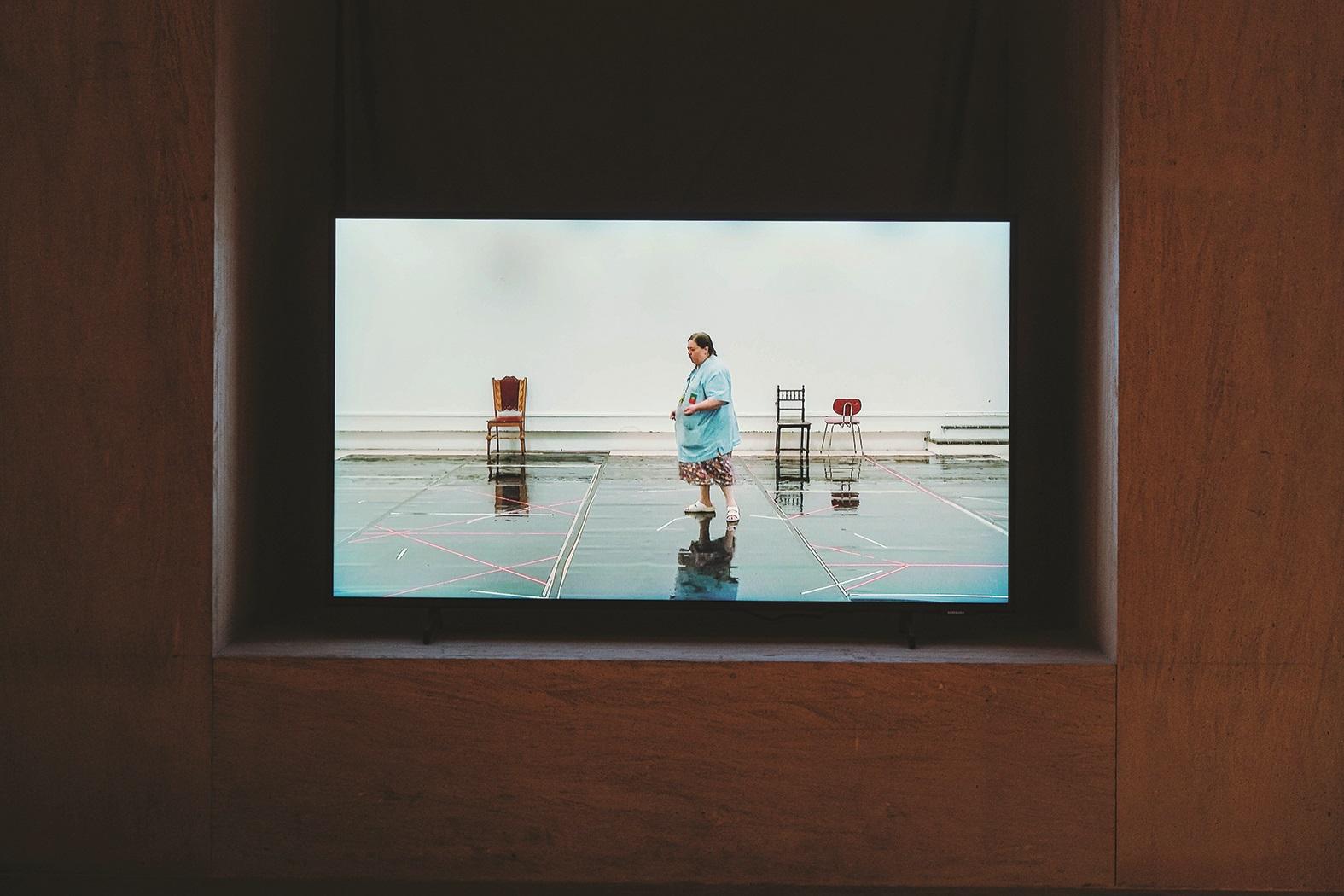 “Even a national history,” says Billard Pisani. “For example, what language you give to your child and what archive you use to retrace and give images to the past.”

The notion of history and archives comes about explicitly in several of the pieces on display. One such piece is Mazmouz’s piece Bouzbir, which deals with the Moroccan district of Bousbir, which from the 1920s had become the district assigned to the French army and reserved for prostitution and the exploitation of Moroccan minors.

“There are very few archives about this prostitution district in Morocco. The postcards displayed in the piece were made by a French photographer living in Morocco are one of the few archives that people have on this. You can still see them and buy them at the market. They give an image to the sexualised Moroccan women despite the orientalist picture they are in,” says Billard Pisani.

Likewise concerned with archives is Julieta Gil’s piece Se va a caer, which is about a prominent Mexico City monument, the Ángel de la Independencia (Angel of Independence), which served as the site of protests focused on violence against women in 2019. In retaliation, the government boarding up the monument and immediately began working on its restoration.

“This piece is also concerned with transmission,” says Billard Pisani. “The women there wrote on the monument their femicide protests and the state covered them. In a way, what Julieta is doing is trying to retrace, to build an archive and transmit the history of women protesting against femicide.” 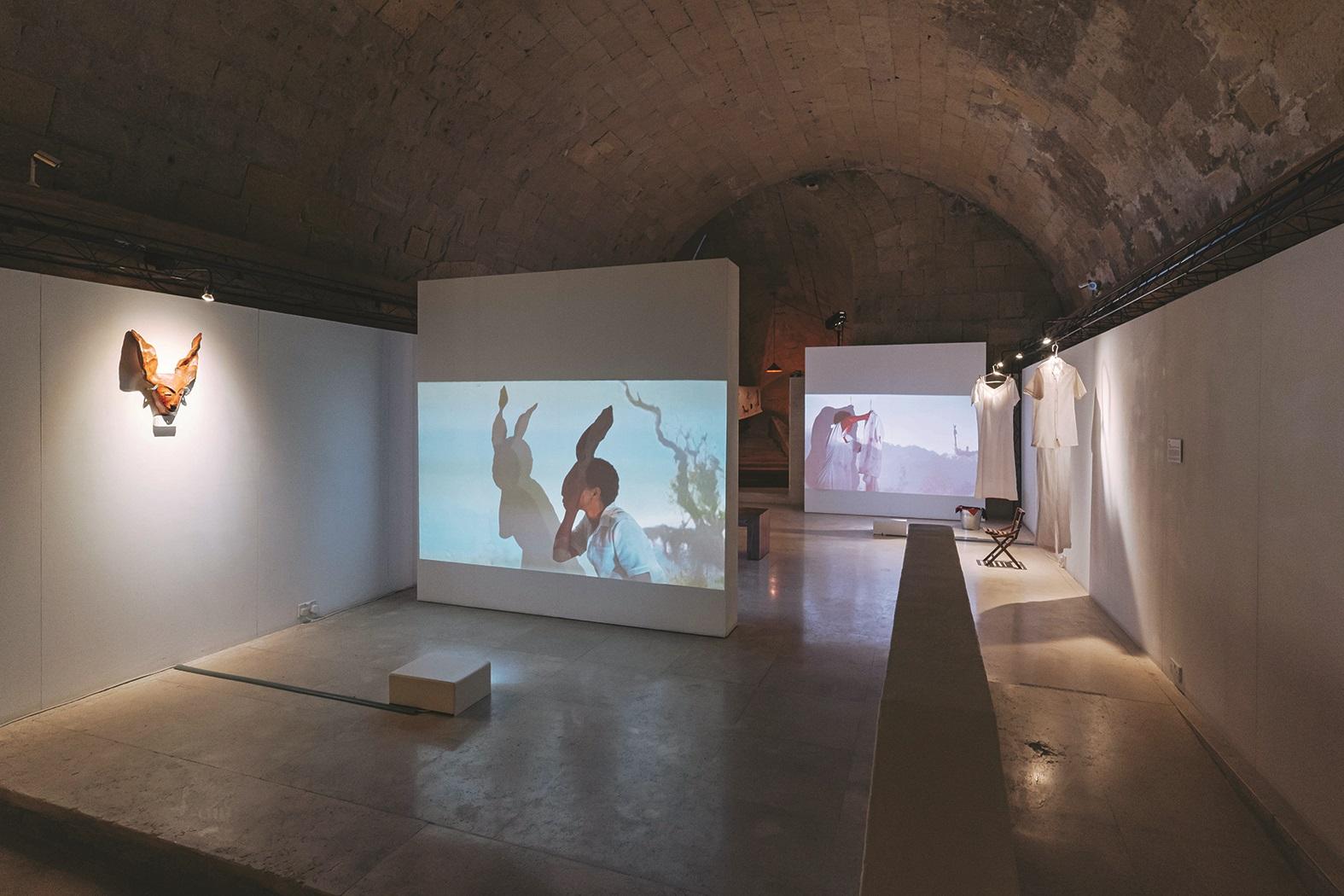 A piece deeply bound up with the notions of transmission, motherhood, the nation and history is Syowia Kyambi’s piece Kaspale’s Playground. The piece pays homage to the famous Mothers’ Protest of 1992 outside the Kenyan government building Nyayo House where, in a desperate attempt to free their sons from the building, a group of women stripped naked in Uhuru Park. The policemen present during this protest had to turn away to shield themselves of this form of curse.

Also bound in several of the pieces is the idea of work, which is a central ingredient to the ordinary lives of women.

“We see this particularly in Charlie Cauchi and Francesca Saraullo’s pieces,” says Billard Pisani. “They are about work and also about beauty. I like that we brought out this idea of work in the exhibition because the ordinary lives of woman aren’t just about motherhood or protest – it’s also mainly about work. An exhibition about women to me had to have an element of labour. Work isn’t a theme often brought out in art.”

Cauchi’s pieces transport viewers to 1960s Soho, showing among other elements archival footage of strippers attempting to unionise. This form of work, often veering into exploitation, can be juxtaposed with Sarullo’s piece Ballerina, showing a woman whose ordinary work gesture is transformed into a magical waltz. 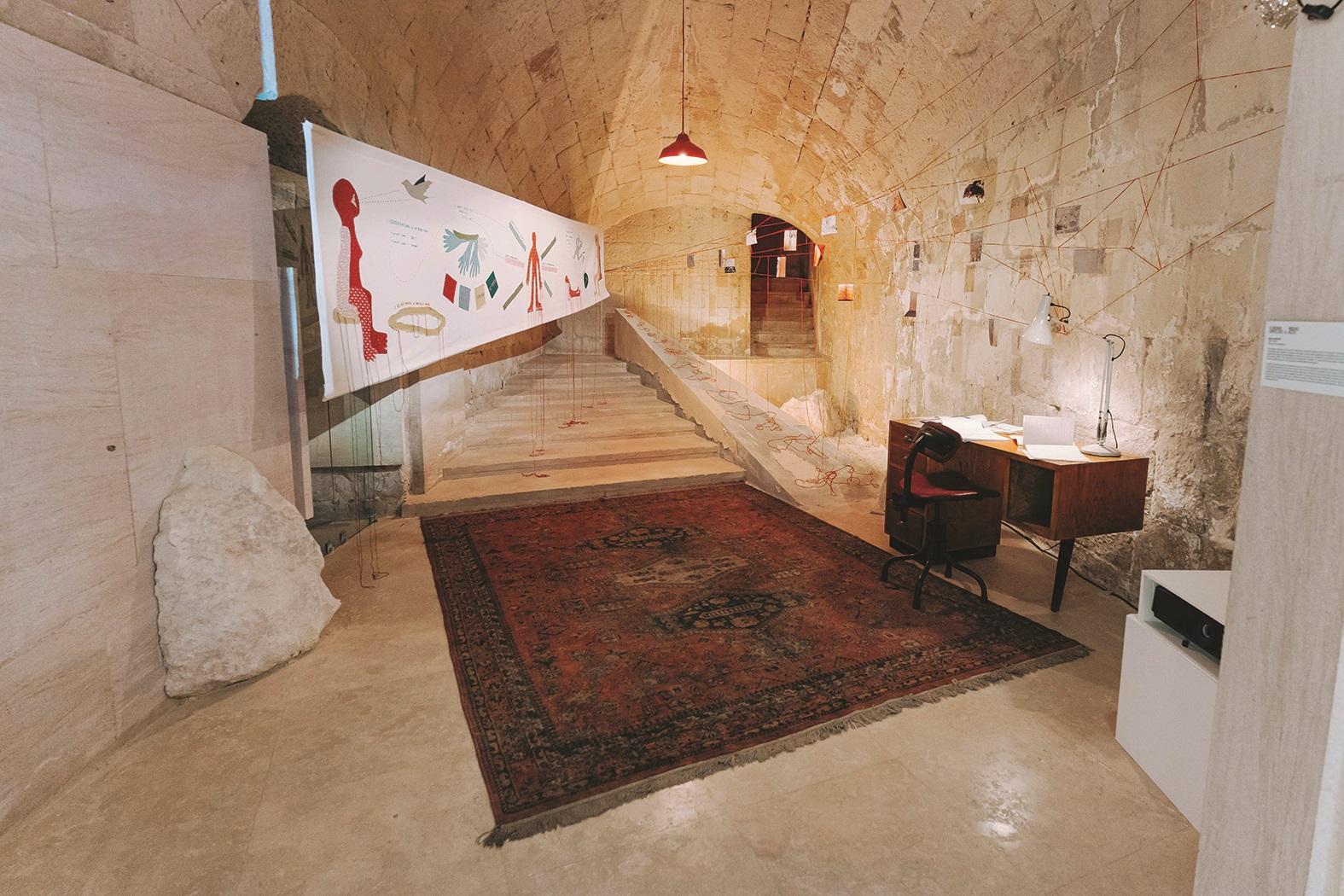 Edith Dekyndt’s piece Nursery Crime is also concerned with work, but also with motherhood and the nation and care. Here the artist is seen cleaning the marble statue of Queen Victoria in Valletta in a performance dealing with one of a very few monuments in Malta representing a woman.

Work, archives and care also come to the fore in Katel Delia’s piece Marie Angèle. The piece deals with the historic traces of the artist’s grandmother – a Maltese emigrant living for some time in Tunisia, France and Malta, sustaining her family with earnings she made when her husband fell ill.

Many of the pieces deal with history, but also power. Kaspele’s Playground is a striking depiction of a poignant historical event where women dispensed their power in a very feminine way. But Billard Pisani notes that this was only successful because everyone believed in the power being transmitted.

Florinda Camilleri and Abigail Agius’s piece place matter(s) was created at Castille Place – a seat of many powers. The curators recount how the artists assumed they had to seek permission to use the space because of its aura.

“Florinda was trying to find a safe place there. But a public space is a place of conflict. There’s always a bit of rubbing shoulders. So instead, the artists wanted to build a brave space – and you do this by going there with others.”

The Ordinary Lives of Women, running at Spazju Kreattiv until March 13, is part of the Spazju Kreattiv 2021/2022 Cultural Programme, and is produced by Unfinished Art Space and BRAŻŻA Art Residency. It is supported by Arts Council Malta, APS Bank, the Melita Foundation, and the Embassies of France and Ireland in Malta.