It’s Monday morning and you have just landed at Malta International Airport. You catch the metro to Sliema, alighting 18 minutes later, and after spending a few hours with family, you walk to Valletta across the Sliema Tigné-Valletta pedestrian bridge for a lunchtime business meeting.

You then catch the metro from Triton Square to University to attend a lecture on public health, before heading to Gozo by metro again, emerging in central Victoria a mere 35 minutes later to attend a book launch at the Citadel.

Welcome to Malta in 2035 just after the inauguration of the Malta metro. This may sound surreal, but it is clearly achievable if important decisions are taken today towards the implementation of sustainable long-term public transport projects.

Malta has reached a junction with two diverging tracks ahead: one based on short-term road-widening strategies with lasting environmental damage, and another based on a long-term mass transit system that addresses the key challenges facing Malta, namely population growth, sustainable transport and environmental protection. The choice is clear.

How can this vision be achieved?

It would be sufficient to construct a single metro line capturing the densest zones of population (urban centres, tourist hotspots and business centres) with the shortest possible length of metro and locating the stations in urban centres.

The metro would be built in three phases, using two tunnel boring machines. The first phase, linking Mellieħa to MIA via Birżebbuġa, would be 25km long with 13 stations, taking five years to construct.

The second phase, linking MIA to St Paul’s Bay, would be 10km long with four stations, taking a further two years to build.

The third phase, linking Mellieħa to Gozo, would be 15km long with four stations, taking another three years to construct. Detailed studies, including geotechnical, environmental and archaeological studies, would take five years prior to start of construction works. A total duration of 15 years.

The entire project, including the anticipated 40 trains, would cost approximately €4 billion.

Part of the link between Mellieħa and Gozo (approx: €674 million) could be eligible for EU funds (e.g. Ten-T programme).

A total of €1.57 billion would be financed by government bonds with maturity over 20 years. The remaining €1.75 billion would be paid by the national coffers, amounting to €175 million per annum over 10 years, which is roughly the same amount the country is spending right now per annum in road-widening schemes.

Assuming a local population of 525,000 by 2035 and 2.5 million tourists per annum, and only one in four using the metro for a return trip every day, then this amounts to nearly 53 million people using the metro every year, with a target revenue of €240 million per annum from ticketing, based on a typical fare of €2 per trip.

The payback period would be halved if one considers other indirect cost savings, notably reduced loss of productivity (due to less time wasted in traffic) which could amount to nearly €75 million per annum, reduced healthcare costs (due to reduced pollution in environment from vehicles) and ameliorated well-being of population. 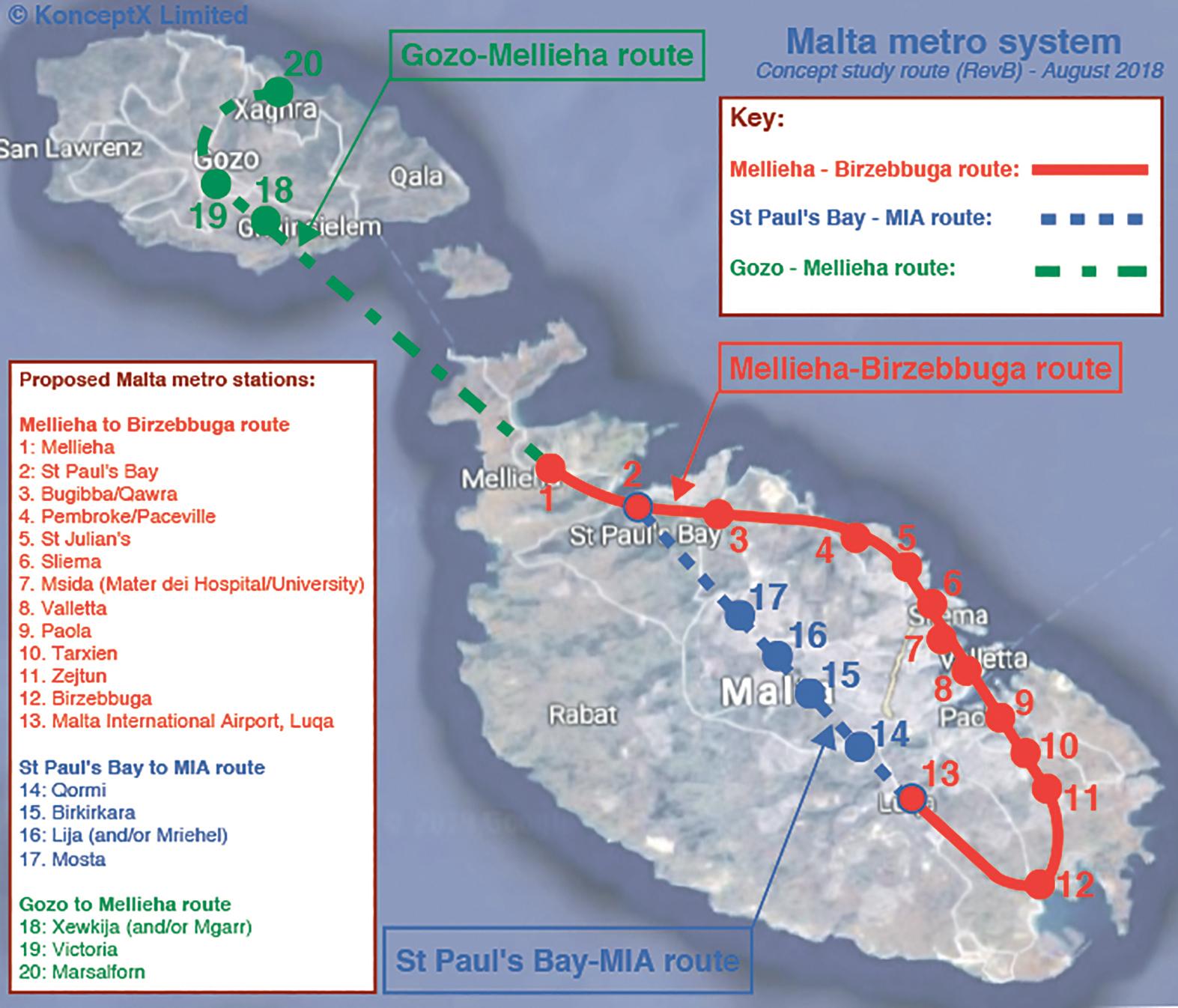 The Malta metro would complement other modes of public transport, including ferries, buses and cycling. The national bus framework would be reconfigured as a system of shuttle buses on dedicated bus lanes from metro stations to other towns not on the tube line. For example, Three Cities to Paola, Rabat to Mosta, Siġġiewi to Qormi, Naxxar to Mosta. Furthermore, bicycle free rental hubs would be located close to metro stations, similar to schemes adopted in London, Paris and other major cities.

The metro would be located at roughly the same depth, with no need of ramps, thus for example not damaging the Pwales valley. The construction methodology of the tunnels, which forms sealed tubes, would entail negligible impact on the water table. This would be substantiated by detailed environmental studies.

The depth of the metro, the predicted ground conditions and the construction methodology used would not affect the structural integrity of the overlying buildings, with only localised pockets of ground stabilisation required, if any.

Lastly, the metro would be seismically designed, including the subsea tunnel between Malta and Gozo.

Below vs over ground

An underground metro with stations (each the size of a large house) located in urban centres would entail minimal visual impact on the urban and rural landscapes and would be within easy reach of the communities it links. This is a major advantage an underground metro would have compared to over-ground systems, such as mono-rails, which would need to be located away from town centres to avoid causing a huge visual impact on the urban environment due to the cumbersome structures required at street level. An over-ground system would also pose an increased risk to yet undiscovered archaeology.

The total amount of inert waste generated would be around four million cubic metres. Subject to detailed environmental studies, the inert waste could be used for land reclamation to form a nature reserve. This could be complemented by an offshore wind farm and/or an offshore solar farm with the renewable energy created connected to the grid, thus offsetting the energy demands of the metro system and complementing the sustainability credentials of the whole project.

The government has publicly said it has commissioned studies for a metro. It is now time to act. This is the most urgent decision to be taken for Malta’s future.

Dr Konrad Xuereb is a director at KonceptX, an architectural and structural engineering firm with offices in Malta and London.